Pesto Zoodles with Broccoli and Bacon 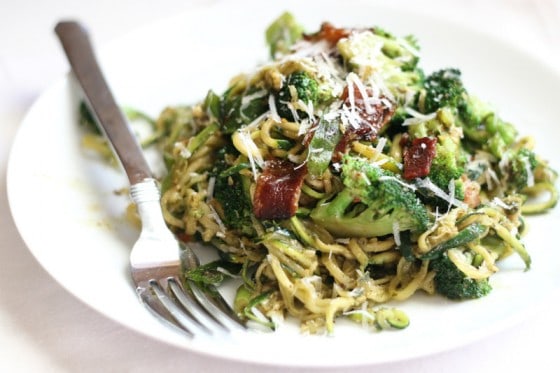 You may have guessed that those “noodles” aren’t really pasta, but julienned zucchini. Zucchini noodles are a great alternative if you’re eating paleo, gluten-free, or low-carb. I feel like I’m the last one in the blogosphere to try them out.

At the end of 2015 I finally got this spiralizer, and I’ve been happily using that instead of the julienne attachment on my mandoline.

by Patricia Wells where she sprinkled the julienned zucchini with salt and let it rest in a colander to extract the moisture. In that particular recipe, she just tossed it with a simple creamy dressing and was finished. I squeezed it out a little, then threw it in a pan for a few minutes to warm up.

I was surprised at how the texture and appearance of the zucchini resembled actual pasta. I think I even giggled a few times. My kids were hesitant (I’m still trying to get them to like zucchini. Tonight we made some progress!) but I think after a few tries they’ll be slurping up those “noodles” like nobody’s business.

Especially if it’s got bacon sprinkled in it. Bacon is my insurance if I’m not sure if something will turn out well. Throw a little bacon in and a mediocre dish will rise to “pretty good” status. Instantly.

I really don’t think I needed the insurance with this, though. 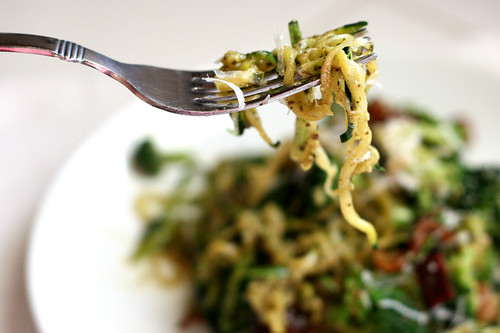 Disclosure: This post contains a Amazon affiliate links. Purchases made by using these links won’t cost you any extra and give Perry’s Plate a few pennies to help maintain the site and sponsor giveaways. 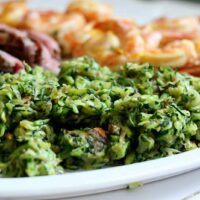 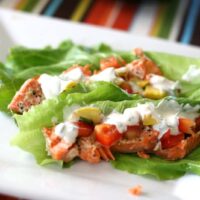 I am really wanting to try this recipe but I do not have a mandolin! I do however have the kitchen aid spiralizer attachment. Do you think that would serve the same purpose?

Thanks! This recipe looks incredible.

Oh you don't need a mandoline. I posted this before the spiralizer craze, so spiralize away with your attachment! Enjoy!

Tried this last night and really liked it. I will definitely make again. Using the mandolin took the most time; everything else was a snap. I was very cautious, though. My mother hurt herself very badly on one when she tried to use it without the guard - won't make that mistake!

We tried this recipe today, and we absolutely loved it! I altered it a bit - we didn't use broccoli (as it isn't in season and I can't find it anywhere), and added thin slices of sundried tomatoes. My boyfriend was thrilled - we will certainly make it again! A winner!

I might add we're on a keto diet, and we live in Italy, where most people eat pasta every day, and for me this is a lifesaving substitute for all those carbs, and a great way to add extra fat in a dish, with lots of cheese,olive oil and butter fried bacon :)

Just wanted to let you know I made this for my husband and myself tonight and it was wonderful!!! I didn't use bacon (for health reasons) so I sliced up some cherry tomatoes and mixed them with olive oil and garlic and roasted them, then also chopped some portobello mushrooms up and sautéed them in place of the bacon. Just tossed it all together in the end. It was delicious, although I'm sure the bacon is 1000x better! But we'll definitely be having it again!

Thanks for the awesome recipe! I'm bookmarking your page! :-)

i made this tonight it was delicious. what a great base for pasta dishes!