Posted on Last updated: May 16, 2019 Categories Breakfast, Other Sweets 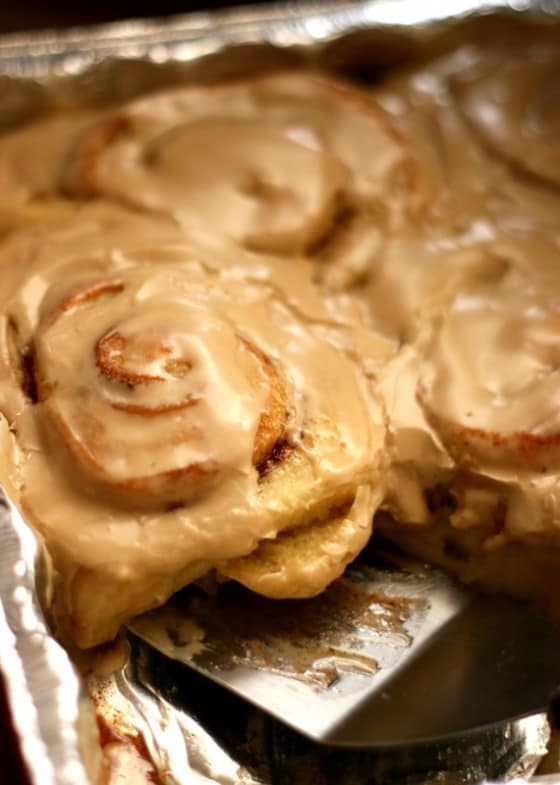 Hey there! You may be wondering what this recipe for cinnamon rolls is doing on a paleo-ish food blog. Well…. it dates back to when I wasn’t a paleo-ish blogger, and it’s one of our favorites. And it’s apparently one of your favorites, too, because it’s been flying around Pinterest like crazy for the past few years.

Eventually I’d like to clean it up and make it (at least) gluten and dairy-free, but in the meantime it’ll stay and have a home here on my blog as totally-worth-it recipe we’d indulge in.

I tend to get dramatic when I talk about desserts around here, which is seldom. Really, have you noticed? This is only the 9th “dessert” post I’ve posted this year. A while ago I decided to cut back on baking. I love to bake, but let’s face it. . . baked treats aren’t good for you. And they’re dangerous to have sitting on the counter when you have little self control. (like me)

So I decided only to bake for special occasions. Like birthdays. Like when a 2-week cookie craving won’t go away. Like when someone in my family comes to visit. (That doesn’t happen much. We do most of the traveling.) The latter is why I made these cinnamon rolls for the second time this year. (I made them back in January, but didn’t get a photo because I was too busy stuffing them in my mouth. True story. I ate six in one day.)

I’ve tried a lot of cinnamon roll recipes in my years of baking and occasionally find a new “favorite”. Well, people, this one just rose to the top and clobbered the rest with its gooey, sticky goodness. Pioneer Woman cinnamon rolls are, like, an institution.

According to Pioneer Woman (and I completely agree), the problem with most cinnamon rolls is that there’s too much bread and not enough goo. People fight over the center of the roll, but with these, there’ no need for that because . . .

If you don’t like gooey-sticky cinnamon rolls, then you would absolutely hate these. For the rest of you, . . . at least try them once in your life. Life-changing? Absolutely.

By the way, this recipe makes about 50. I did the whole thing back in January and filled two rimmed cookie sheets. This last time I halved the recipe and made them in those little disposable foil baking pans and froze them. Pre-frozen or fresh, they turn out amazing. And I love that you can just make the dough and stick it in the fridge for a couple of days until you find a few minutes to finish them. 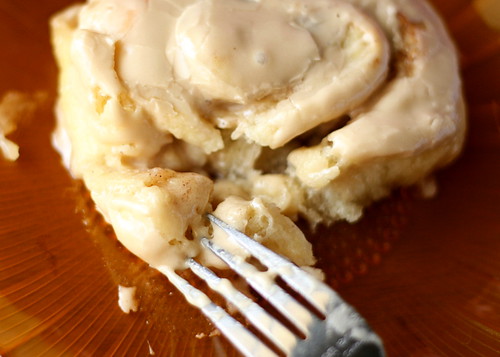 I tweaked Pioneer Woman’s cinnamon roll frosting because I don’t use coffee in anything I bake (or cook). So I added some cream cheese and maple flavoring to the frosting instead. Holy cow — they taste like maple bar doughnut frosting. Absolutely incredible.

I also use avocado oil instead of vegetable oil and usually swap out the milk for almond milk. It’s still super tasty. I’d love to make a gluten-free version of these, but honestly, I’d just rather have the real thing. 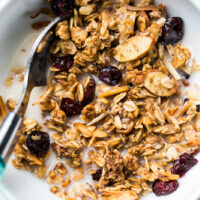 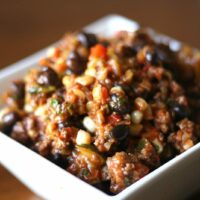 I have made these the last 2 years and LOVE them!! I thought that vegetable oil was used instead of avocado oil? Does this change the taste?

Aren't they amazing?! Yes, the original recipe had vegetable oil, but I've been going back and editing my recipes to better reflect how we eat. I stopped using vegetable oil years ago and found that avocado oil is a really good replacement. It's flavorless and you can use it in any recipe that calls for vegetable oil.

Think these would work at all with an all purpose gluten free flour? And could I still freeze them? My family wants gluten free cinnamon rolls for Christmas but I learned my lesson about trying to be all gourmet at 5 am. ;))

Oh man. I have no idea, but I want to try it now! I've heard that if you use some xantham gum with the GF flour, then it helps it to hold together better. It may depend on the GF flour, too. Baking is so finicky. Let me know if you try it!

I make these every year for Christmas and people beg for them.  They are that amazing. A few issues it seems people have. 1) I don't drink coffee either. I have made these using a glorious cream cheese maple frosting that uses real maple syrup and it's amazing. I have frozen these to cook later with frosting packets inserted and it works really well. I have also purchased instant coffee that comes in individual 1 cup servings and the same package has been in my cupboard for 3 years. I only use it for this recipe and the frosting is awesome.  It's a toss up which one is better and my kids all agree. 2) for those having problems rolling them. It takes a bit of practice but it's a matter of pulling the dough slightly and then rolling them. Pull roll, pull roll, and so on. The dough snaps back and makes a nice and tight roll. It just takes a gental pull. Just a bit of stretch for that snapping to happen. At the end, I pull the end up and over with that same pull. It works every time. Cut with a sharp knife. These are the best.

Thanks for the tips, Laura!

Hello, I've made 2 batches of these and each time I roll the dough out it is just a story mess. I refrigerate the dough over night and take it out just as I roll the half and I place it out on floured parchment (did just counter top too) . As I roll it up it just becomes too soft to stay in the roll form. I've only used only 1/2 c butter to a cup of butter and still have the same results. Right now I rolled it as tightly as I could in parchment and stuck it in the freezer to firm before cutting in hopes that they will stay together! Help any suggestions are welcomed!!

I'm sorry to hear that, Jen! Unless I'm standing in the kitchen with you, it's hard to say what went wrong. I've never had any problems like you described.

I make these for family and friends when I need an excuse to make them.. They are the BOMB! Everyone loves them! Hmmm...New Year's Eve party is coming!