This paleo sweet potato hash is easy to make and flavored with spicy turkey chorizo! This is one of my favorite breakfast recipes and also doubles as a tasty taco or burrito filling! It also makes a great meal prep recipe and warms up beautifully for a healthy meal the next day or a make ahead breakfast during the week.

Did you know that I used to hate sweet potatoes? My only experience with them was the marshmallowed-topped sweet potatoes at Thanksgiving. I know a lot of people like those. I am not one of those people.

Putting sweet potatoes in a breakfast hash was what converted me!

It’s a great way to introduce sweet potatoes in a different context to someone who might not like them. And it makes a big breakfast that isn’t some kind of baked good.

Don’t get me wrong — I love sweet breakfast foods, but not necessarily in the morning. Maybe I’m getting old, but my body doesn’t love that.

If you’ve ever made a breakfast hash and ended up with a big soggy mess?

Or a giant scramble in that cast iron skillet? I’ve got a few tricks for you. First things first — here are my tips for getting the best results out of this sweet potato hash recipe…

If you do it this way, you’ll have better flavored meat, vegetables, AND little chunks of scrambled egg instead.

At the end I like to top mine with some fresh cilantro or sliced green onions. And some Mexican cotija cheese, if I happen to have any on hand.

OH, and guac. It’s amazing with some guac. Here’s a recipe if you need one: Homemade Guacamole.

Do I have to peel the sweet potatoes?

Nope. I do because I like them better peeled, but it’s not necessary. Leave the sweet potato skin on if you like!

There are a lot of ways to adapt this recipe to make it your own!

Change up the meat

I mentioned this earlier, but you can use another type of quick-cooking meat here, like bacon, sausage, or diced ham. I like turkey chorizo, which might not be found in all grocery stores, though. Jennie-O makes a good one and so does Diestel. You can even use leftover shredded beef or chicken! Just toast it for a bit in the skillet at the beginning.

If you’d rather have a meatless hash, go for it! I’d recommend adding some seasoning to the potatoes to boost the flavor. I usually use my Sweet Potato Fry Seasoning in things like this. Any Mexican-inspired or tex-mex type of seasoning blend would work well here.

I wanted to make this has easy and not so labor intensive, but you can definitely add some diced red bell peppers, zucchini, sliced Brussels sprouts, or any other kind of quick cooking vegetable. If you loathe chopping onions, use some dried minced onion or some onion powder. Same goes for garlic powder.

If you’re a purist, use white potatoes. You may need a little extra oil in the pan and a little more time to get them cooked all the way through and browned well. Don’t use olive oil unless it’s “light”. Use a heat-safe oil that can handle higher heat cooking like avocado or coconut oil.

Change up the eggs

If you like a fried egg more than scrambled, make some fried eggs in a separate pan or create a few little pockets in your hash and crack eggs into them. Cover and continue cooking until the eggs are done as much as you like. (I love me a runny egg.) If your pan is oven-safe, pop it in the oven to finish off the eggs.

Sweet Potato and Bacon Breakfast Hash — This is a more traditional (not Latin flavored) hash. You can’t go wrong with bacon.

Crispy Oven Sweet Potato Hash Browns — All you need is some grated potatoes, some good cooking fat and a sheet pan. (A food processor is nice, too, but not necessary.) Click over to find my little trick to make them taste like they’ve been fried!

Chicken Sausage Breakfast Bowls with Sweet Potatoes — This is a “deconstructed” hash with some roasted potatoes and homemade chicken breakfast sausage!

Roasted Ham & Shredded Brussels Sprouts Hash — A similar has situation, but entirely made in the oven!

Paleo Sweet Potato Waffles — I know I said I prefer savory breakfast food, but this might be an exception. If you make this recipe, get a large bowl out because it makes a lot of waffles. (Freeze them for later!)

1. Feel free to swap out the meat for bulk breakfast sausage, bacon, or diced ham. 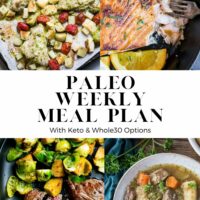 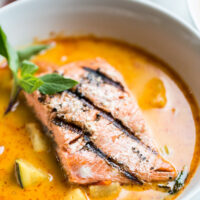