I really don’t think the blogosphere needs another tortilla soup recipe. Heck, I’ve posted similar recipes already, but this one was different. (Doesn’t everyone say that?) I had an epiphany as I was making this. I’ll tell you about it in a sec.

First I wanted to mention that this recipe came from Beso Restaurant, owned by Eva Longoria-Parker. This is actually her recipe that was printed in a recent issue of Food Network magazine. Does the fact that this soup came from the mind of a Desperate Housewife make it more appealing? Just curious. 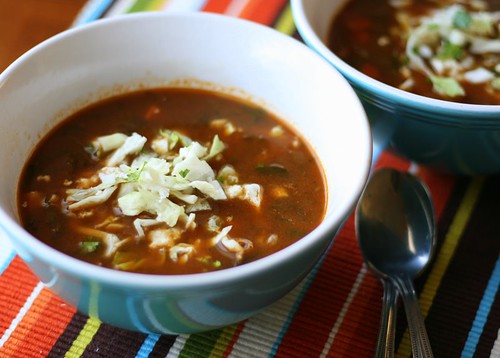 There are probably a lot of other, easier ways to make tortilla soup. But if you’re a cooking-from-scratch junkie, then you’ll like this a lot.

See those dried chiles down there? I see them all the time in the grocery store and they usually frighten me. They’re slightly menacing looking, and I never knew what to do with them. Until I saw this recipe. 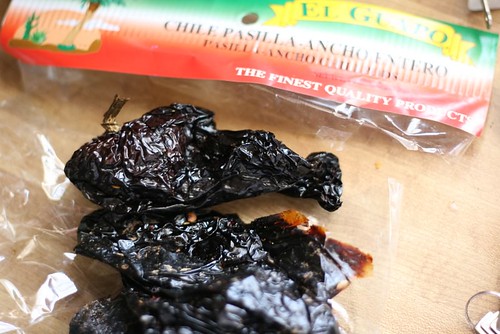 Ancho chiles are actually dried poblano (or pasilla) peppers. After soaking them in hot water to soften them, they get made into a kind of chile paste. 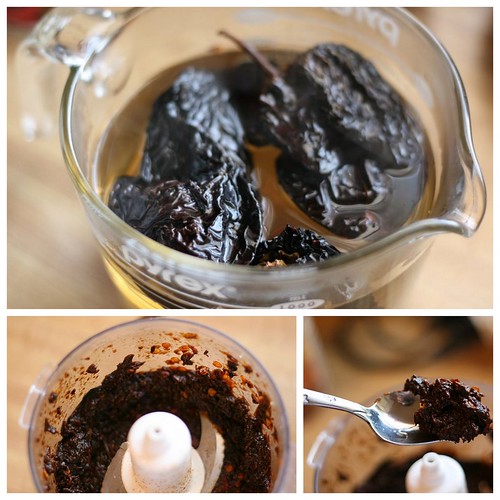 As the soup started coming together and after I added the chile paste to the broth, I had my “ah-ha” moment. Tortilla soup usually has chile powder . . . made from chiles. . . that were probably whole at some point in their lives. And chile paste I had just made was probably none other than. . . 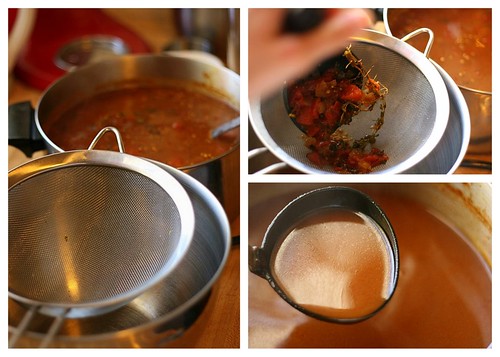 After the solids are strained out (That seemed a little wasteful to me, but I got over it. You could also puree the whole thing together after removing the non-edibles, but then it wouldn’t be brothy.) you’re left with this wicked-tasting broth that’s basically a bare canvas for customizing your own tortilla soup.

After the broth was finished, I added a few quick-cooking add-ins (notes in the recipe), and topped it with some Southwest Cabbage Slaw — my new favorite topping. 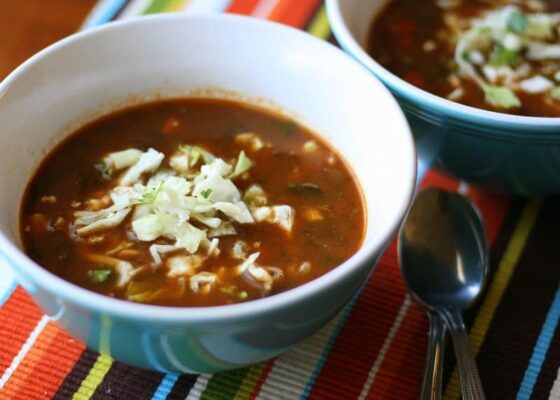 Nat's Notes:
1. Alternately, you could put the strained broth back into the pot and add whatever quick-cooking add-ins (like beans, frozen vegetables, chopped spinach, etc.) you like and let it simmer for few more minutes. This is a great base to customize your own soup!

2. In the photos above, I topped it with some Southwest Cabbage Slaw instead of tortilla chips. That stuff is so versatile. I put it on a lot of things! 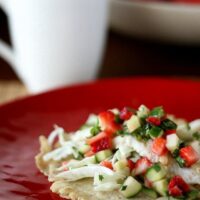 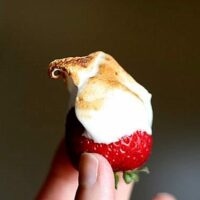 Today, I went to the beach front with my children. I found a sea shell and gave it to my 4 year old daughter and said "You can hear the ocean if you put this to your ear." She put the shell to her ear and screamed. There was a hermit crab inside and it pinched her ear. She never wants to go back! LoL I know this is completely off topic but I had to tell someone!

We love tortilla soup and I decided to make yours several months ago and it turned out so well that it is the only recipe I have been using for out tortilla soup. Everyone loved it and wondered what I did different to the soup to make it taste better! :)

I made this soup and really liked it! I especially loved the southwest slaw piled on top. I recently made the slaw again to go with some Thai Peanut Noodles and it was delicious! Thanks for the recipe.

I definitely never realized that eva longoria could cook! Crazy stuff. And is there really such a thing as too many tortilla soup recipes? I think not.

I've been wanting to try this recipe since I saw it in the magazine... Yes, it does make it even more appealing since it's Eva's recipe! I love Desperate Housewives and she's my favorite character on the show!

Not too sure about the slaw on top of the actual soup - but it would most definitely make a great side dish!