These tasty cloud-like strawberry soufflés are only FOUR ingredients! They’re paleo friendly and easily made keto/low-carb, too. 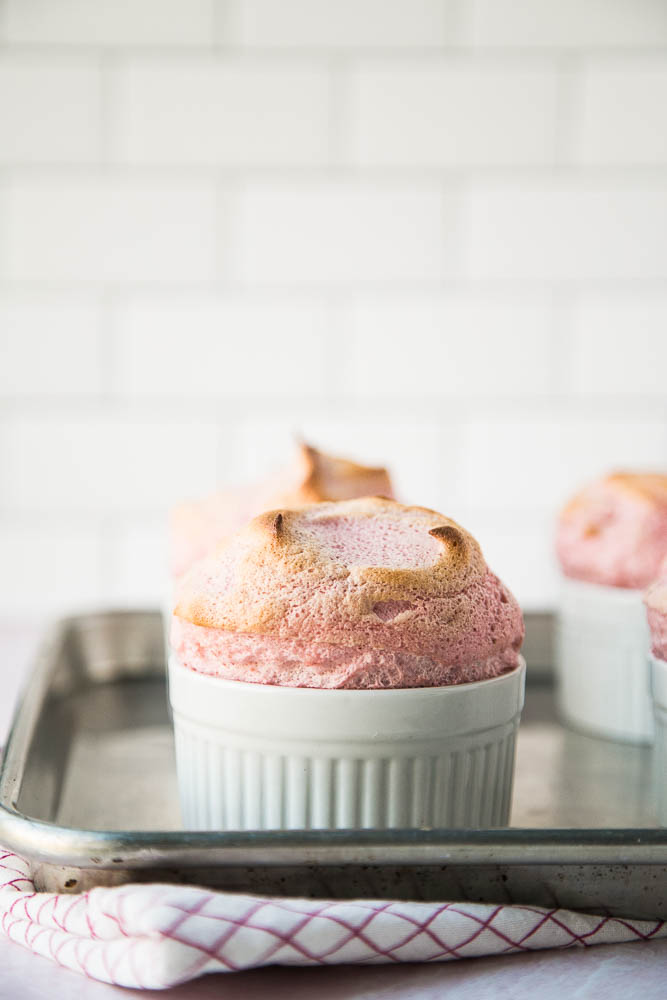 **This recipe was updated and rewritten on 2/10/21 for more clarity & consistency.**

I think we’ve been conditioned as a culture to fear souffle baking.

How many cartoons did you watch as a kid where it showed a front door slamming and immediately cut over to the kitchen where it shows a souffle falling in the oven?

They’re really not that temperamental. Feel free to slam a door or two while you make these. 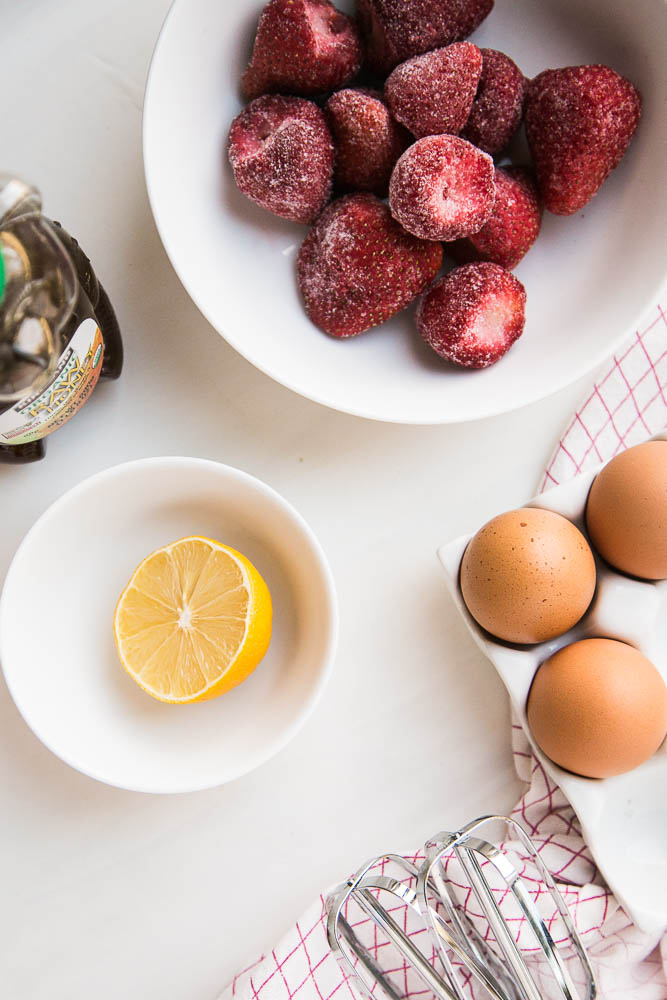 If you’re comfortable working with egg whites, then these are a cinch and they only take about 30-40 minutes from start to finish.

These were inspired by a recipe from an Austrian dessert cookbook I used to have. The recipe intrigued me, but it needed an overhaul because it was REALLY poorly written.

Like, lots of important steps missing. And no indication of the size or number of ramekins. Yikes, man.

So, I cleaned it up for you.

Oh, did I mention this recipe only has four ingredients?! 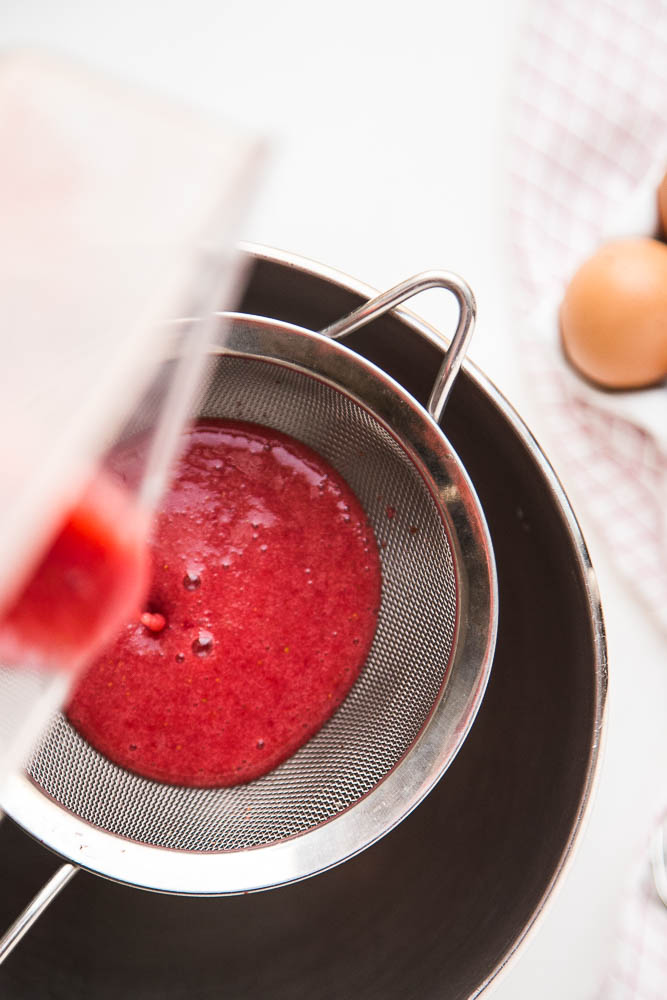 How to make Paleo Strawberry Souffles

First, buzz up your strawberries — either in a blender or a food processor.

Then, strain the seeds out. I strain them right into the bowl of my stand mixer with a fine-mesh metal strainer. 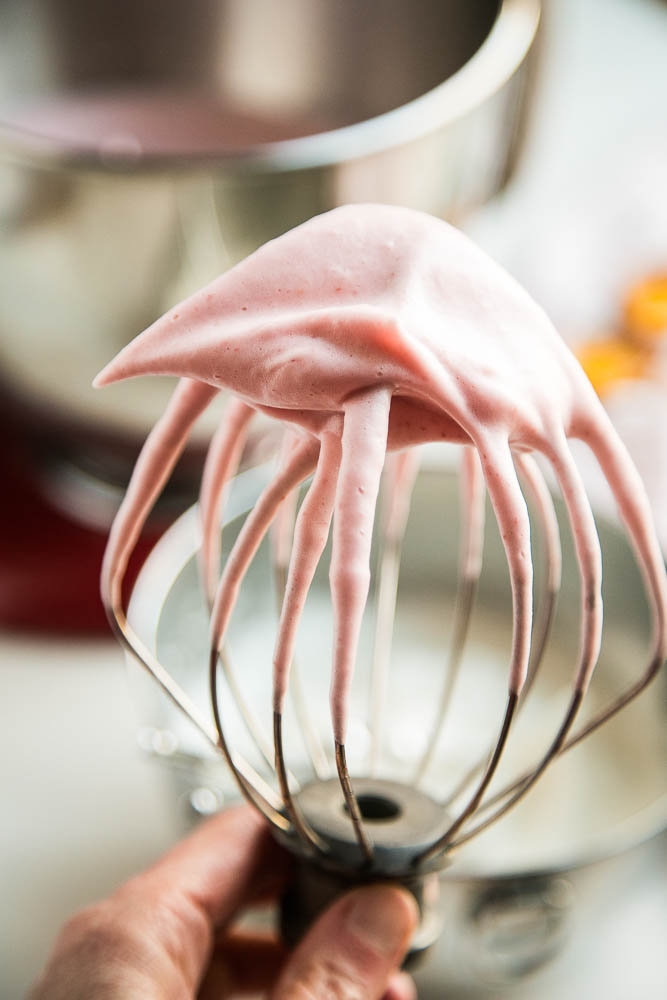 After adding the lemon juice and part of the egg whites and sweetener, it gets whipped like crazy.

The first time I made these I was surprised that you could add that many ingredients to egg whites and still have them fluff up that nicely.

You end up with this bowl of fluffy, pink heaven. Seriously, stick your finger in that strawberry fluff. 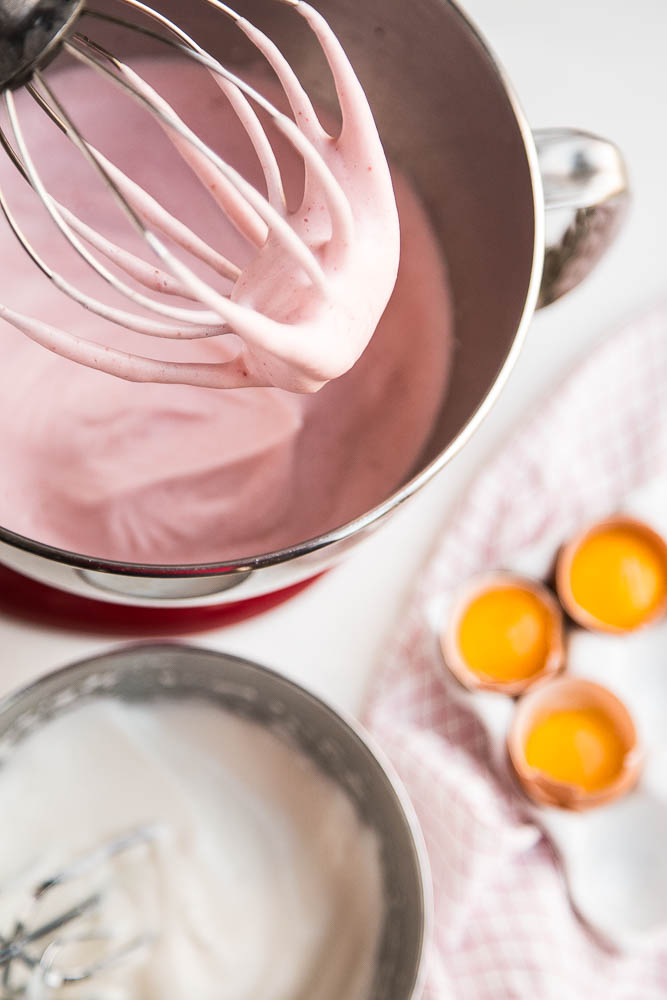 See that bowl on the bottom with the white stuff?

That’s the other part of the egg and sweetener. That will get whipped up as well and make more of a meringue-type of thing. 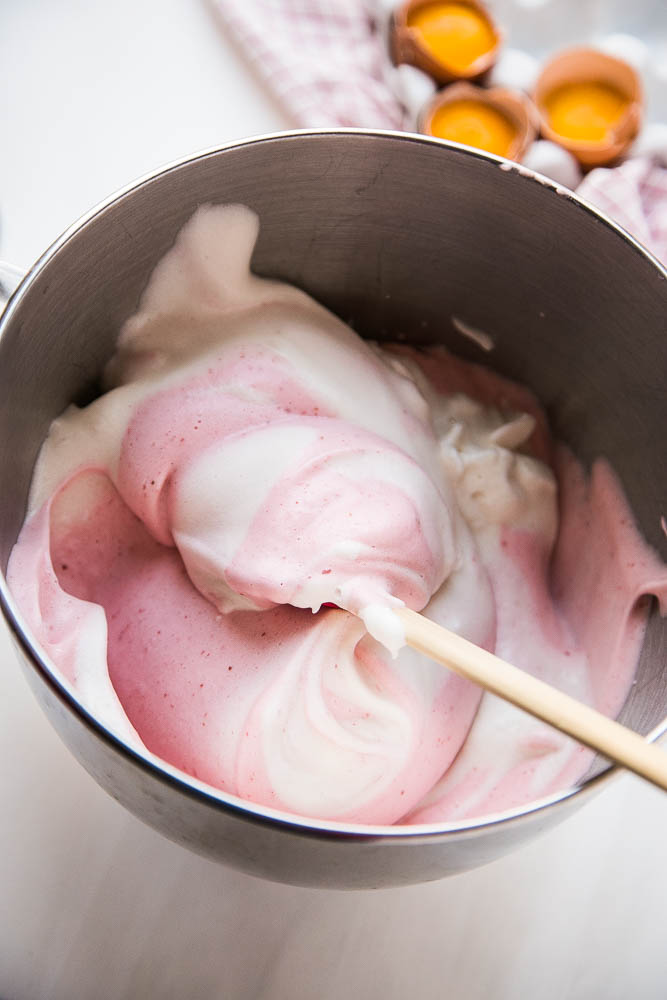 Aren’t those swirls so pretty?? 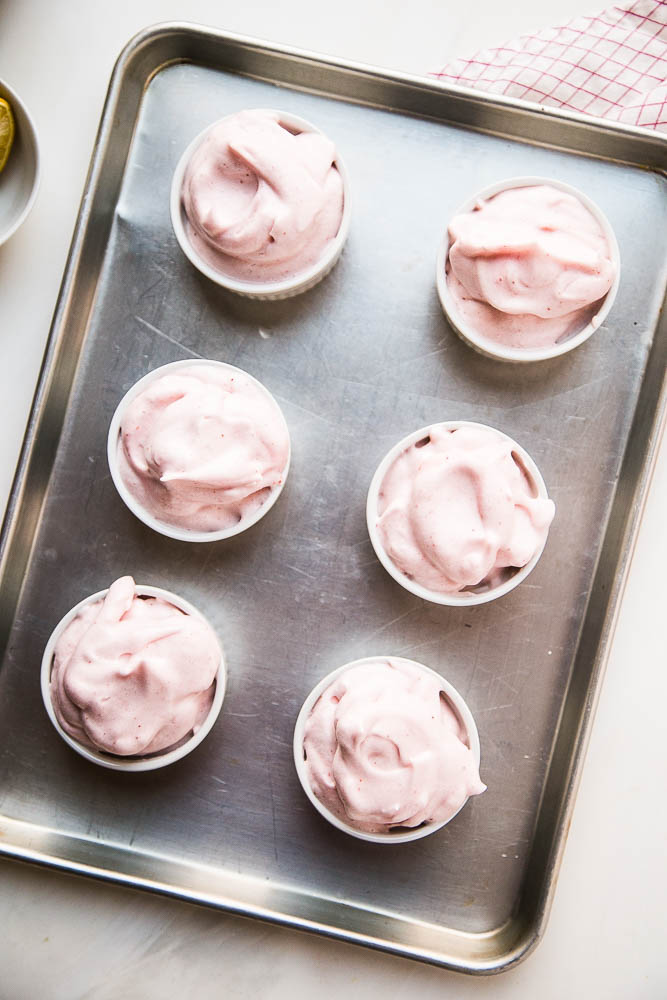 Pile that strawberry fluff into 6 ramekins. Pile them high.

They puff up, but they puff STRAIGHT up.

There will be a little bubbling around the edges, but very little will ooze out of the ramekins, if anything.

I have these 6-ounce ramekins on Amazon and I use them a lot. You could use 8-ounce ounce ones, if that’s what you have. 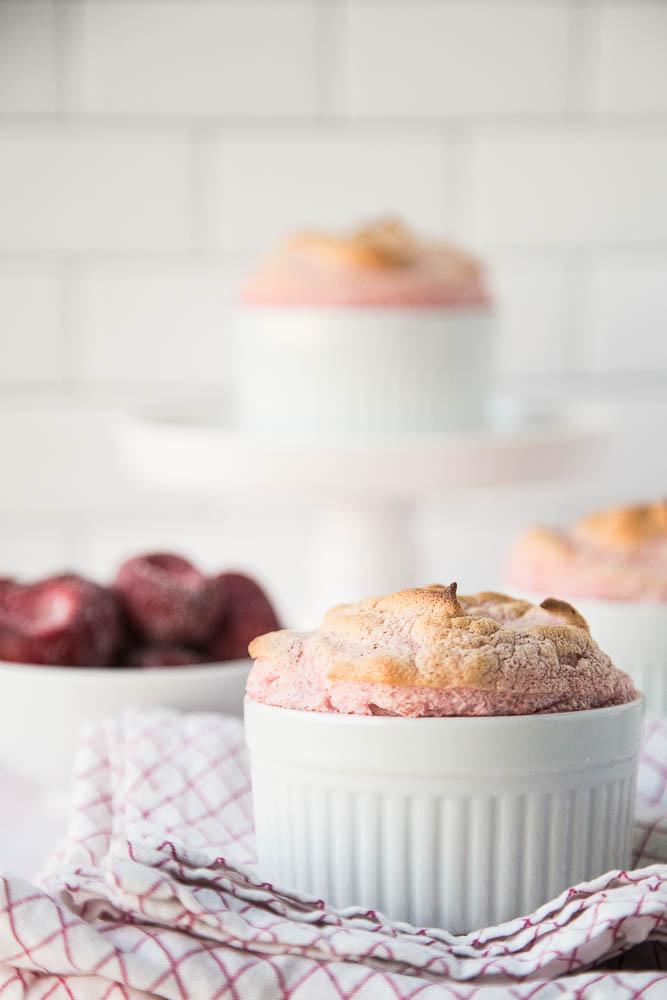 Is it normal for soufflés to fall?

A couple minutes after they come out of the oven, they’ll start to fall.

You can eat them as soon as they’re cool enough not to burn your face off. 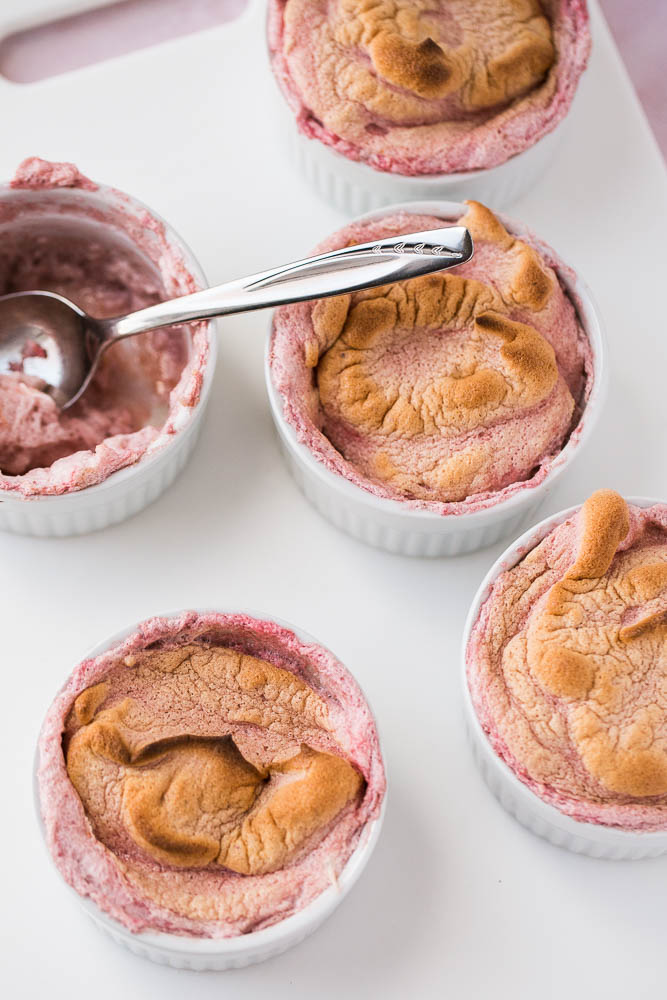 When they finish falling they’ll be slightly lower than the edge of the ramekin.

If they fall all the way down to the bottom of the ramekin, then something is off. Maybe overbeaten egg whites or too much puree?

Can you eat strawberry soufflés cold?

Yep! You can refrigerate these strawberry soufflés and eat them chilled.

(We actually liked them better chilled!)

My daughter likes hers frozen! 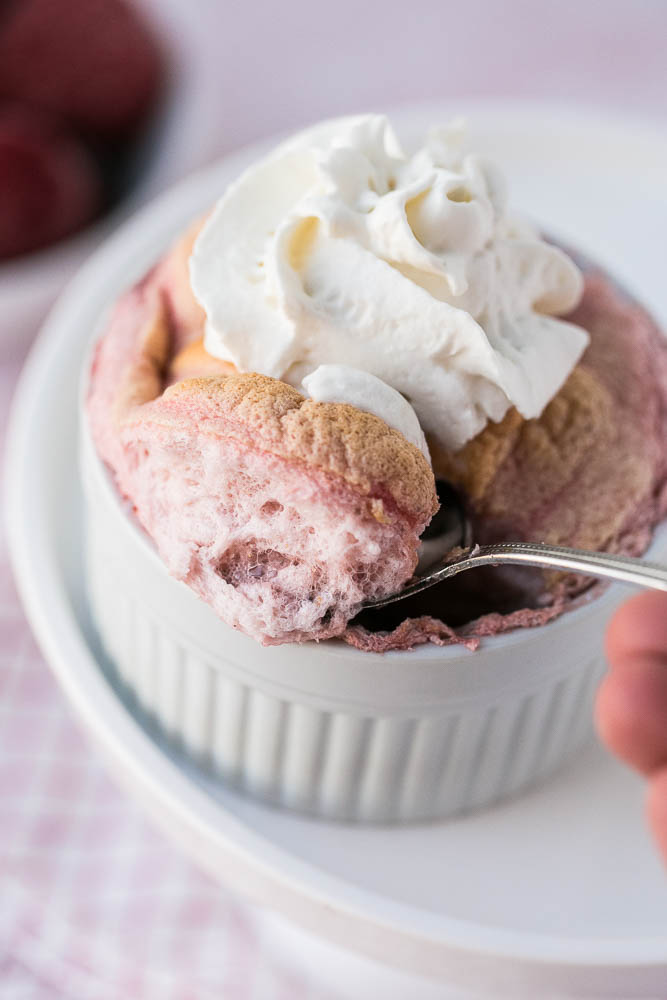 If you want, you can throw a little whipped cream on top. I’ve see sprayable coconut and almond milk whipped cream at Trader Joe’s and other grocery stores.

I love that there are dairy-free options now!

(Although the real thing is pretty fantastic.) 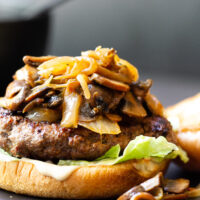 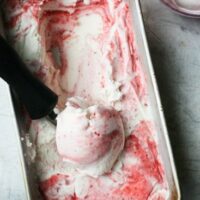 First time I've tried making a souffle...and oopps, it flopped! LOL I usually have very good luck with first time recipe tries, but I know what went wrong. I followed your directions, and the pre-oven mixture was perfect! However, I used 8-ounce ramekins, and they needed to be in my oven longer than 15-16 minutes. When I removed them after 16 minutes, I cut into one and the mixture was not baked through. Of course, they immediately sank to "ground zero!" LOL I used raspberries instead of strawberries as I'm allergic to strawberries. The change of berries did not matter, the souflles tasted fantastic despite their sink hole look. I am going to make again, and this time leave in for 20-25 minutes before removing. I know they will come out picture perfect! Thank you for sharing this recipe!

I'm glad you were able to troubleshoot it yourself! Raspberries are a great substitution!

I don’t know what I did wrong, but it turned out as just hot, pink foam. :(

You may have done it correctly. These souffles are really foamy and light -- there isn't a lot of substance in them.

Strawberry Pudding Souffles based your posts and content is really interesting and also i shared your blog link with my friend.

I had a similar Strawberry Pudding Soufflés at a restaurant recently and found myself craving it and wondering if I could recreate it today. Thanks, Natalie!

Thanks for sharing! Do they keep long?

They keep for a few days in the fridge, but they won't be puffy again.