It’s rare that I’m eating the very thing that I’m writing about, but here I am, munching on one of these Paleo Samoa Cookie Bars and chatting about them.

Paleo baking tends to be nut-heavy and use a lot of nut flours and nut butters. That is sometimes disappointing for those with nut allergies or those who don’t tolerate a lot of nuts well (like me).

I’ll talk about my favorite grain-free, nut-free flour below!

The bottom layer of these Samoa cookie bars are a chewy coconut-filled shortbread. Like I said earlier, these are nut-free, so no almond flour here.

I used cassava flour which has become my favorite flour for grain-free baking. I get Anthony’s brand on Amazon, but you can find some at a natural grocer and some well-stocked traditional grocery stores.

I’ve made the crust with and without a food processor and it’s delicious both ways. Using a food processor makes it easier and quicker and the resulting cookie less crumbly, but you can totally make it without.

In the middle of these Samoa bars is a thin layer of chocolate. Finding dairy-free chocolate has gotten so much easier these days. My favorite is Lily’s because it’s also stevia-sweetened.

This is my favorite part. This creamy caramel sauce is mixed with a bunch of toasted coconut to give a nice, sweet, chewy texture. Kind of like a candy version of the German chocolate cake frosting.

It’s ridiculously easy and is a great dairy-free alternative to regular caramel sauce.

Basically you simmer a can of coconut milk with some sweetener down to a cup. It takes some time, but if you start this part at the beginning, it’ll be ready by the time you add it to your cookie bars.

I can see a lot of fun uses for this sauce. It may pop up in other recipes later on. :)

How GOOOOOD do these look?!

Having made (and eaten) several batches of these, I can tell you that they don’t last long. Steve loves them, too, as well as the kids who don’t mind coconut.

If you’re wanting something rich and fudgy, make some Paleo Chocolate Chip Fudge Bars. They remind me of the swirled oatmeal fudge bars I ate as a kid.

Flourless Peanut Butter & Jelly Bars only have 5 ingredients! Use any kind of nut butter you like if peanut butter isn’t your thing.

Save some leftover cranberry sauce from Thanksgiving and make some Paleo Cranberry Orange Bars! 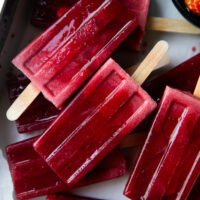 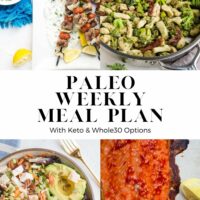 Do you think using dates as a sweetener in place of the coconut sugar would work? I’m thinking medjool dates. If so, where would I find information on how many dates would replace the amount of coconut sugar suggested for this recipe? I’m looking forward to trying these!

I don't recommend using medjool dates or date paste since it will change the wet/dry ratio in the cookie part of the recipe. You could use date sugar, though, or any other granulated sweetener. Also, the caramel sauce wouldn't work well either. There are date caramel recipes online though that you can find with a quick google search.

I cannot wait to try these! Any chance of subbing tapioca flour for the cassava?

Hi Dana! I haven't tried these with tapioca flour, so I can't guarantee how they'll turn out. My best guess is that it would probably be OK, but it might change the texture.