You’re going to love these.

Remember the Paleo Cookie Dough Bites I posted forever ago?

Well, I made a brownie bites version. And, dare I say, they’re even better than the others?

They’re super quick to whip up, too. You can use a food processor if you want. Doesn’t that look like extra-thick brownie batter? Swoon.

If you happen to have a five-year-old around, they’re usually more than happy to stick their hands in food and “help” — mine sure is.

I tried to get these done really quickly before the two-year-old noticed because we’re working through some allergies, and I didn’t want him to eat a bunch of these.

I was too slow. *facepalm*

Don’t worry. His meltdown lasted about 45 seconds before I handed him a bowl of watermelon to eat. He’ll do anything for melon.

What are your thoughts on protein powder and meal replacement shakes? I always liked the idea, but I had two problems with them…

Enter: Rootz Protein Powder. Rootz is the only paleo-friendly protein powder on the market. All of the ingredients are paleo-friendly, and the only sweetener is some stevia. AND IT DOESN’T MAKE MY STOMACH HURT. (That’s my favorite part.)

Rootz Protein Powder only comes in “Chocolate Banana Nut” which is rather deceiving. As an avid banana hater, I was relieved that it doesn’t taste like banana. Also, there aren’t any nuts in the mixture — just coconut. (Coconut is technically a tree nut, but not usually considered a nut.)

I love whipping up a quick smoothie with Rootz after my BBG workouts. (I’m still doing it — 9 weeks in now. I know, I can’t believe it, either. #cleaneatingcouchpotato)

It gave these brownie bites some added sweetness and some heartiness. If protein powder isn’t your thing, just add more almond flour to replace the protein powder.

2. If you don't want to use protein powder, just omit it and add 1/2 cup more almond flour.

2. You can substitute the honey for erythritol sweetener or more stevia to make these lower carb. 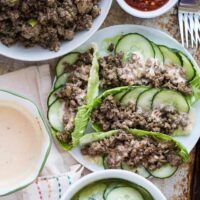 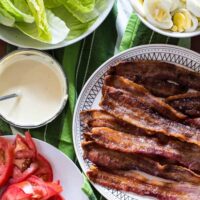 I like the use of stevia, but for those of us trying to stay as sugar free as possible, the chocolate chips will have sugar. ( I have tried carob and just don't care for it)

I use Lily's chocolate chips which are stevia-sweetened.

How many calories are in these?

I don't have the nutritional info configured for this recipe. Sorry!

These sound fabulous, but I'm curious why you include baking soda.

Honestly, I think I left it in there because my cookie dough ball recipe has it. I can taste the difference and it tastes more like cookie dough to me when I include it. I supposed this recipe wouldn't need it since brownies may or may not have baking soda usually. :)