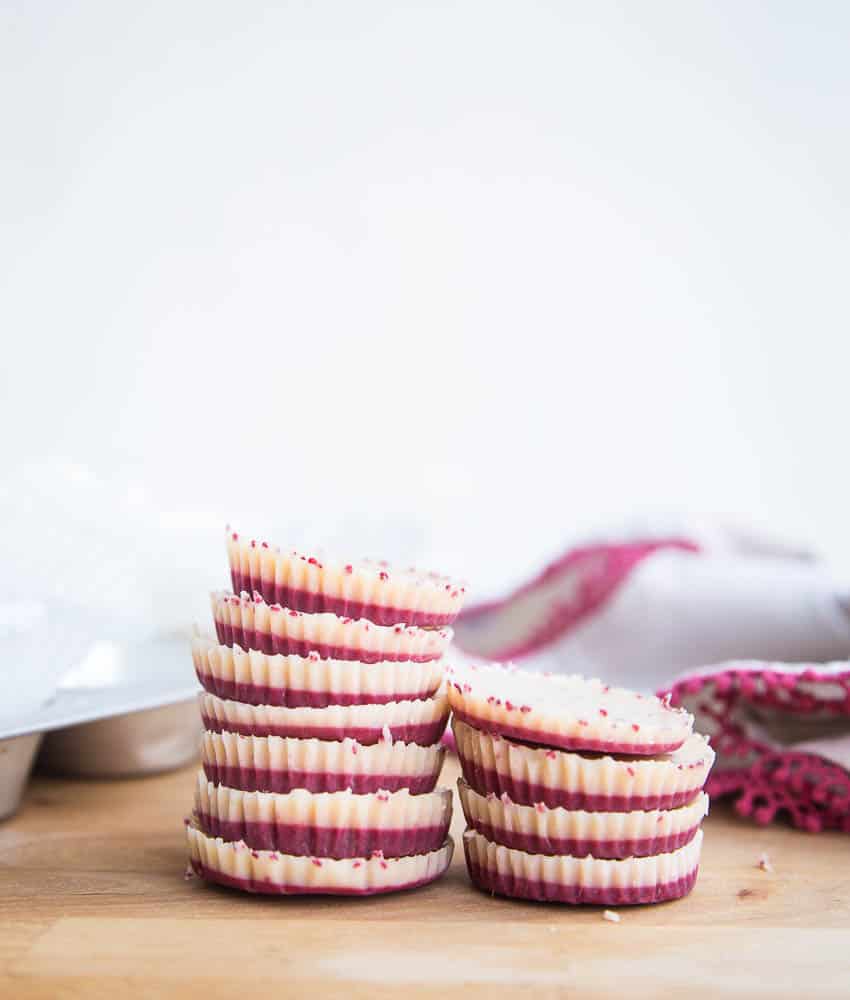 I have a confession: I’ve been leery of fat bombs for a long time.

Don’t know what fat bombs are? They’re little sugar free, keto friendly treats that are mostly made of healthy fats, like coconut oil, and are super popular in the low carb high fat camp. Or those that follow a ketogenic diet. I’m trying to boost the number of keto recipes I have on my site, and these were perfect for my collection!

Also, fat bombs are the perfect thing to soothe a relentless sweet tooth — which I happen to have.

I had a few hesitations before I made these — mostly stemming from my experience with oil pulling. (My hippie-dippie is really showing now.)

What’s oil pulling? Rolling coconut oil around in your mouth for several minutes at a time. It’s supposed to be excellent for your teeth/gum health among other things. I read about it online and in The Coconut Oil Miracle. (Excellent book, by the way!)

I had a hard time with it. And I may have accidentally swallowed some of it on one occasion. *gag* Eating straight coconut oil isn’t my cup of tea, and I wondered if fat bombs would be a similar experience for me.

Nope. Not even close. Eating a fat bomb is closer to eating candy than oil pulling, I’m happy to announce. 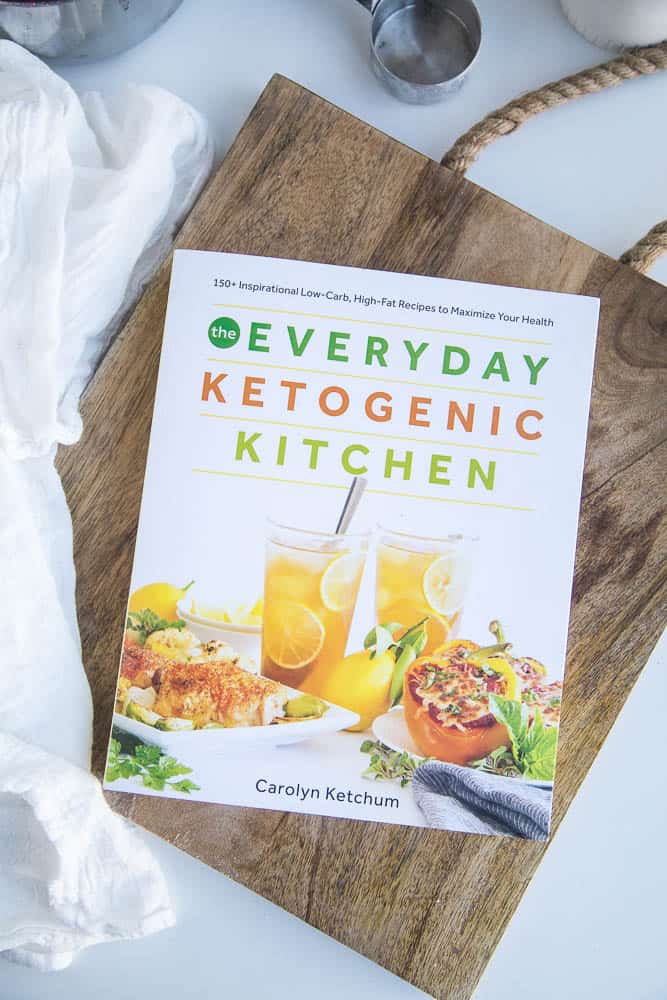 This recipe came from The Everyday Ketogenic Kitchen by Carolyn Ketchum who blogs all kinds of low-carb goodness over at All Day I Dream About Food. If you’re wanting to explore a ketogenic (keto) diet, this book is a must-have.

I’ve been tinkering with keto the past few weeks, and I have some thoughts on it that I’ll share later. Meanwhile…. 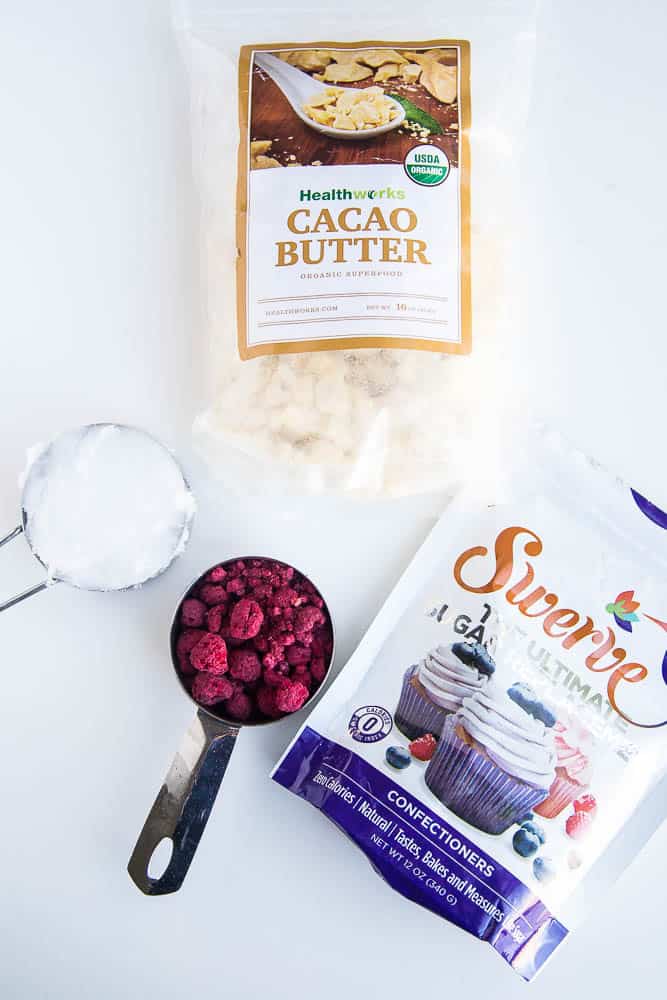 This recipe is easy and simple — only 4 ingredients. But… they might not be ingredients you have on hand all the time.

I did a little math (gasp) and estimated that a batch of these fat bombs costs roughly $6.50, and about 55-65 cents each, depending on how many you make. That’s less than a Reese’s pumpkin. And you’ll feel a lot better after you eat one. Or even if you eat three. (Yep, did that. They’re really that good.) 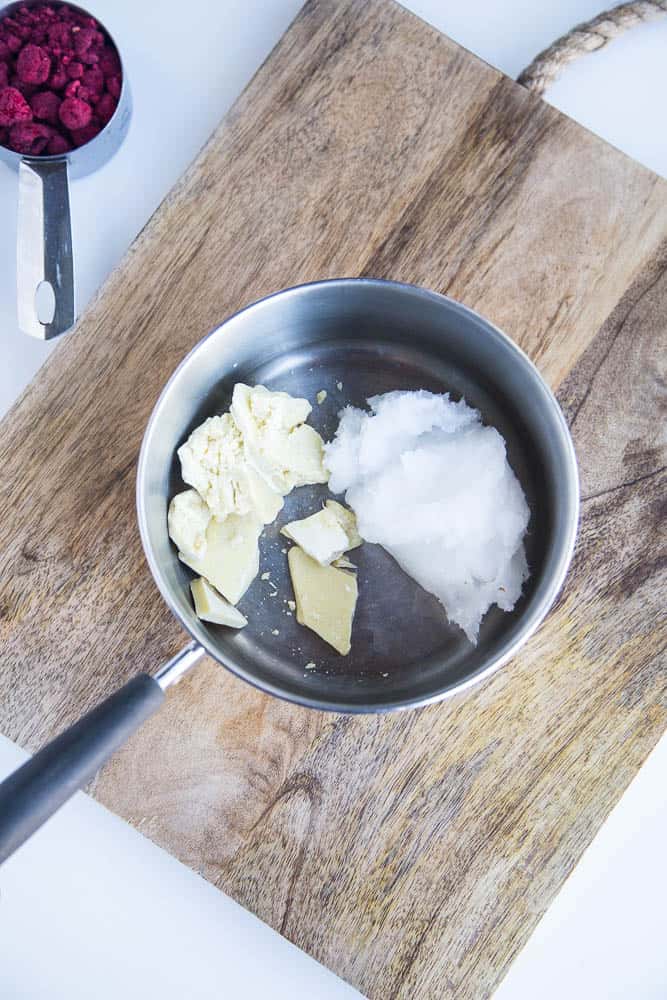 Not like up there where I just threw the big nuggets in as is. 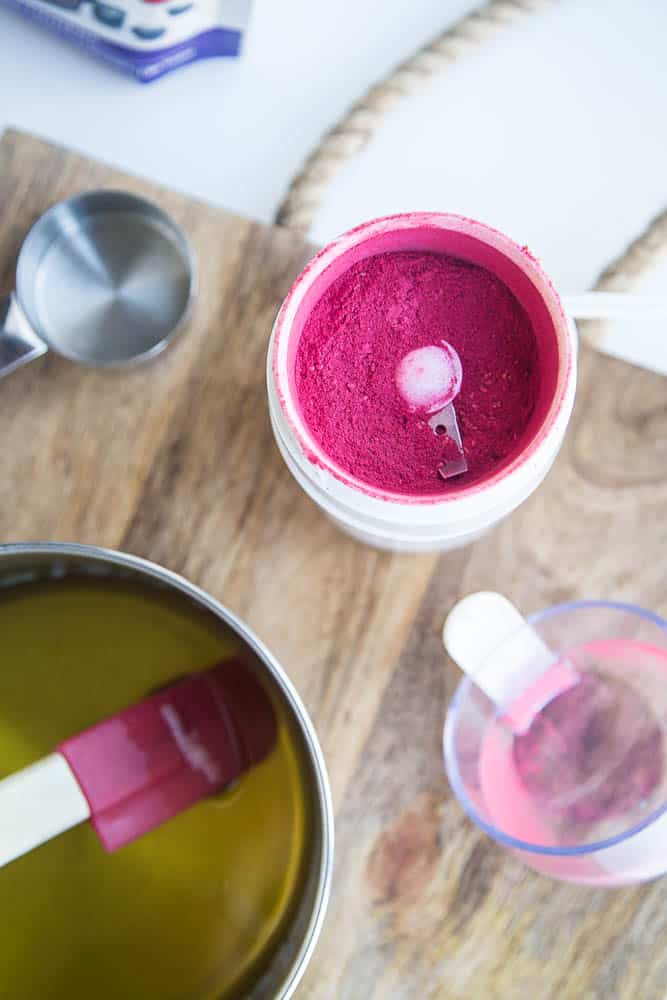 Then, pulverize the freeze-dried berries. You can use a food processor or a blender. I like to use a coffee grinder that I grind spices with, too. I don’t actually use it for coffee.

If you grind coffee beans, it’s recommended that you have a separate grinder for spices or your coffee will have some interesting added flavors.

I also like to strain out the raspberry seeds. Picking them out of my teeth is the worst. But I didn’t do that this time either. Maybe someday I’ll take my own advice. Heh. 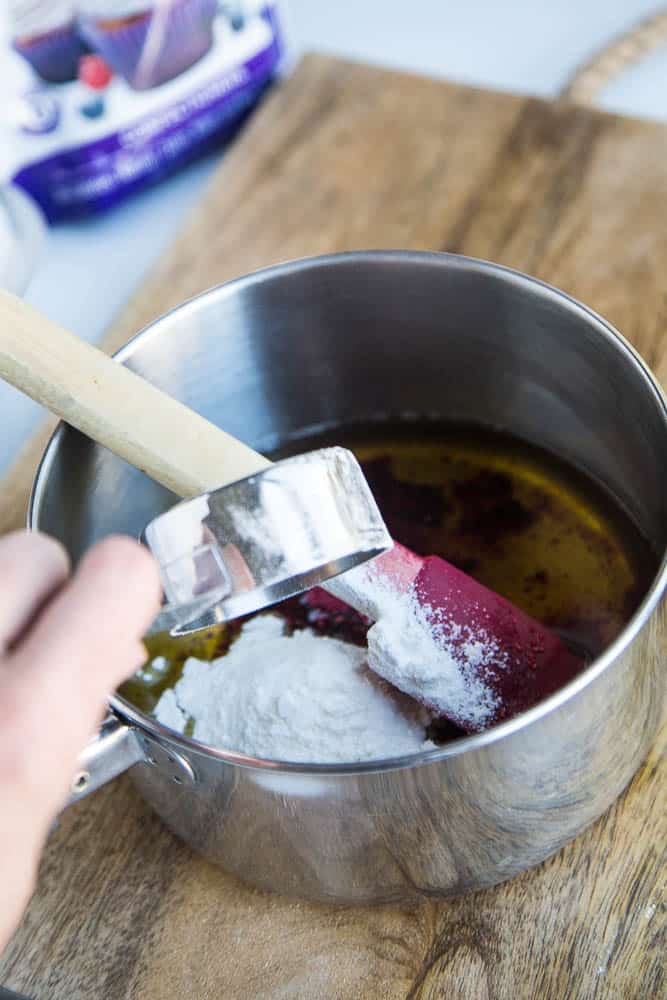 Add the pulverized berries and sweetener to the pot and stir it around until the sweetener has mostly dissolved.

If you use granulated sweetener instead you run the risk of it not dissolving well enough — especially since the liquid is mostly fat. Sugar doesn’t dissolve well in fat. (Ever made homemade sugar scrub?) So use powdered or confectioners sweetener. 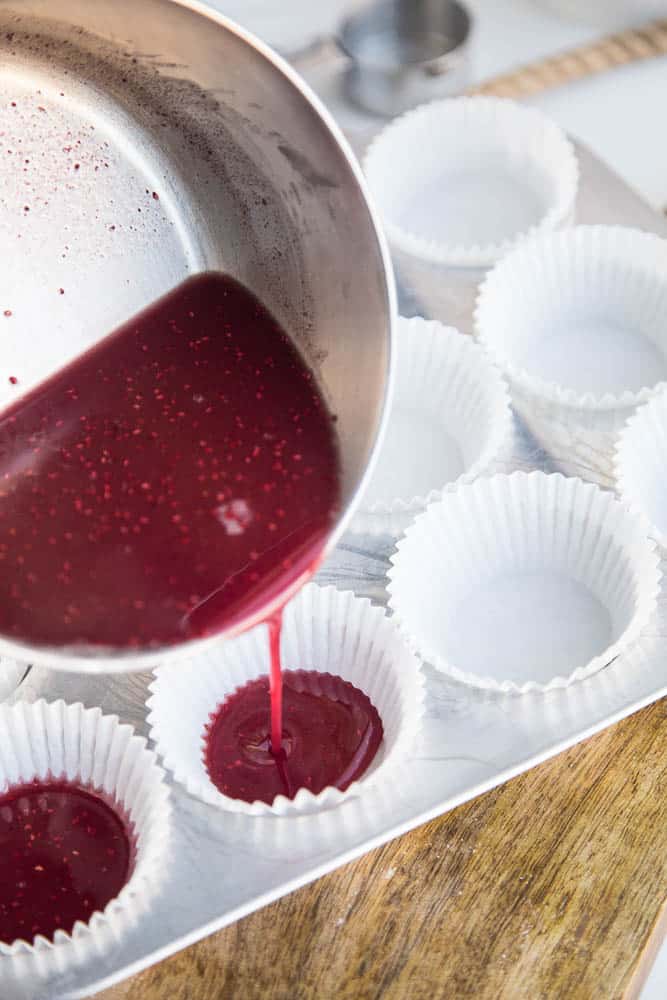 Divide it into silicone or paper-lined muffin tins.

You’ll have to keep this well blended while you’re dividing it into cups because the raspberry mixture (and any remaining sweetener) will sink to the bottom. You don’t want all of the sweetener and raspberry flavor to just end up in the last few cups. 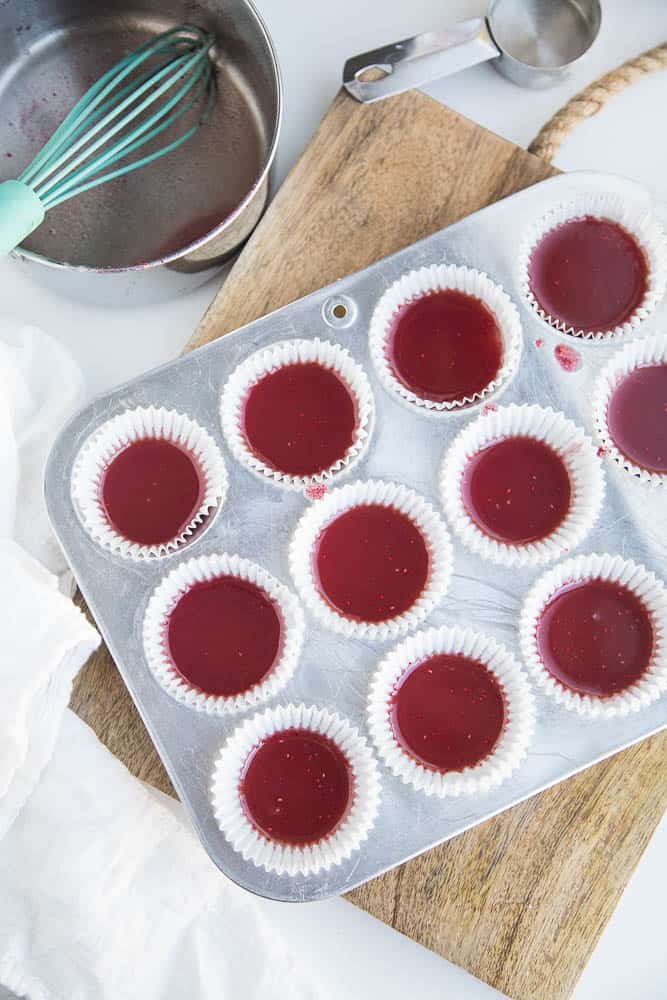 I made 12 fat bombs because I can’t read directions.

And I like it when my muffin tin doesn’t have any vacancies. 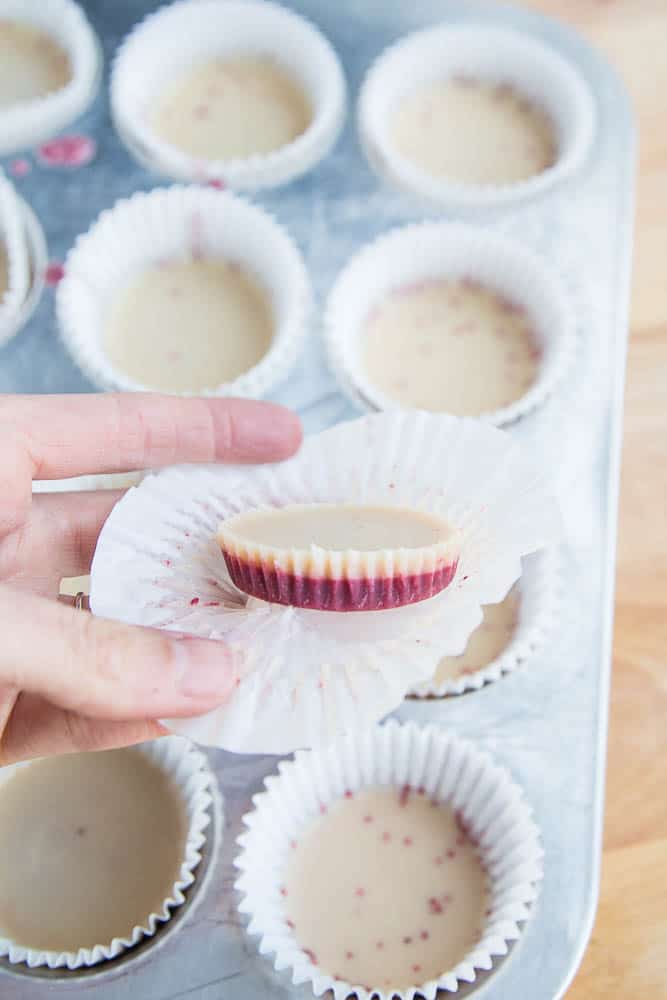 After an hour or so in the fridge they’ll look like this. The raspberry powder will sink to the bottom creating a layered effect. Pretty, right? 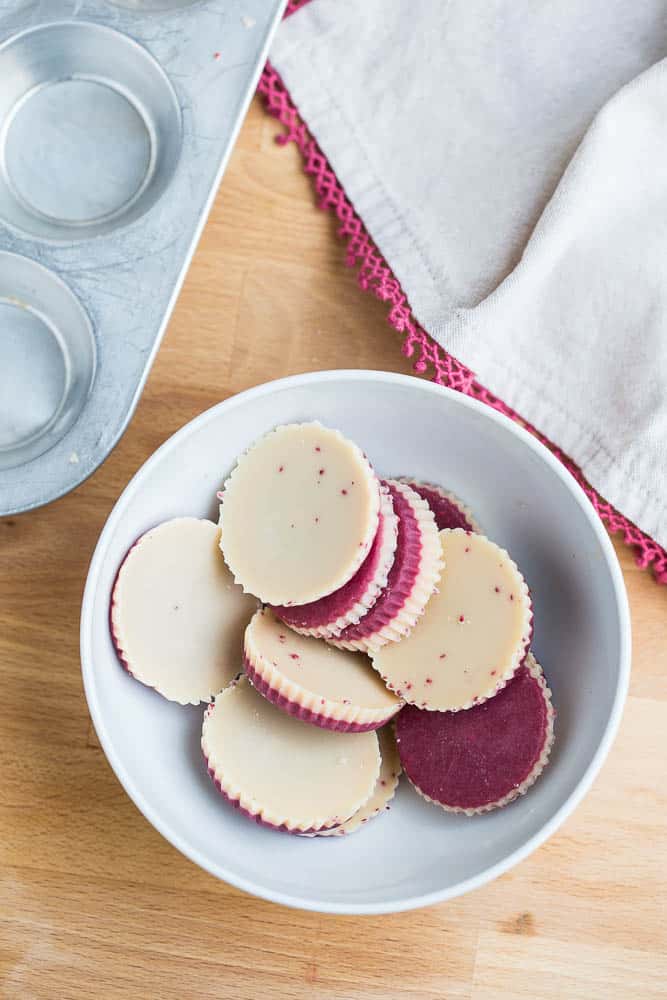 You can store these fat bombs in the fridge and, if you’re feeling generous, let your kids have one. Mine went bonkers for these. My 2-year-old asked for them ALL DAY LONG. And I didn’t mind giving him a few because I knew he was getting some good, healthy fats.

And if you have any friends with relentless sweet tooths (sweet teeth?) who follow a ketogenic diet, I promise they’ll love you forever if you make them a batch of these.

Also, be sure to grab a copy of Carolyn’s book, The Everyday Ketogenic Kitchen! I’ve tried several of her recipes, and we’ve loved every one of them. (Including the other fat bombs — the Salted Macadamia Chocolate. A DE-lish dark chocolate version.)

Nutrition Info for each cup: 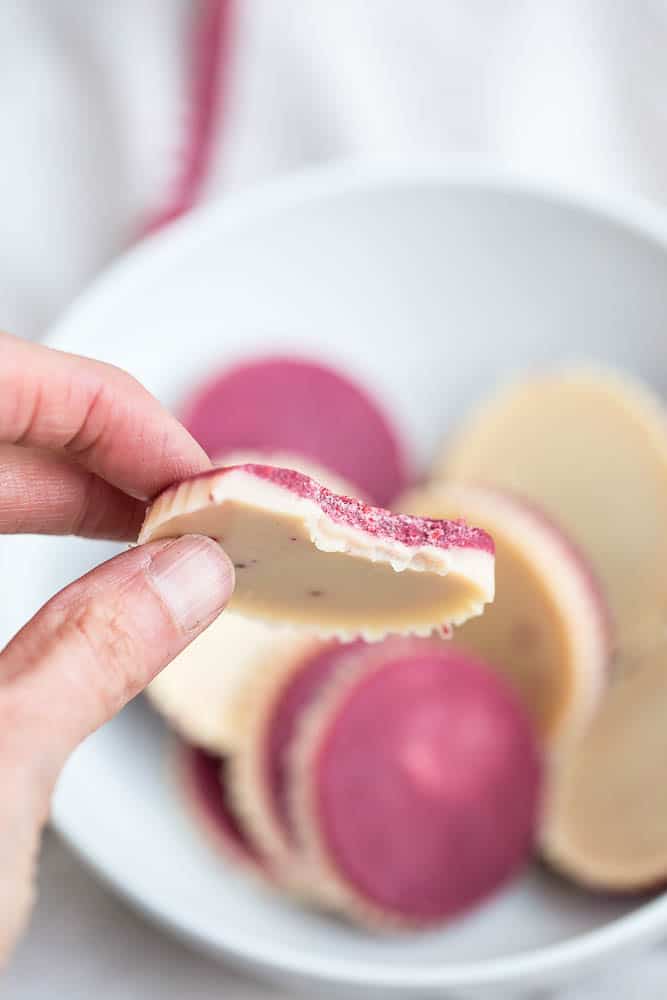 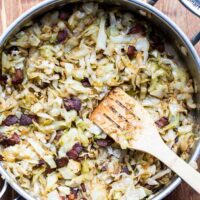 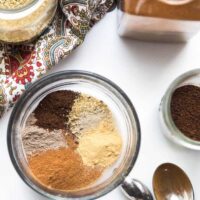 Sorry to hear that! Good to know, though.

This may have been a bad idea to make these!! You are absolutely right they will not last long in the fridge! Thanks you so much!!

I just bought a bag of the dried raspberries already powdered, how much do I use? I can’t wait to make these!

Thank you for responding! I made them for Valentine’s Day so had to make a guess. I made them with 1/4 cup (thinking it might powder down to half the original volume) and they turned out amazing! Thank you for your wonderful recipe! ❤️ ❤️ ❤️

I've never measured the powder before, but if I had to guess, I'd say it's around 1/3 cup if you sift out the seeds.

Hi I was thinking about adding vanilla protein powder, what are your thoughts?

I can't guarantee how it will affect the texture because I've never tried that. I'd love to hear how it goes if you try it!

I'll send you pictures of the finished product tomorrow!