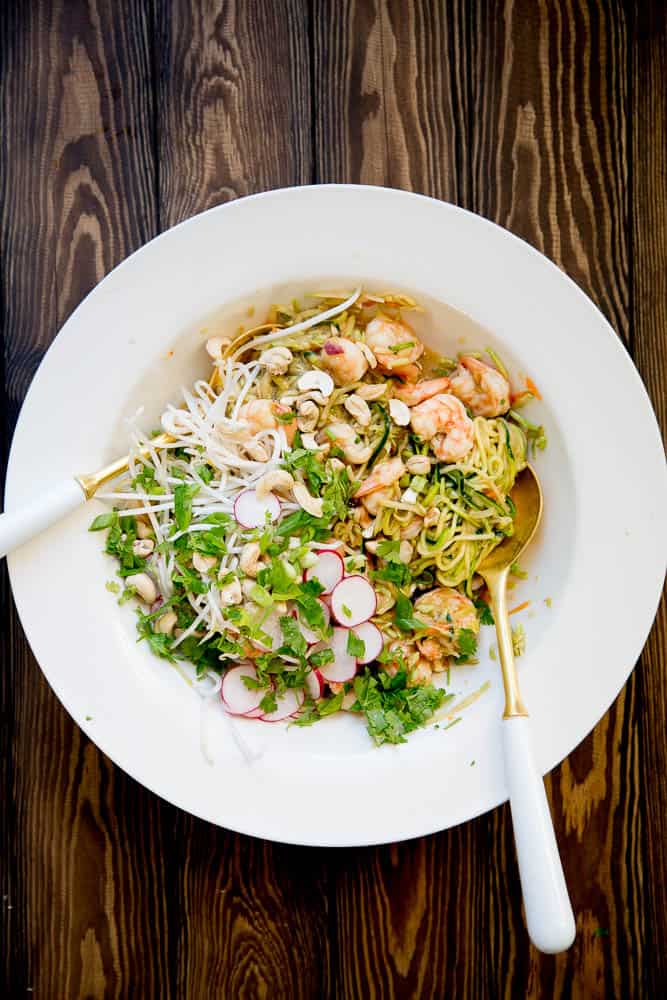 Pad Thai has been on our family’s favorite dinner list for a couple of years now, and the kids always do a happy dance when they find out I’ve made it.

I’ve been meaning to test out a paleo pad Thai on them and just did it recently. Only one of my kids likes zucchini noodles, though. Womp. Womp.

BUT — the kid that likes zucchini noodles said she liked it better than the rice noodle version. So, there’s that. 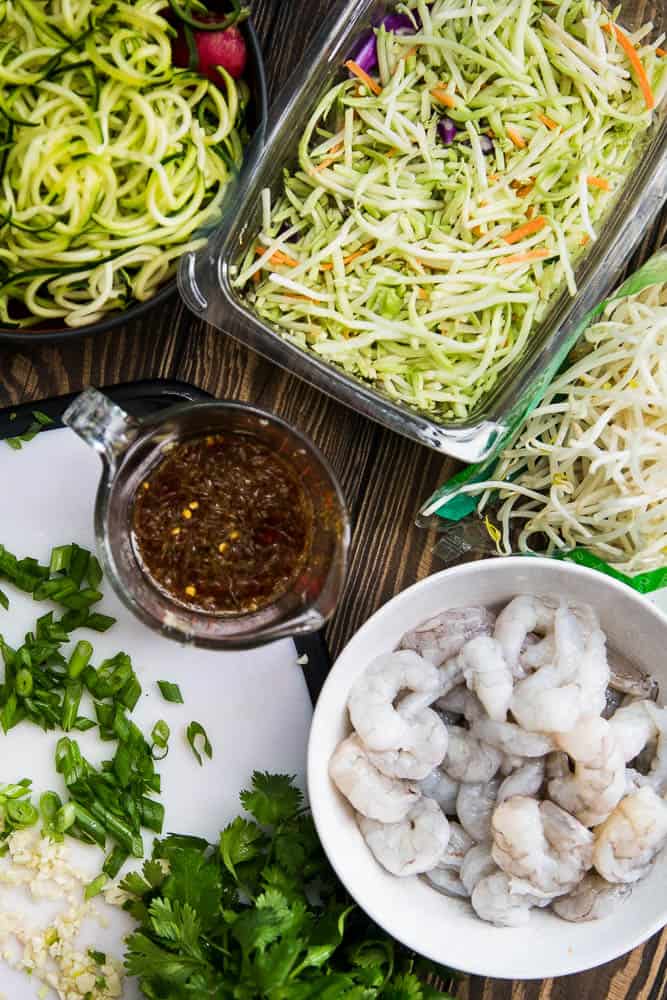 I’m not claiming that this is an authentic pad Thai recipe. (First of all it’s paleo pad Thai, and yes, that’s broccoli slaw up there. I’ll get to that in a minute.) I’m willing to bet Thai food in America (like most ethnic food) is quite different from the version in its country of origin.

Steve got me a Thai cookbook for my birthday one year that supposedly has true, authentic Thai recipes in it. I was excited to try the pad Thai recipe, but it turned out to be the worst pad Thai I’d ever eaten. Oops. I think I might give it another go because my tastes have changed a lot in the last 10 years and even some of the restaurant pad Thai I eat tastes more sweet than I’d like.

As much as I love pad Thai with rice noodles I’ve always felt like this dish could use a veggie boost. I started adding chopped spinach or shredded Brussels sprouts or shredded carrots or whatever I had in the crisper that needed to be used. The kids didn’t mind, so I kept doing it.

Turns out broccoli slaw is pretty tasty in it, too, and doesn’t require any chopping. Score. The nice thing about a paleo pad Thai recipe is that is REALLY vegetable heavy. I love that in a recipe. 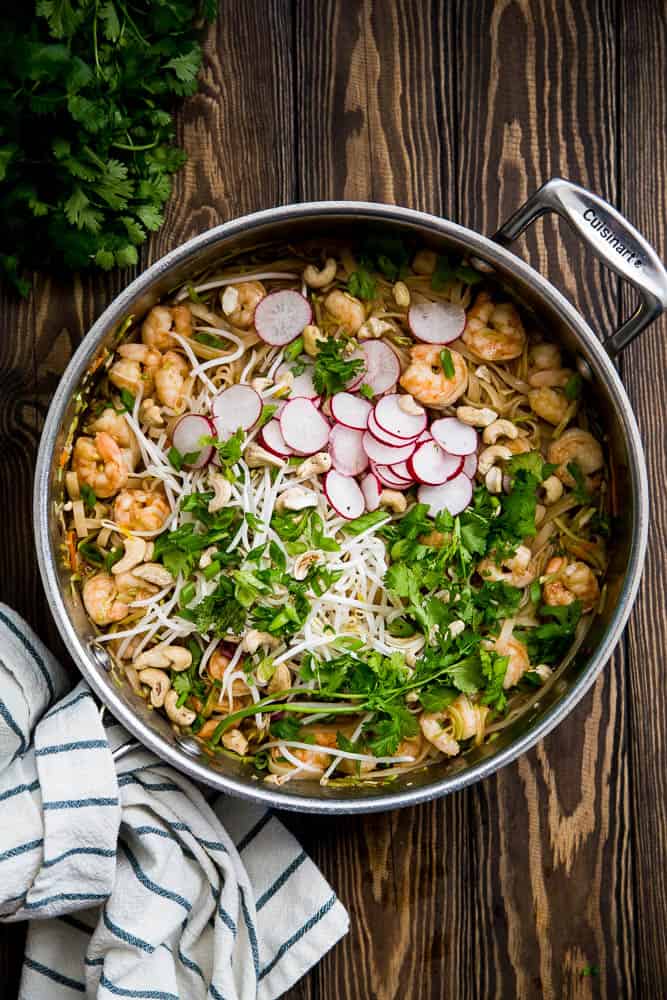 If you love the rice noodle version, I added an adaptation for that in the recipe notes. As well as notes for adapting the Paleo Pad Thai to be Whole30 or low-carb or keto friendly. 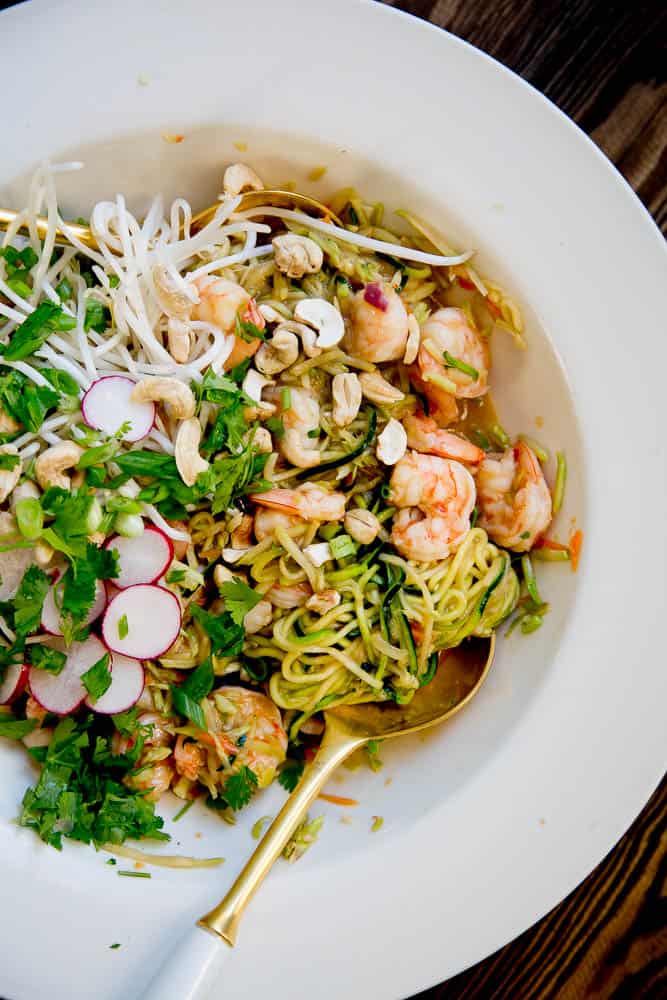 Isn’t this gorgeous? I love all of the colors! Especially the pinks from the shrimp and radishes. (Confession: the only reason I use radishes is to add some hot pink to a plate. The cool crunch is nice, too, I suppose.)

If shrimp isn’t your thing, you could substitute a pound of thinly sliced chicken or omit it entirely for a meatless version.

Thai Green Curry Zoodles with Shrimp & Broccoli is a knock off of one of my favorite meals from Noodles & Co. It’s a great meal for hot summer days, too.

A family favorite, Egg Roll in a Bowl with Sriracha Mayo is easy to put together and has all of the flavors of Chinese egg roll without the fried exterior!

Paleo Thai Shrimp & Vegetable Skillet is very similar to these egg roll bowls — but with a Thai flair.

Mango Chicken Curry is an oldie, but such a great recipe for a quick weeknight dinner.

1. Whole30 adaptation: Make sure your fish sauce and chili paste are sugar-free (Red Boat is the best). Omit the coconut sugar and replace with either 2-3 tablespoons of Date Paste or pineapple juice.

2. Low-carb/Keto adaptation: Replace the coconut sugar with a low-carb sweetener, like erythritol and replace the cashews with a lower carb nut, like peanuts.

3. If you'd like to use rice noodles instead zucchini noodles, omit the tapioca/arrowroot from the recipe and soak an 8-ounce package of flat rice noodles in hot water for about 5-8 minutes before you start cooking the shrimp. They should be limp, but still somewhat gummy when you bite one. Add the soaked rice noodles when you add the broccoli slaw in step 4. If, after you add the rest of the sauce, the sauce gets completely soaked up by the noodles, just add a 1/4 cup of water to make things saucy again. 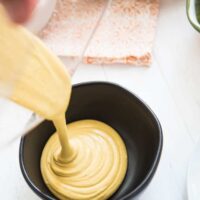 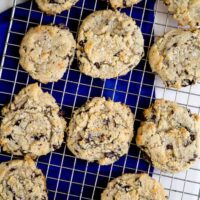 Yum!!! I’ve only tried it with sweet potato noodles. It was delicious but sweet potatoes are so much harder to spitalize than zucchini ?

They are!! I feel like i'm going to break my spiralizer every time I do a sweet potato. I heard that Michelle (Nom Nom Paleo) uses diakon radish noodles in pad thai. I'm totally trying that.

I love pad Thai so I’m always happy to see another version of it that I can eat.

I saw Michelle Tam on Nom Nom paleo make daikon radish noodles. She spiralized then blanched them. I did that and used them in pad Thai and it was amazing. So much better than zucchini noodles, which aren’t my favorite. As a bonus, they look like rice noodles! And my kids ate them better than zoodles. :)