Up until a few years ago I thought making clam chowder would be a pain. I never ate it unless I was in a restaurant. (Mmm. Chowder on both coasts is pretty fabulous.)

When I watched my grandma make it I realized how easy it was to make homemade clam chowder.

I like my grandma’s clam chowder because it isn’t too…. clammy? Fishy? I know that’s the whole point of clam chowder, but I like a hint of clam and not a punch in the face.

I used her recipe as a jumping off point to make a gluten-free version that’s easily made dairy-free!

Clam chowder is basically a creamy potato soup with some clams and clam juice.

Where can you buy clams and clam juice?

Guess what? You can get clams and clam juice at just about any grocery store! You can find them near the tuna and other canned fish/meat.

What type of clams should I use?

Most stores carry minced clams and chopped clams. I prefer the minced clams because I’m not fond of the chewiness of clams.

Does that make me a clam chowder poser? I hope not.

Answer? You can use whichever one you want — either minced or chopped.

There are a lot of ways to make clam chowder! I included instructions for stove top, slow cooker, and Instant Pot in the recipe.

Can I use something other than potatoes in clam chowder?

Sure! If you’re avoiding nightshades or just want something other than white potatoes use small cauliflower florets or chopped turnips for a similar flavor.

Can I use something other than tapioca flour?

This recipe is gluten-free as written, using tapioca flour as the thickener. You can also use cornstarch or arrowroot four in equal amounts.

Can I make this clam chowder dairy-free?

Yep! I use coconut cream (from a can of chilled coconut milk) to create a creamy texture. The dairy-free instructions are located in the recipe notes.

I love cream soups so much. I just want to dive head-first into that bowl.

I topped mine with bacon, but that’s totally optional. (It hurts saying that last part. Bacon should never be optional.)

If you like this recipe, try my Buffalo Ranch Chicken Soup! It is thick and hearty like a chowder and one of my favorite recipes from my Instant Pot cookbook!

FOR INSTANT POT: Follow the first 4 instructions, using the saute mode. After adding the ingredients in step 4, seal your Instant Pot and cook at high pressure for 7 minutes. Let it naturally release steam for 10 min, then pull the steam release to let the rest of the steam out. When it stops bubbling, continue with steps 5 and 6.

FOR SLOW COOKER: Saute bacon in a skillet and set aside. Add the onions and celery and ingredients from step 4 into your 4 or 6 quart slow cooker with 3-4 tablespoons of the bacon drippings. Cover and cook on low for 5-6 hours until the potatoes are tender. While the soup is hot, stir in the cream as it describes in step 6. If it doesn't thicken right away, turn the cooker to high heat and let it cook for another 15 minutes. 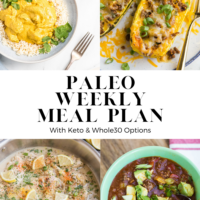 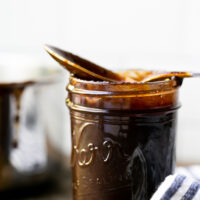 I liked this recipe. I would recommend going a little lighter on the potatoes if you like more of a clammy taste.

I’m not sure what Ryan’s problem is. Sounds like he doesn’t understand how to read the headlines or properly google.

I'm glad you liked it!

Clam chowder by it's very definition has both cream/milk and flour, so your dairy/gluten free abomination is not clam chowder. If you want to cater to the millennial yuppie yabbo it's fun to pretend to be allergic crowd, don't claim this garbage is actual chowder any more than nut juice is milk.

Wow, I bet you're fun at parties.

This is absolutely fantastic! I did half sweet potatoes and half white potatoes, used carrots instead of celery, and arrowroot powder because that's what I had. I will definitely be making this again! It was surprisingly easy!

Good idea! I bet sweet potatoes were lovely in this. I'm glad you liked it!