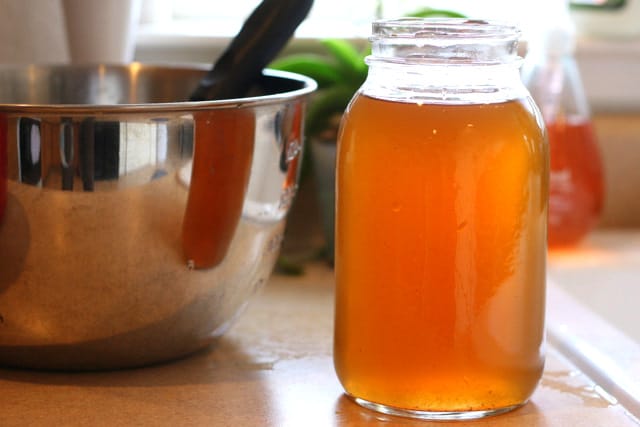 I can’t believe I just barely started making my own vegetable broth. I’ve been making my own Homemade Chicken Broth for over a year now, but I was intimidated by vegetable broth. I thought there had to be a special combination of vegetables or something tricky done to it. (I have irrational hesitations sometimes…) My friend Janssen eased my fears, and I found it was just as easy as chicken broth. No, easier. 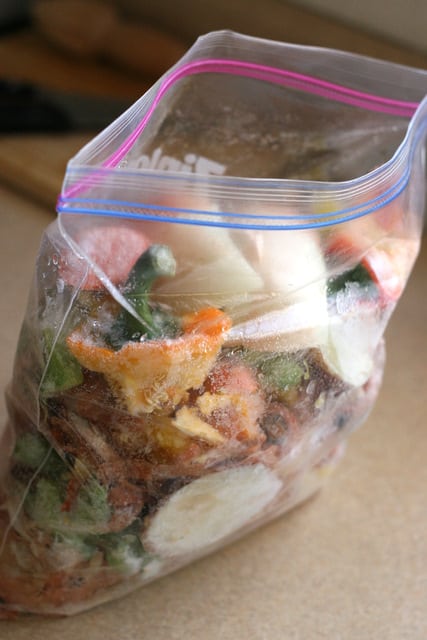 First, get a gallon-sized freezer zip-top bag. As you prep vegetables for cooking, don’t throw the scraps away. Put them in this bag. Make sure they’re clean, though, and if you don’t buy organic vegetables you might want to be pickier about what you save.

See? Pepper tops, carrot ends (and peels), that outside ring of an onion that always gets discarded… stuff like that. Then stick it in the freezer until the next time you’re prepping vegetables. 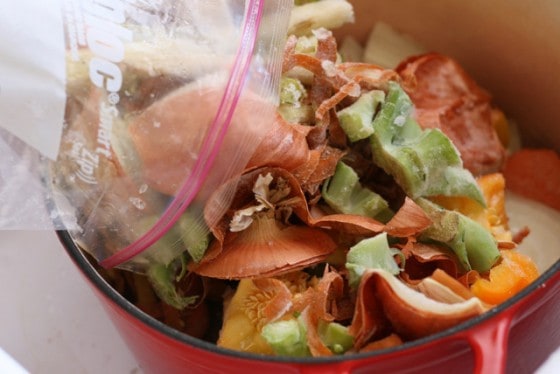 When your bag gets so full you can’t fit anymore in there (hey, I see some broccoli stems, too), empty the bag into a big pot. I used a 7 quart. 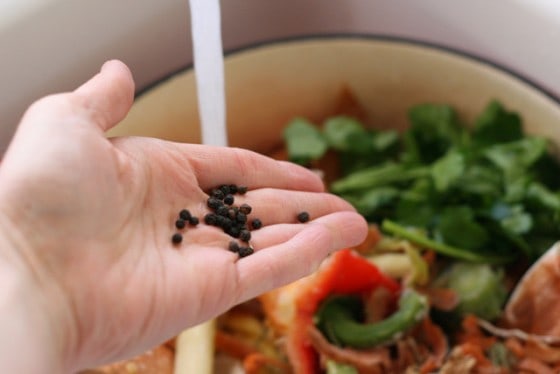 Start filling the pot with water. Add some fresh herbs (if you have them on hand, if not, dried is fine). I like to add some peppercorns for flavor. I don’t add any salt, though, and prefer to control the salt content while I’m using the finished broth. (Same goes for the chicken broth.)

Fill the pot until the water reaches an inch or so from the top. Put it on the stove, bring to a boil, and let it simmer for 3-5 hours. Or longer, if you happen to forget about it. It’s all good. 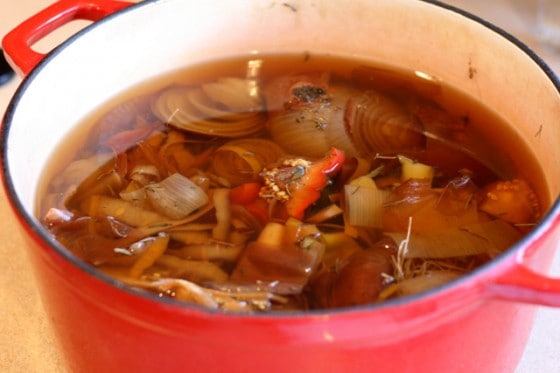 When you get done it should look something like this.

Steve came home and saw this lovely concoction and asked me what I was making.

He’s such a trusting man. He gave me a sideways glance, and didn’t say a word. I’ve got him trained. Don’t worry, it only took me about 45 seconds to tell him what it really was. 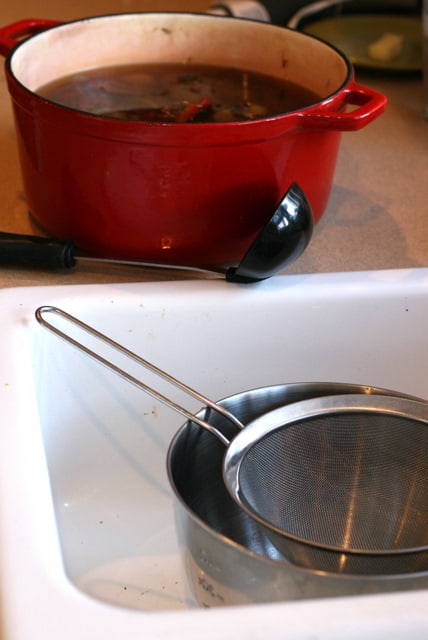 When the broth has cooled some, get out a really big bowl (I used a 4 quart), a fine-mesh sieve, and a ladle. 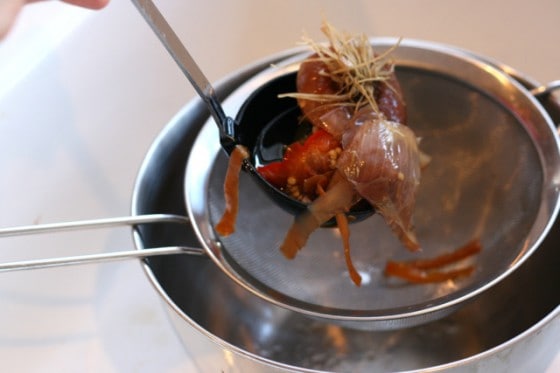 Get all of the larger scraps out of the pot, smash them a bit in the sieve to release more broth. As your sieve fills, just dump it into the garbage disposal or the garbage can. Or if you’re really into getting the most out of this stuff, compost it.

After the large pieces are gone, just dump the rest of the broth through the sieve into the bowl. Let it cool to room temperature, then divide it into pretty mason jars. 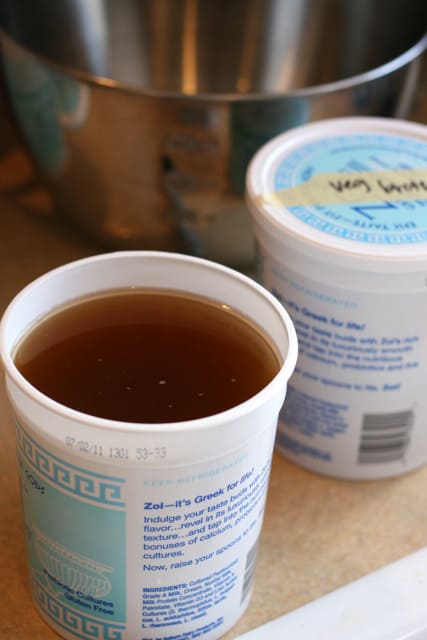 Or (in my much-less-glamorous case) empty quart-sized yogurt containers. You can also use zip top bags (I find they break sometimes and leak so I quit using them).

I use this when I make rice , quinoa or a vegetarian soup without having to use up my precious chicken broth. It saves so much money, and you know exactly what it’s in it (and what’s not in it). I’m definitely a convert. 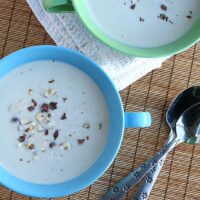 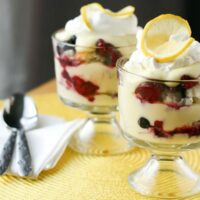 Just found your site and loved this post, I have been making vegetable stock for years this way. As well as the peppercorns. I always add a bay leaf or 2...more if fresh. But I wanted to say, when you mentioned broccoli stems in there...yeah they are good, but I just use the peelings because the stem, under the tough outside skin is tender and sweet! I use them sliced into batons to add to my veggie stirfry along with the usual part of the broccoli head. It is a shame to waste your broccoli stems this way.

Also, I make garlic repellant for my garden plants that attract slugs, snails, caterpillars, deer, etc. Simply slice one or two heads of garlic in half horizontally and throw in a saucepan. Cover with water and boil, covered, until the garlic is soft. Allow to cool and decant the liquid to a jug. Use this “stock” 50% water and 50% stock in a spray bottle and spray your tender plants. Usually you would throw the garlic on the compost but I have found there is still flavour in there, so I add to my stock box of veg for broth making. Chilli ends, ginger peelings, garlic trimmings and lemongrass trimmings is another combo to keep together for Asian inspired broths...I even add spring onion roots if I am not regrowing them.

I keep a few baggies that I put my fresh herb stems in, keeping separate from the veggies so that depending on the veg used, I can add the appropriate stems. When I know I am going to make a lasagna soup, for example, I use a bit of chilli and coriander stems. If I am making tomato soup, and using veggie stock, I add my basil stems, etc. I even save my ginger, used lemon halves and thyme stems together for making a healthy “tea” to sip when I am sick.

If looking what to do with used citrus skins as they are not always great in broths, save them in the freezer like you do with your veg bits, and when you have enough to fill a good sized jar, pour vinegar over them, seal with a tight lid and allow to set for anywhere for 3-6 weeks, longer is fine if you forget them lol. Keep in the cupboard out of direct light. When they have sat for a few weeks and you are ready, decant the vinegar to clean jars or bottles. The city’s peels have released their scent and your vinegar is now ready to be a great smelling all purpose handy dandy natural cleaner! Any vinegar works for this, I tend to use distilled vinegar as it is so inexpensive to buy.

And as I have mentioned fruit and vinegar...save your apple skin and cores in the freezer to even make your apple own vinegar. It is such an easy thing to do and it is so good for you. Ideally organic apples if you are going to ingest the vinegar. The skins absorb the chemicals that if non organic farming practices are used. This is one of my fav vinegars for making dressings as it is so flavourful.

So good to hear! It's such a great way to use scraps.

wow. it's fantastic, i gonna try it in my kitchen, it will be interesting

I make chicken broth all the time, but haven't tried veggie stock. I will now! Here's my tip: pour some of the broth into ice cube trays and freeze. I keep a ziplock bag of chicken broth cubes in my freezer at all times. Usually one cube is about 2 Tbs, it's awesome to pop a couple in a recipe when you don't need much. Double bag and they last for months without getting freezer burn!

So after you put this in containers then you freeze it?

I found your recipe via Pinterest. I have never made veggie stock-- but make chicken/turkey stock all the time, in the crockpot. Just let it go overnight in the crockpot. Then when I get up, I turn the crockpot off and let it cool a bit and pop in the fridge----- then strain and freeze. The flavor is so much better than what I ever could get from the stove top. I'm going to try roasting the bones next time--- and thinking the flavors would be a little more intense roasting the veggies before putting in crockpot. Putting a bag in the freezer tonight with all those odd ball veggies (including the garlic nubs after grating them into meals). Thanks for your recipe.