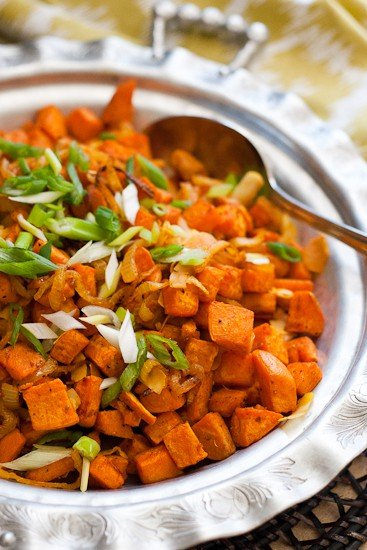 Know what?  I thought I hated sweet potatoes for most of my life because they only place I saw them was on the Thanksgiving table covered in marshmallows.

And that totally grossed me out.

(When you keep the marshmallows far, far away. Just put them in a s’more, mkay?)

One thing that surprised me was how well sweet potatoes play with spicy foods and seasonings. I use them in Tex-mex recipes all the times, and I love the sweet-spicy contrast.

In a Thai-inspired recipe, though? I wasn’t sure. I don’t even know if they eat sweet potatoes in Thailand.

So, the only logical way to know if it worked was to test it out on a bunch of strangers. *snicker*

Last year I catered the dinners for the monthly health classes my husband teaches at work. One month I planned to make Grilled Thai Chicken (along with a Thai Peanut [Almond] sauce that I could drink by the glassful) and needed a side dish. I threw these Thai roasted sweet potatoes together haphazardly and send it to Steve’s office.

They ended up being the most popular thing I made that night!

I had used a Thai spice blend from Spicely, and loved it so much I decided to make my own Homemade Thai Spice Blend. I’d recommend Spicely’s or my recipe because they both contain fenugreek, which is a popular spice in Thailand and has a sweet, maple-y smell that goes FABULOUSLY with sweet potatoes.

And the coconut. And the lime. You can’t leave those out.

Psst… if you’ve got picky eaters, try the super easy Sweet Potatoes and Leeks recipe from Sandi at Fearless Dining!

Nat's Notes:
1. You can also use a combination of sweet potatoes and white potatoes.
2. I recommend using Spicely's Thai blend or making your own (recipe link in the post!) 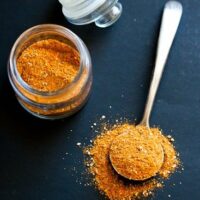 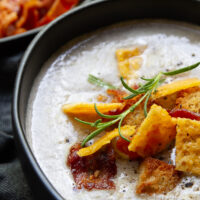