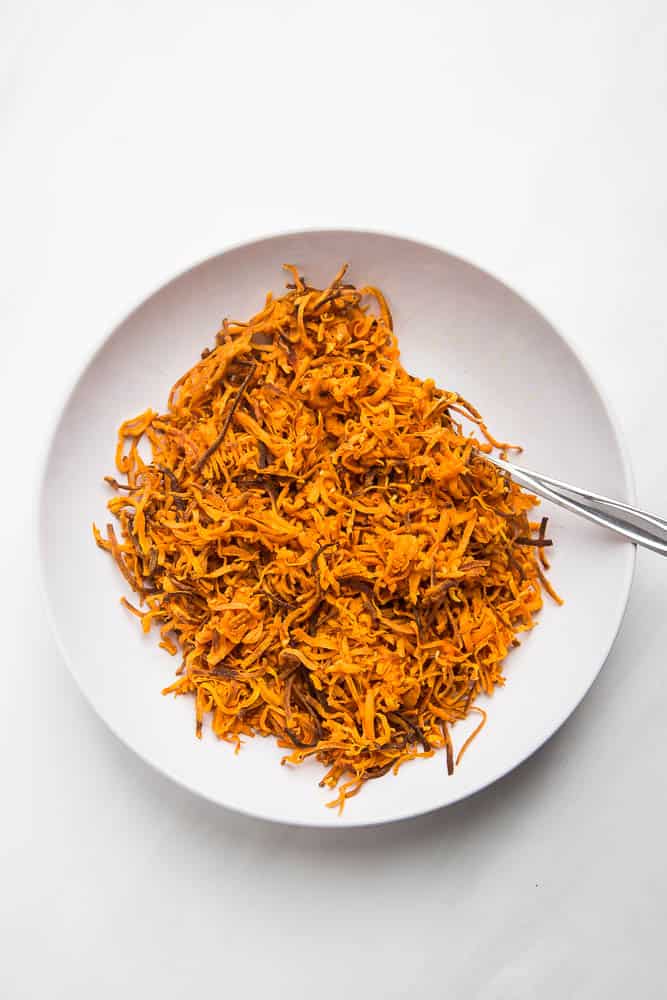 This oven hash brown method is by FAR my most favorite way to make large batches of sweet potato hash browns.

Making sweet potato hash browns in a skillet (cast iron is good!) is definitely an option, too, but it takes a long time to make multiple batches if you’re feeding more people.

And honestly — I could eat a whole skillet full by myself. I love sweet potato hashbrowns a lot.

And sweet potatoes in general — hence the frequency I make sweet potato fries. (It’s a lot.)

There are loads of crispy browned bits throughout these hash browns, and they aren’t soggy at all. Just make sure you have plenty of a special secret ingredient on hand. . . 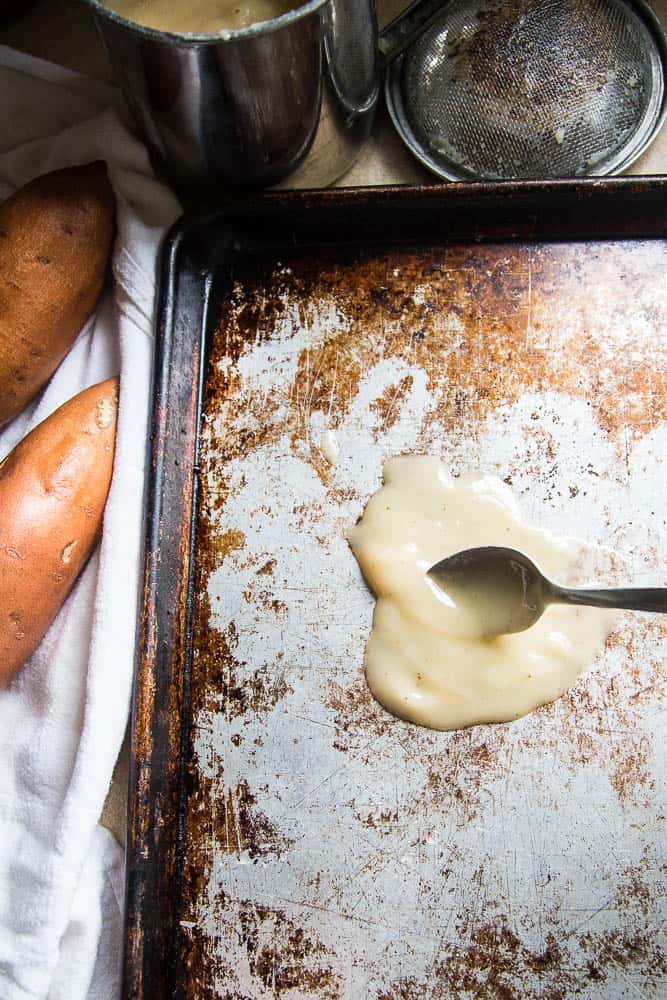 Do I have to use bacon drippings?

Yes, you could use avocado oil or coconut oil, but the flavor you get from bacon drippings is hard to match.

Ghee would give it a nice, buttery flavor and works really well, too. (Psst…. Ghee is really easy to make, too. Have you seen my post on How to Make Ghee?)

Don’t use butter, though, because it will burn.

That’s the nice thing about using ghee — ghee is simply butter with the milk solids removed. The milk solids (or proteins) is what burns under high heat cooking. By using ghee you get the high smoke point temps AND butter flavor. Amazing, no?

How to store bacon drippings

Most of the time I use my grease catcher. But you could store it in a mason jar, too. Just keep adding to it and make sure it gets used so you cycle through all the grease in a few months.

My Southern grandma gave me that grease catcher when we were first married, about 15 years ago. (Grandma Inez, if you happen to have made her Pineapple Pie)

What was I going to do with it if my bacon rendered no fat? I held onto it because I hadn’t had anything like it before (and it reminded me of my grandma since she always has one sitting next to her stove).

Eventually I started cooking real bacon again, and I found it handy for draining bacon drippings. Then I started to cook my eggs and hashes with a dollop of it. And I haven’t looked back.

Also, a little secret from my grandma — put a smear of bacon drippings on your biscuits before you bake them. You’ll thank me later.

If you’re looking for something like mine, this one is identical to the one I have: bacon grease catcher. My only complaint is that the handle broke off the lid, but otherwise it’s been great. 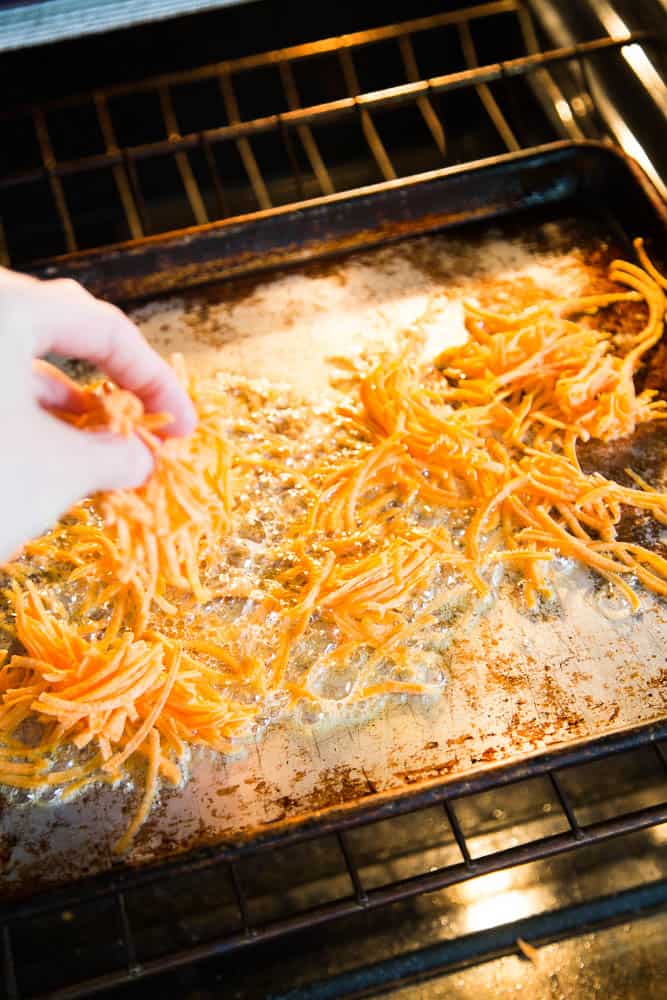 Anyway… I think you’re here for a sweet potato hash browns recipe. Not a guide to buying a great bacon grease catcher.

How to shred sweet potatoes

You could always use a box grater. But there’s a better way.

Now would be an excellent opportunity to convince you to buy a food processor.  (That link is the one I have.)

I use mine for grating just as much as I use it for blending stuff. It comes with slicing and shredding disks and you can shred a huge sweet potato in under 20 seconds.

(And I use it to make mayo. I know — I haven’t jumped on the immersion blender train for that.)

It seems like the biggest chore in the world when I have to pull my box grater out.

Grated sweet potatoes work really well for hash browns. You could cube them really small, but you wouldn’t get the crispness that you get with grated potatoes.

The key to these hash browns is the really hot baking sheet and oil. And making the baking sheet hot BEFORE you put the potatoes on.

You’ll want to preheat the pan with the oil on it, but make sure it doesn’t smoke. Burned oil is no bueno. The oven doesn’t have to be scorching hot. Just medium-high heat — around 400 degrees F. 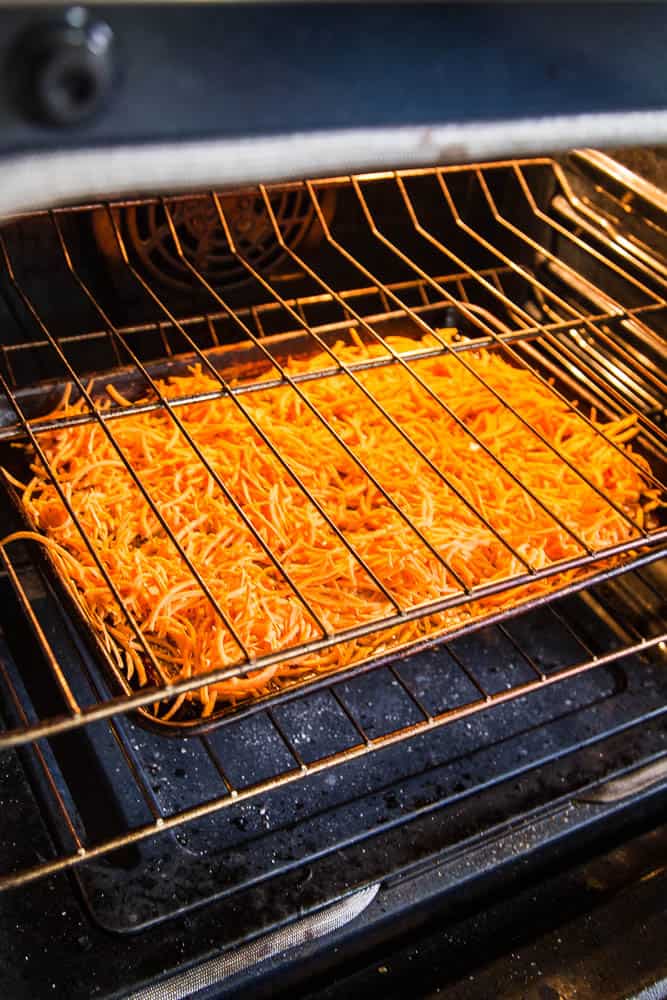 After you spread the sweet potatoes around, roast them for about 15-20 minutes. I flip them around halfway through cooking.

I like to roast these on a lower rack because you get color on the bottom faster. 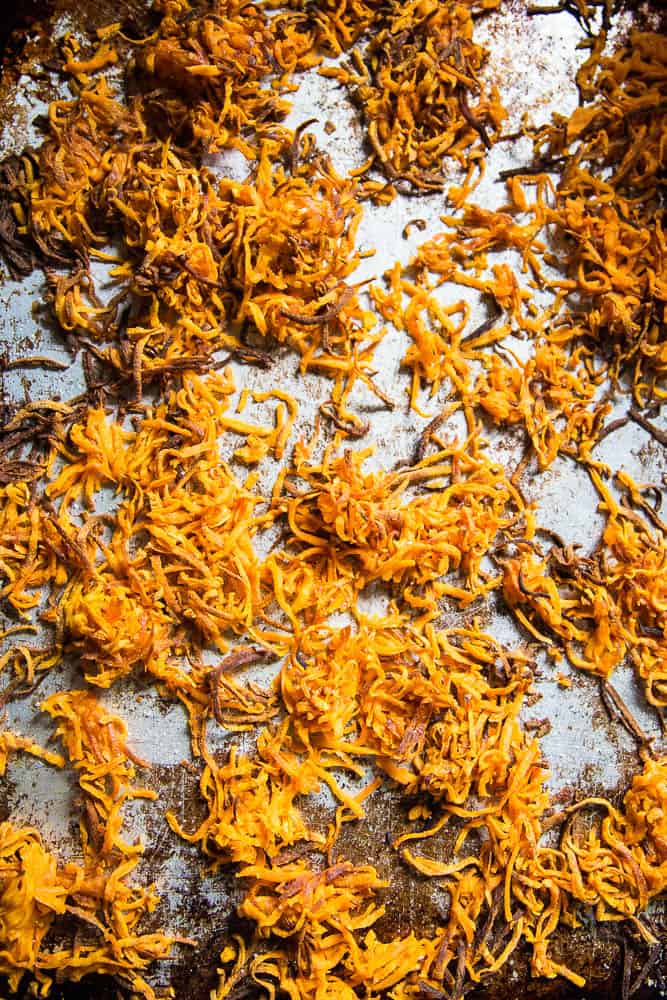 As you’re flipping them around they’ll probably clump up a little, but it’ll all work out fine in the end. Just spread them out as best as you can.

These don’t really need to be transferred to a paper towel to drain because there isn’t a lot of grease left.

I like to season them with salt and pepper after they come out, too. You could add some garlic powder or another seasoning before you roast them.

By the way, you can totally do this in a skillet, but it takes a while if you’re feeding more than a couple of people.

Can you make hash browns this way with white potatoes?

YES. Just roast those a little longer. Sweet potato hash browns tend to get color on them faster than white ones.

You can also use this method for cooking big bags of frozen hash browns. I like the Trader Joe’s ones because they don’t have as many of the preservatives and additives as other brands.

What to eat with sweet potato hash browns

These sweet potato hash browns are REALLY good with fried eggs and leftover Chipotle Copycat Chorizo. Or for another breakfast bowl idea, make a batch of my Homemade Chicken Breakfast Sausage!

Or in some savory Gluten-Free Crepes.

Here are more of our favorite roasted sweet potato recipes!

Sweet Potato Fry Seasoning (and Fries) — This is my FAVORITE seasoning for sweet potato fries and roasted sweet potatoes (and vegetables in general). It would be good on these sweet potato hash browns, too!

Crispy Sweet Potato Chips — Find out the secrets to crispy sweet potato chips, too! I love these with a big bowl of guacamole. Mmm.

Roasted Sweet Potato and Chorizo Lettuce Wraps — These are a quick weeknight gluten free dinner and my kids went nuts for them! (And lettuce wraps are a hard sell sometimes.)

Drop me a comment and let me know if you try these!

I highly recommend using bacon drippings or ghee for these. It adds so much flavor. Avocado or coconut oil would still be good though.
You can use white potatoes, too, but roast them longer. 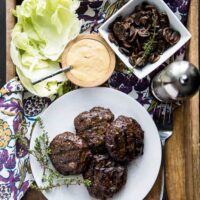 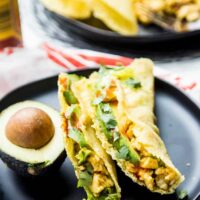 Please tell me about(describe) the bacon grease catcher your grandmother taught you about.

It's a small metal container with a strainer on top. Google "bacon grease catcher" to see what i mean.

Delicious! I'm impressed with the recipe. Thanks for sharing.