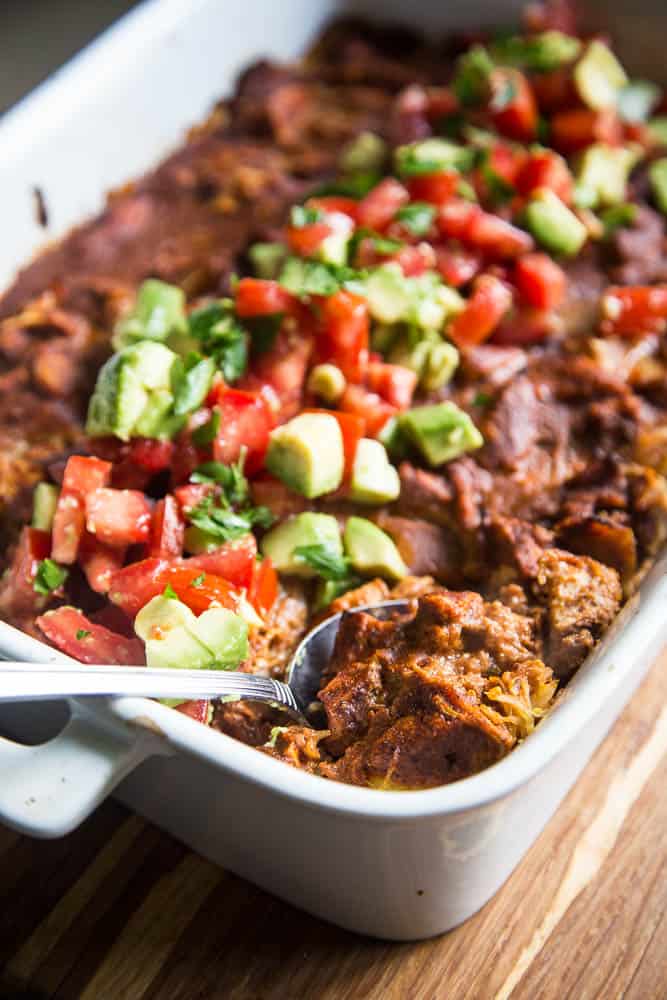 Hey, it’s been a while, hasn’t it? Between moving out of state, the holidays, and setting up Steve’s new chiro office (We’re still not done yet. Ugh.) I’m just about burned to the ground.

I’ve been in a weird place lately — a little restless, somewhat in a SAD funk (Boise, why are your skies so gray?!), and, more recently, recovering from pneumonia. While I was sick I got hopelessly addicted to Cooking Craze and Design Home. I’m not usually a phone game kind of girl, but dang.

So, instead of prepping stuff for Perry’s Plate, I’ve been assembling diner food for cartoon people that walk across my tiny counter. (Seriously, Cooking Craze is fun.) And not Instagramming.

And I’m not even sorry. I needed a break, guys, and I love that you still stick around even when my updates become sporadic. 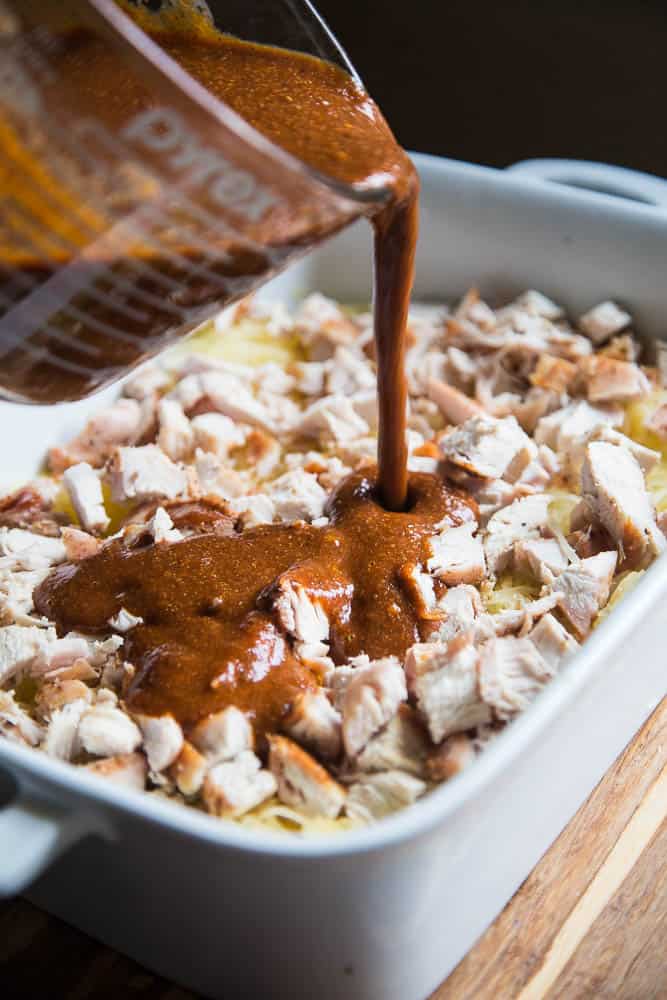 Lately, I’ve been cooking just for the sake of cooking. And making a lot of things out of my cookbooks and from my blog, which makes sense because all of my favorite recipes are in those place.

It’s been really nice not having to worry about testing recipes during the day or using my family as guinea pigs. Or getting photos set up.

By the way, I have an awesome space in our new house with a dedicated prop shelf and space to take photos. You’d think I’d be antsy to get in there and do stuff, but . . . nope. My mojo will return. I just need to give her some space.

Two months is far too long to go without posting a recipe, though. This spaghetti squash bake might look familiar to some of you. It was an exclusive recipe in my newsletter a couple years ago, and I decided that I wanted it to have a home here on my site because it’s so dang good. 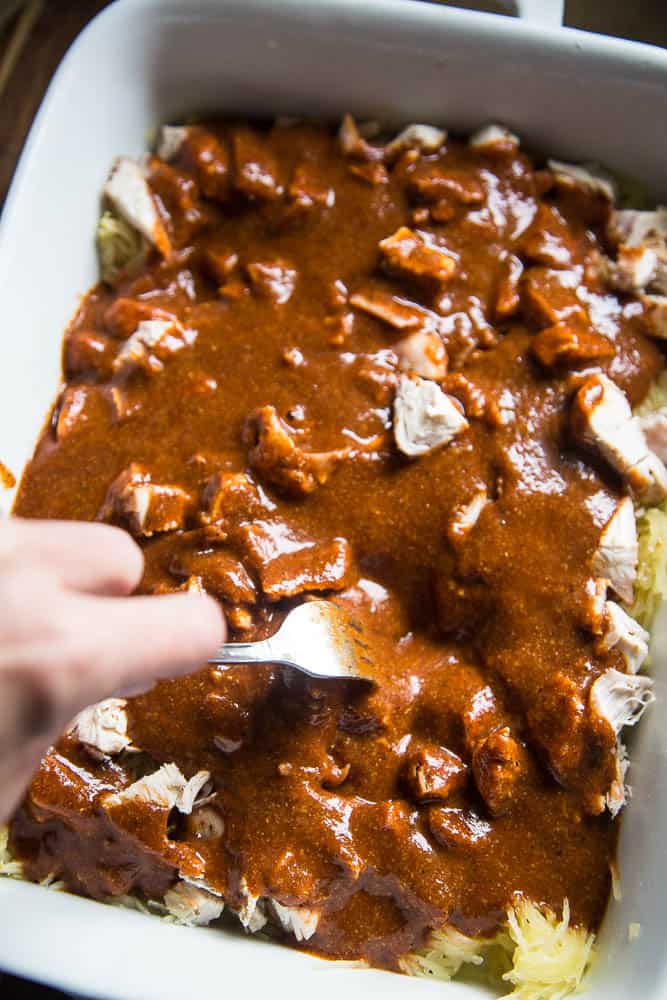 Have you tried my Whole30 Enchilada Sauce recipe? It’s the star of the show here. And this bake is Whole30 compliant!

If you’re low-carb/keto and are eating dairy. . . . I highly recommend a few handfuls of shredded pepper jack cheese on this. If not, then cheese-less is still super tasty. And you’ll need to use a low-carb sweetener in the enchilada sauce. 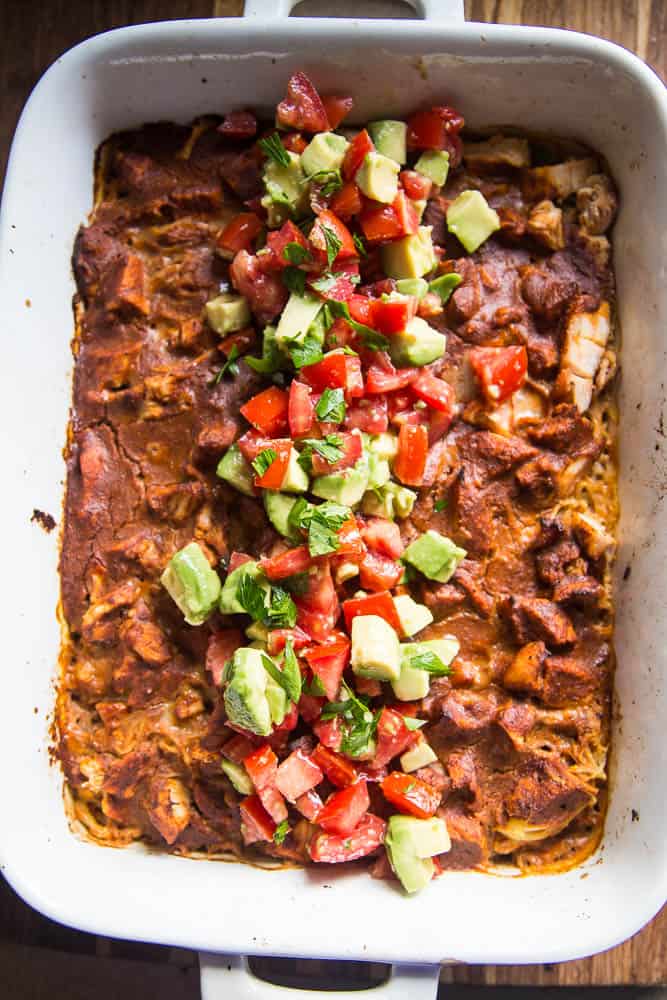 It’s also easy to whisk together really quickly. Just let it simmer while you roast the chicken and squash and It’ll be ready when it’s time to assemble the spaghetti squash bake.

There are a lot of make-ahead options here. You could prep the sauce, chicken, and squash, and then assemble them a day or two later. You could also assemble the whole thing and bake it later.

That tomato-avocado salsa stuff on top? That needs to be there. Truly. Or some kind of salsa or pico de gallo that you like. Mango salsa would be good here, too. It’s such a nice, fresh addition to the warm, spicy bake.

Have you checked out the other spaghetti squash recipes on my site? 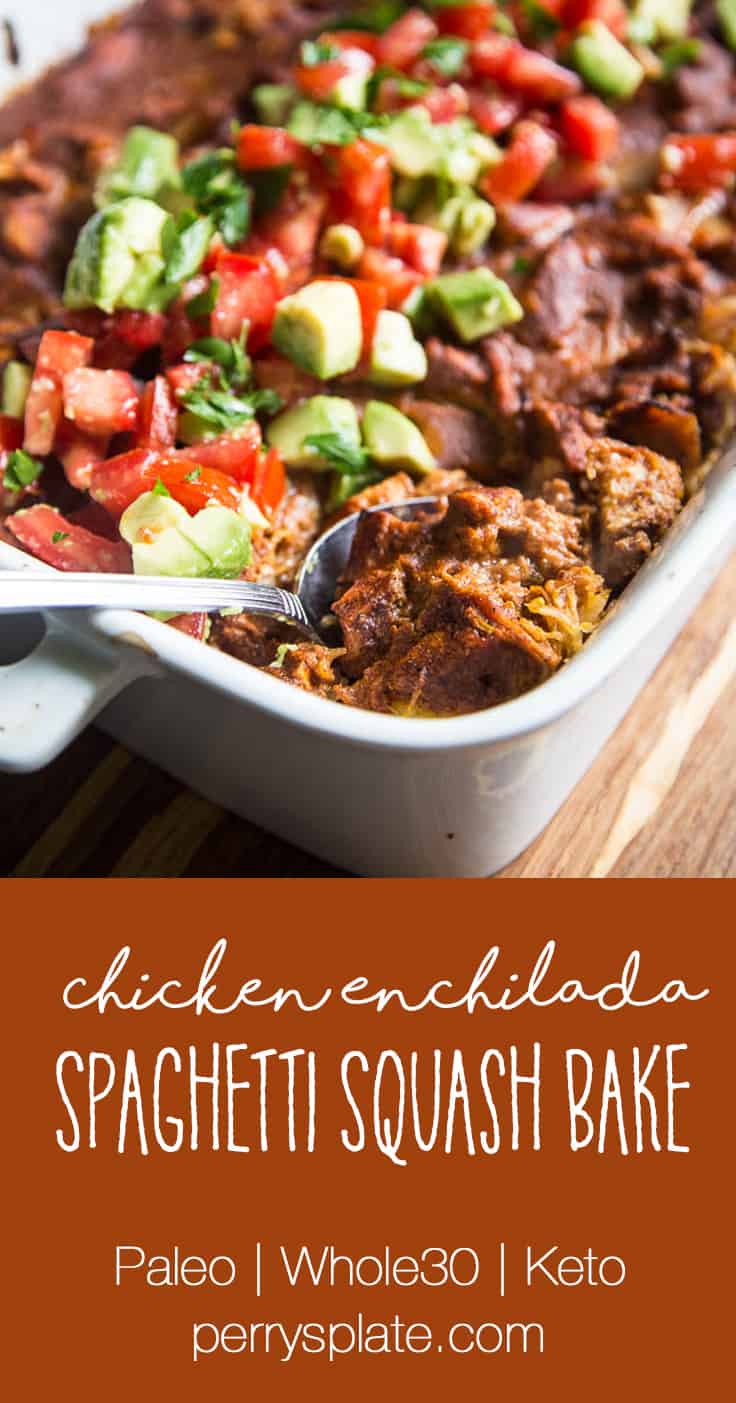 Disclosure: This post contains an Amazon affiliate link. Purchases made by using these links don’t cost you any extra and helps to keep my content free. 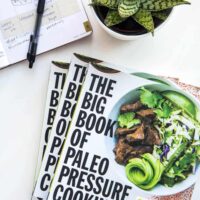 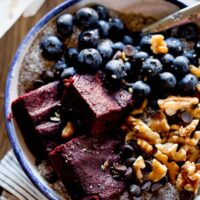 I have not made this recipe yet but I am perplexed by the instructions for baking. I agree that the squash needs 40" but boneless skinless chicken at this high heat would be able leather after 40" . I bake these at375 for about 15 to20" depending on the thickness. Just wondering if this was a n error?

It totally depends on how thick the chicken breasts are. I get the organic ones from Costco and often they're about 2-inches thick! Just keep an eye on the chicken and pull it out when you think they're cooked through and keep the squash in there for longer.

I know all about funks. Love you and glad to see you posting!

Hugs! Feel better!!!!!! Holy cow pneumonia . I’m 39 weeks pregnant and just can’t seem to get anything done for my tiny blog. ?Which is a bummer bc my Pinterest views are high so I know I should but I can’t either. This looks amazing!!!!!!! I love homemade enchilada sauce.