Making coconut rice in an Instant Pot is even better.

I’m not sure I’ll be able to make any kind of Thai curries with plain rice from now on.

Do you have an Instant Pot yet? It’s so fun hearing about people getting them for the first time! The excitement, the initial trepidation, then gingerly trying out a first recipe, and then the relief when their kitchen doesn’t actually explode.

And then after a while when they get comfortable they wonder how they ever survived without one.

I have two Instant Pots (I bought a second when I was working on my Instant Pot cookbook and it made sense to have two).

They’re both 6 quarts and I LOVE having two. Sometimes I have both of them going. Sometimes I grab the insert pot from the second one if the first one is storing something and I don’t feel like washing it out.

It works out nicely.

When someone gets an Instant Pot or another kind of electric pressure cooker and asks me which Instant Pot recipes they should try first, I usually tell them to start with a simple recipe, like rice. It’s an easy recipe and you can’t really mess it up.

While I don’t recommend getting an Instant Pot JUST for making rice, it does its’ rice cooker job quite nicely.

You can either use the rice function or if you want to shave a few minutes off the cooking time, use the manual setting for 8 minutes at high pressure and let it sit for 4-5 minutes at natural release before releasing the steam valve.

Ok, about this Instant Pot coconut rice recipe. Depending on the coconut milk you use and the temperature of your kitchen, your coconut milk may have separated with hardened cream sloshing out of the can.

This is totally fine. Just stir it around a bit and a high pressure Instant Pot cycle will take care of the rest.

What kind of rice is best for coconut rice?

We usually buy jasmine or basmati rice. Those fragrant rices are super tasty. You could definitely use regular long-grain white rice for this. If you use brown rice, that’s fine, too, just know the coconut flavor won’t be as strong.

You can use short grain or long grain rice. Short grain has a higher starch content and will be a bit more sticky. Rinsing the rice 2-3 times before cooking will take care of some of the starch and you’ll end up wit more fluffy rice.

What kind of coconut milk is best?

Another note — I add a little sweetener to my coconut rice, just to give it a little hint of sweet. But, this is totally optional.

What if I get a burn notice?

If your coconut milk is really thick, you might want to swap out some of the coconut milk for a cup of water or coconut water. Some Instant Pot models are more sensitive to burn notices.

Can I make this on the stove top?

Sure! I included instructions for this in the recipe card.

You’ll have to stir it well when it gets done, and it’ll be a little stickier than regular steamed rice, but that flavor is AMAZING. Adding some toasted coconut flakes would add even more coconut flavor and texture!

It stores well in an airtight container for later and is a perfect side dish for any kind of Indian/Thai curry dishes, Asian dishes, and Hawaiian/Polynesian recipes. That first photo up there shows it with a Quick Thai Fish Curry!

What to Serve with Coconut Rice

These recipes would also be great with this coconut rice!

Mango Chicken Curry — An oldie from Perry’s Plate (and in desperate need of an update!), but still such a great recipe. Mango + coconut is a stellar combo.

Easy Thai Chicken Curry for Instant Pot — Another reason to get a second Instant Pot. Heh.

Paleo Thai Grilled Chicken with “Peanut” Sauce — Yes. Just do this. That peanut sauce with this coconut rice?! I may have to throw that on my menu next week.

Stovetop adaptation: Add the rice, coconut milk, 1 cup of water, sea salt, and sweetener in a large saucepan. Bring to a boil. Reduce to low heat, cover, and let it simmer for 15 minutes. Remove from heat and let it sit, covered for 10 minutes. Fluff the rice with a fork and serve immediately. 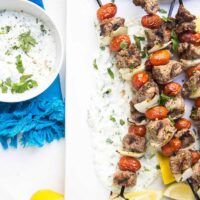 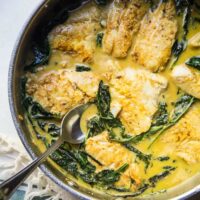 Hi Natalie To cut the recipe in half for the coconut rice , do you cook it for the same amount of time ? Thanks , Sue

Just use water for the remainder of the liquid. It won't have as much coconut flavor, but it'll still be tasty.