There’s a fun restaurant chain out here in the Western US called Cafe Zupa’s that serves fresh & tasty soups, salads, and sandwiches.

They have a Chipotle Chicken Salad that I love with a spicy honey cilantro glaze drizzled on top.

Drizzling a honey glaze over a salad seems unnatural. I agree.

In fact, the first couple of times I opted out of the honey drizzle because I was turned off by it.

And then I got the honey cilantro glaze on the side out of curiosity. I’m glad I did. Just a little of that honey glaze gave the salad a whole other dimension as it mingled with the chipotle ranch dressing and grilled chicken.

I had to make some for myself.

After hacking this honey glaze, I’m convinced the restaurant version is mostly corn syrup or some other sweetener.

My version has a stronger honey flavor because it’s mostly honey.

Funny how that works.

It’s just a few ingredients (most you probably already have!) and a minute or two in a hot skillet.

I love the fresh cilantro in this because it gives it boost of freshness to balance out the sweetness.

If you’re anti-cilantro, I’m sad for you.

But I understand. And you can also use fresh parsley if you like. Or sliced green onions.

It might seem a little watery, but it’ll thicken a little as it cools.

And you’ll want it to be on the thin side because if it isn’t, it’ll thicken up so much in the fridge it’ll be impossible to drizzle.

How spicy is it?

I know I’ll get this question.

The answer is — depends on how you use it.

It’s not as potent and spicy as hot sauce.

But it does have a good kick to it. If you eat it in a cool, crispy salad with a lot of other things going on, it won’t be too overwhelming.

If you immerse your popcorn chicken in it, expect to feel that kick.

If you’re sitting there thinking “what on earth would I use this for?” — I’ve got your back. Here are some suggestions. 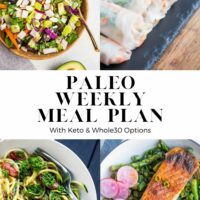 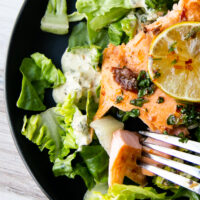