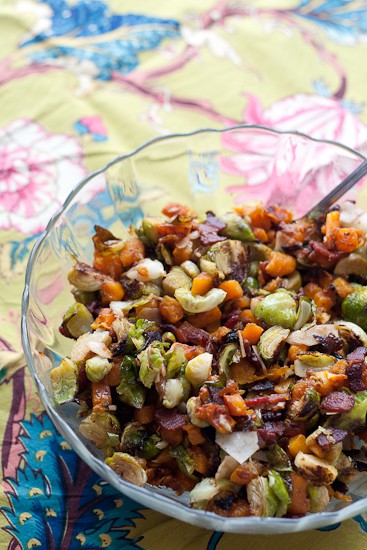 I’m pushing that other giveaway back a few days to give you an actual recipe — something you could use as a side dish at a holiday dinner!

I love how the slightly bitter sprouts play off the sweetness from the squash and balsamic. Also the salty bacon and cheese. Seriously… recipes that have all those components make me so happy.

This won’t be on our table this year, though. We’ve (accidentally) started this tradition to eat battered fish tacos for Christmas dinner.

It started in 2008. I had a 4-week-old baby and at the time I was part of the Daring Baker community. My post-partum self was determined to finish that month’s challenge to eat for Christmas dinner. (Me=nuts.)

The challenge? A French Yule Log. Hands down the most time-consuming dessert I’ve ever made. The recipe is an 18-page Word document. (For reals.) Some layers were easier than others, but every layer seemed to dirty every dish in my kitchen. I finished it though! And we ate every bit.

But by Christmas Day I was exhausted. After the presents were opened and our 19-month-old had sufficiently trashed our little apartment it was time to start thinking about Christmas dinner. The thing was… I was so consumed by finishing that blasted  Yule Log, I hadn’t really planned on anything fancy or traditional. I happened to have the stuff to make battered fish tacos that I was meaning to try and Steve was cool with having fish tacos for dinner. So, fish tacos it was.

I still remember the conversation I had with my grandma that morning. She probably thought I was insane for not cooking a turkey. Maybe I was, but dang. Those tacos were good.

We like it so much we decided to make those every Christmas, if we happened to be staying home for the holiday. We’ve added other things to the meal over the years, like tamales or enchiladas, but those battered fish tacos stay on the menu. And because I rarely deep fry anything, it’s the only time I make them all year which makes them special.

This year we’re having another family over, and I warned them ahead of time that we’d be having Mexican. They were super excited. That made me happy, and I felt a bit more sane.

Do you have any special Christmas dinner traditions? If you go traditional, this recipe will rock your table. 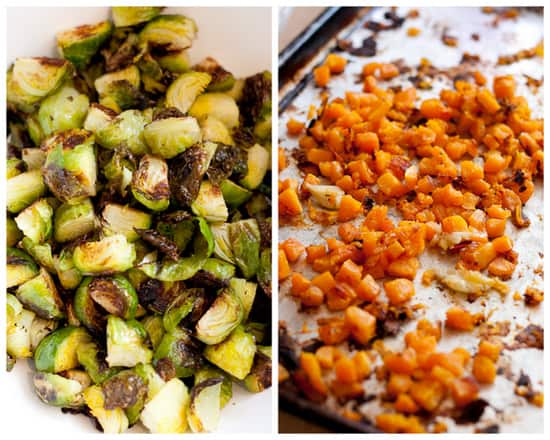 After I made it I realized I picked the two most tedious vegetables to prep and put them together. Luckily I had leftover butternut squash cut up from a previous night so it wasn’t too bad. You could prep both ahead of time and save yourself a lot of chopping! 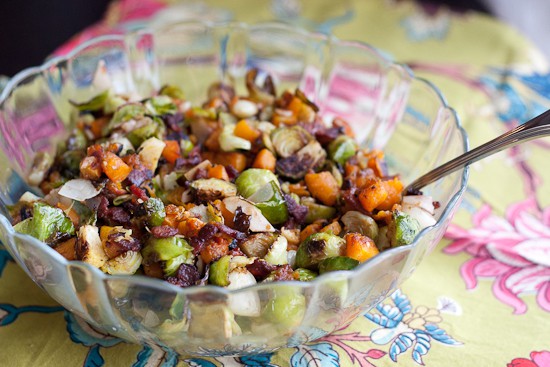 By the way, if you’re a fan of Brussels sprouts, you MUST try my Crispy Roasted Shredded Brussels Sprouts. Seriously. They’re the best Brussels sprout recipe you’ll ever make.

Place sprouts on one rimmed baking sheet. Place the squash on the other. Place three cloves of garlic on each pan and divide the oil between the two pans. Using your hands, toss the vegetables in the oil until combined and spread them evenly in the pan. Sprinkle with generous pinches of salt and pepper. Roast the pans in the oven, rotating and stirring the vegetables in the pans after 15 minutes or so. The sprouts will be done after 20-25 minutes and should have dark golden spots. The squash should be done shortly after. Transfer vegetables to a baking dish.

While the vegetables roast, cut the bacon into small bits and cook in a pan over medium heat until crisp. Remove with a slotted spoon. Add bacon, balsamic vinegar, and most of the cheese (if using) to the vegetables and toss to combine. Taste, and add salt/pepper if necessary. Sprinkle the rest of the cheese on top and serve. 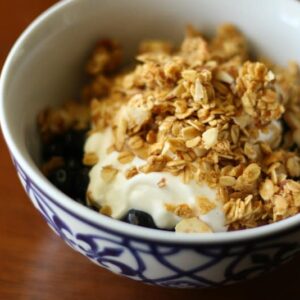 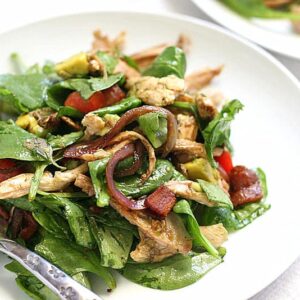 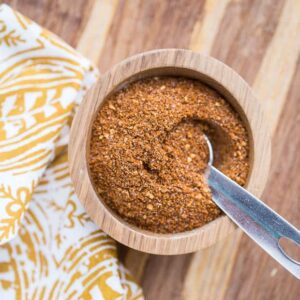 3 comments on “Roasted Brussels Sprouts and Butternut Squash with Bacon”