Goulash is a recipe that holds a lot of memories and sentiment for me.

By goulash, I don’t mean the American concoction of elbow pasta, ground beef, and spaghetti sauce. I’m talking about the Hungarian-inspired goulash stew with a fiery-colored paprika sauce.

I spent a year and a half in Austria during my early 20s as a representative for the LDS church, and fell in love with the unique mixture of German and Hungarian food that we ate.

I learned to appreciate good sausage, homemade sauerkraut, authentic apple strudel, and ate more bowls of Hungarian goulash than I could count. I also ate Nutella for the first time, so basically my time there changed my life.

Side story: I also learned what Wienerschnitzel actually is, and shake my head with embarrassment when I see the Wienerschnitzel restaurants here in the States serving hot dogs. WIENERSCHNITZEL is NOT a hot dog.

Wiener = from Wien (Vienna), or Viennese

Wienerschnitzel is actually a pounded pork or turkey cutlet that is breaded and fried and usually served with fries. It’s one of my favorite Austrian dishes — especially the “cordon bleu” version that is stuffed with Swiss cheese and ham slices. IN-CREDIBLE.

It’s a good thing we did a lot of walking around and climbing stairs in really old elevator-less buildings or else I would have weighed 500 pounds when I came home.

Ok, back to goulash. And time for another story — this one’s good because it involves yodeling.

Here’s a video to show you how easy it is!

There was an elderly woman we visited who invited us over for lunch quite often. Her name was Maria Güsenleitner, and she was Austria’s “Queen Yodeler” back in the 1940s. (Yes, that was a thing.) She was quite famous and even did voiceover work in movies during that time.

Maria was fun to chat with and she liked to show us clips from the movies in which her crisp yodeling vocals were featured.

She also made the best goulash and served it to us every time we came over. Sometimes we ate it with egg noodles. Sometimes with steamed potatoes. It was one of my favorite things to eat.

The fact that I can make more authentic goulash in my Instant Pot makes me giddy. You can also make it in a slow cooker (see recipe notes), and that version is in my paleo slow cooker cookbook, too!

Despite the hot sauce-colored gravy, this stew isn’t spicy. You can certainly make it spicy by adding more Hungarian hot paprika and maybe some chili flakes.

We ate it this particular day with some leftover Instant Pot Cauliflower Puree with Rosemary & Garlic — a PERFECT COMBO.  But, unless you have two Instant Pots or prep one of the dishes ahead of time, it could be somewhat cumbersome making both at dinnertime.

You can also serve it over rice, baked potatoes, or gluten-free noodles. And if you add a little more beef broth, you can eat it like a soup!

I’d love to hear what you think about this recipe! If you make it, be sure to tag me on social media so I can send you some love — @perrysplate or #perrysplate.

Nat's Note: A slow cooker version of this recipe is featured in my cookbook on page 162. If you'd like to use a slow cooker, sear the meat in a pan on the stove and use some beef broth to deglaze the pan, pouring everything into the slow cooker. Continue as instructed and cook it on low for 5-6 hour. 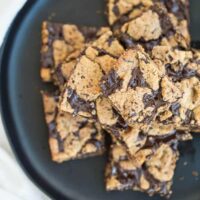 Pressure cook for 30 minutes on high or low pressure?

Sorry but you don't know what gulyas is... Your recipe may be delicious, but it certainly not gulyas..

Gulya was the name of the woman who gave me the original recipe.

In German and Austrian restaurants WienerSchnitzel is nearly always veal, but in home cooking throughout the region the veal is frequently replaced with pounded pork cutlets.

Great recipe BUT you still got the WienerSchnitzel incorrect. As you amusingly said it is not a "hot dog" but it is also neither of the two ingredients you mentioned IE; pork or turkey. It is in fact veal. With a fried egg on top with anchovies and capers it is Schnitzel a la Holstein.

Oops, yes. I meant veal, not pork. Veal is probably the most traditional way of making schnitzel, but every restaurant I went to when I lived there offered turkey as an option -- which I always ordered because I don't particularly care for veal. Either way, the preparation is the same and it's a far cry from a hot dog.