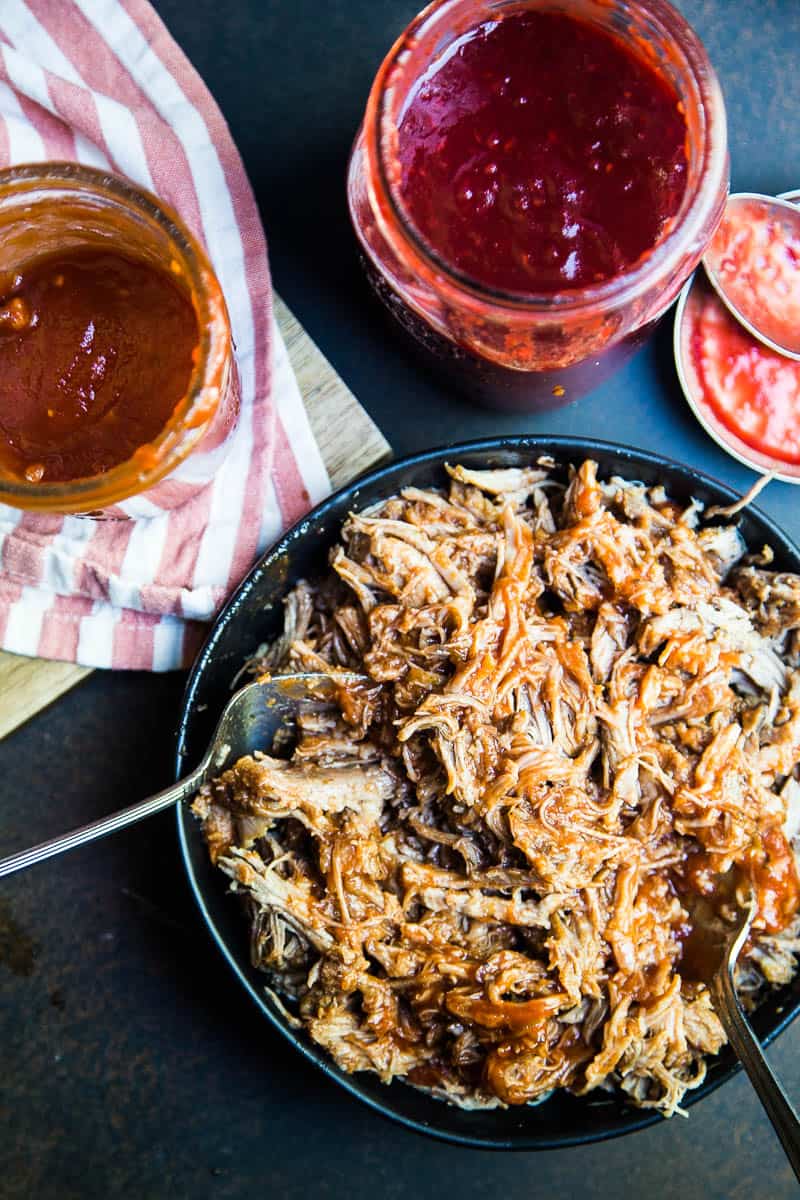 After writing two cookbooks with a total of 27 (!!) recipes for pulled meat (and five BBQ sauces) in both books, I thought it was rather sad that I didn’t have an Instant Pot Pulled Pork recipe on my site.

A total shame, right? It’s a classic recipe that everyone should have in their collection.

To be honest, I think it took me so long to do this because…

I’ve never been a huge fan of pulled pork. Or pork in general. (Except for bacon. Bacon is life.)

Writing and developing pork sections for my cookbooks converted me. Or at the very least made me moderately excited to have pork for dinner.

(Especially the Easy Pork Carnitas from my Instant Pot book. Maybe I’ll throw that recipe on my site, too. SHHH don’t tell my publisher.) 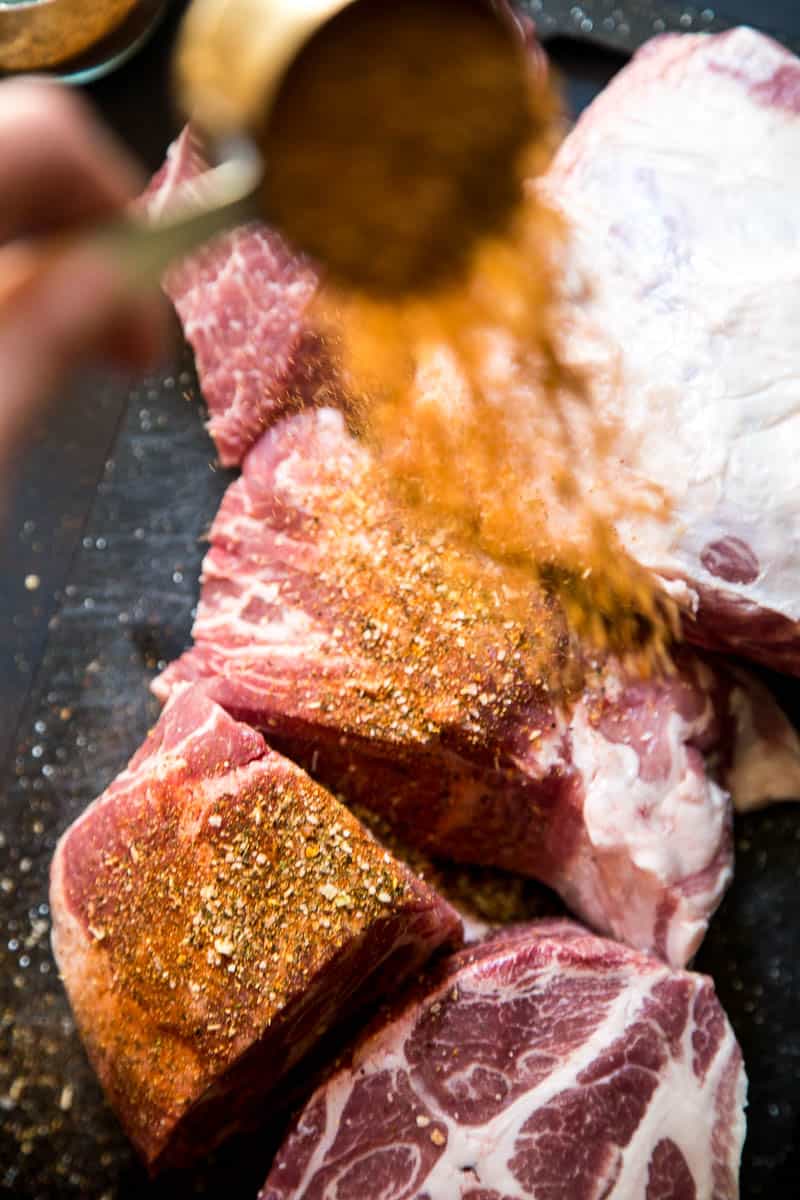 Put the BBQ sauce on AFTER you cook the pork

After making dozens (literally) of batches of pulled meat, I can tell you that it’s MUCH better to put the sauce on after you shred the meat.

You know how when you’re making a salad and you don’t get the lettuce dry enough and then the water pulls all of the dressing off the salad and ends up in a puddle in the bottom of the bowl?

That’s how it is with BBQ pulled pork. (Or pulled chicken or beef.) All of the BBQ sauce ends up in the cooking juices, which aren’t potent enough to give the meat a strong, tangy BBQ taste after it’s shredded. More on that later.

Use a spice rub

I still add a lot of flavor to the pork while it’s cooking, so I rub the meat with a bunch of steak seasoning. I make my own Homemade Montreal-Style Steak Seasoning, but you can use whatever steak seasoning you like.

You can choose to let it marinate overnight for even more flavor, but it’ll taste great if you pop it in the Instant Pot right away. 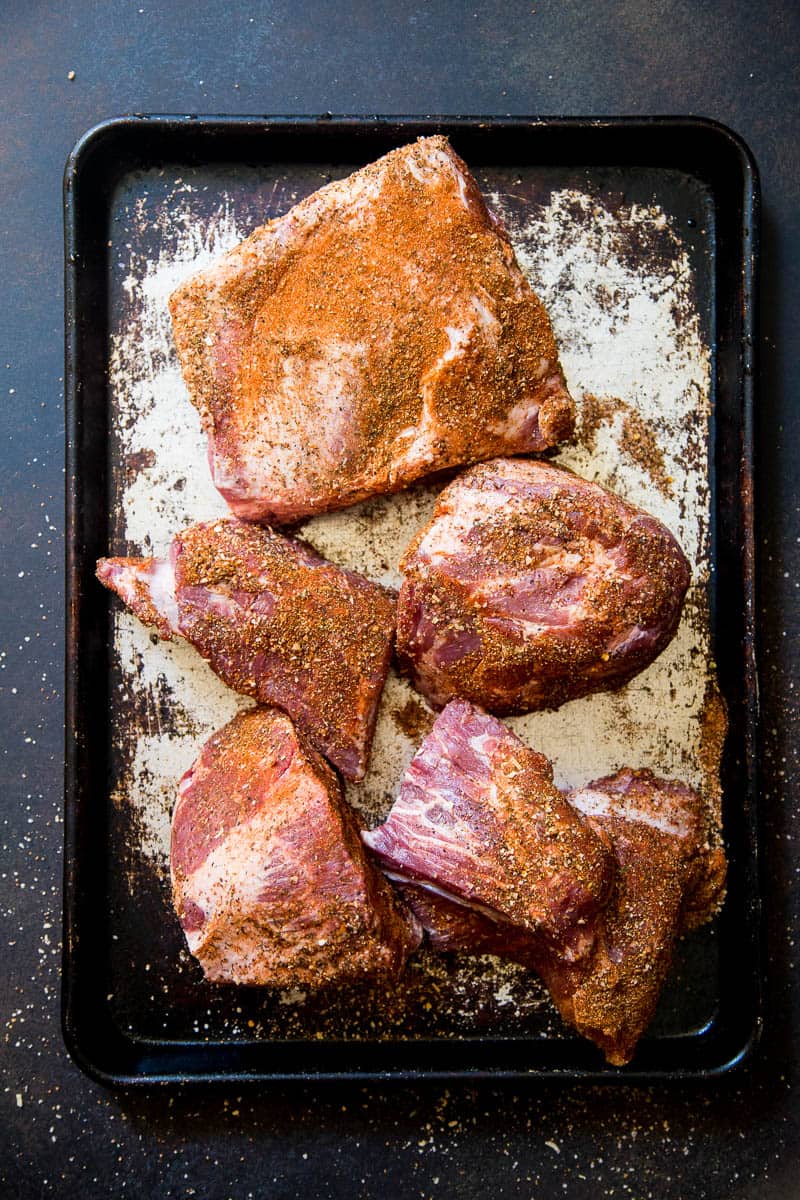 Another tip for making pulled meat in a pressure cooker: Cut large pork or beef roasts into chunks. Not cubes, but handful-sized pieces — roughly 1 pound each.

Why? It cooks MUCH faster this way AND there’s more surface area for the seasoning. And faster, tastier pulled pork is better, yes? (Don’t get me wrong — slow cooker pulled pork is pretty amazing, too, but we don’t always have 8-10 hours or plan ahead like we should.)

Use roasts that have a lot of fat

That up there is an 8-pound bone-in pork shoulder roast. Or butt roast. (I’ve never understood why it’s called that. It’s not really the pig’s butt.) I don’t like using pork loin roasts because they usually turn out really dry. There’s more fat on the shoulder roast which keeps it tender and moist.

I cut that big roast it into 6 pieces. Because of the bone, I couldn’t make them all the same size, but it’s good if they’re similar in size. Shoulder roasts are pretty forgiving, so don’t worry about the smaller pieces getting overcooked.

You can use a bone-in or boneless pork roast. One thing though . . .

AN 8-POUND BONE-IN SHOULDER ROAST WILL NOT FIT IN A 6-QUART INSTANT POT.

I found this out as I was prepping mine. I had always bought smaller roasts, but I only saw 8-pounders at the store that day.

Luckily I have 2 6-quart Instant Pots (I use both of them simultaneously more than you’d think!) so I put half of the meat in each.

I don’t have an 8-quart Instant Pot, but I’m fairly certain it would fit. 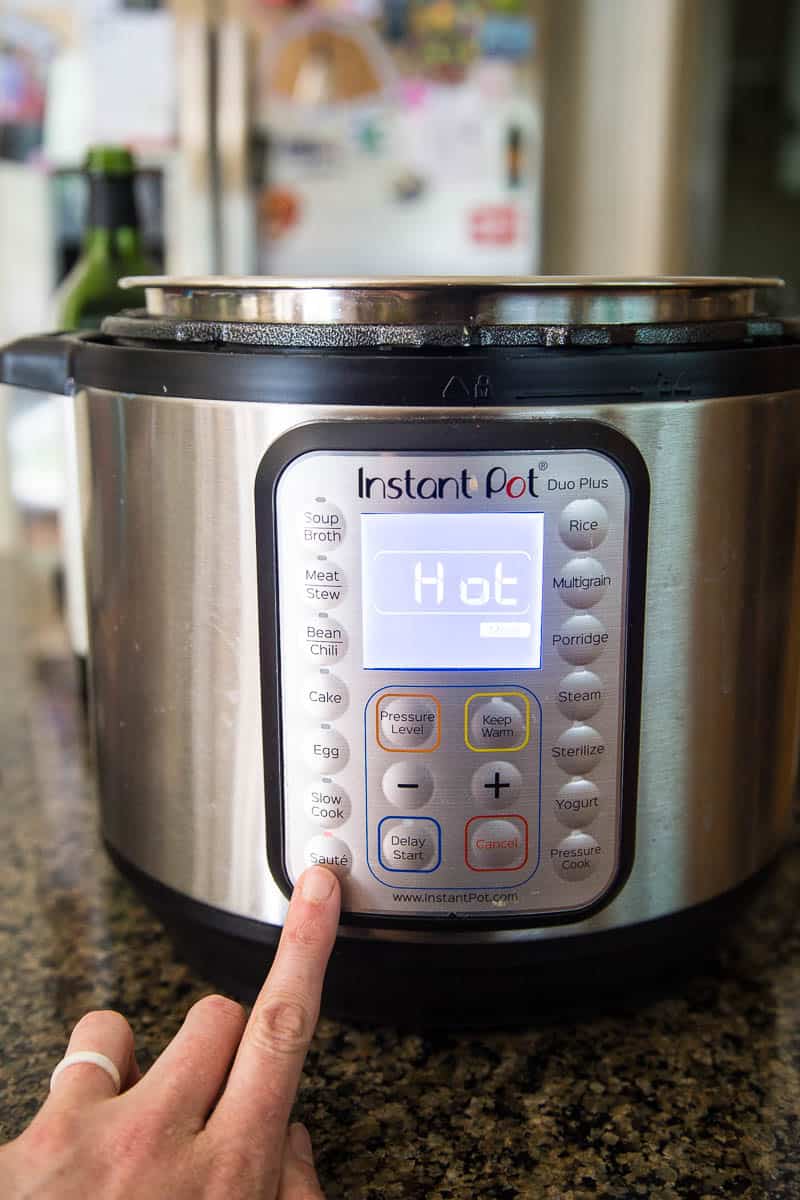 Sear the meat before you pressurize it (if you can)

Another way to boost flavor in pulled pork is to sear the meat before you cook it. This used to be a really fussy step, but because you can sear AND cook meat in an Instant Pot it doesn’t feel like such a hassle anymore.

Make sure your Instant Pot is FULLY PREHEATED (it says “Hot” on the display) before you put the meat in. Otherwise you’ll end up steaming the sides and that doesn’t produce crispy edges or caramelization. 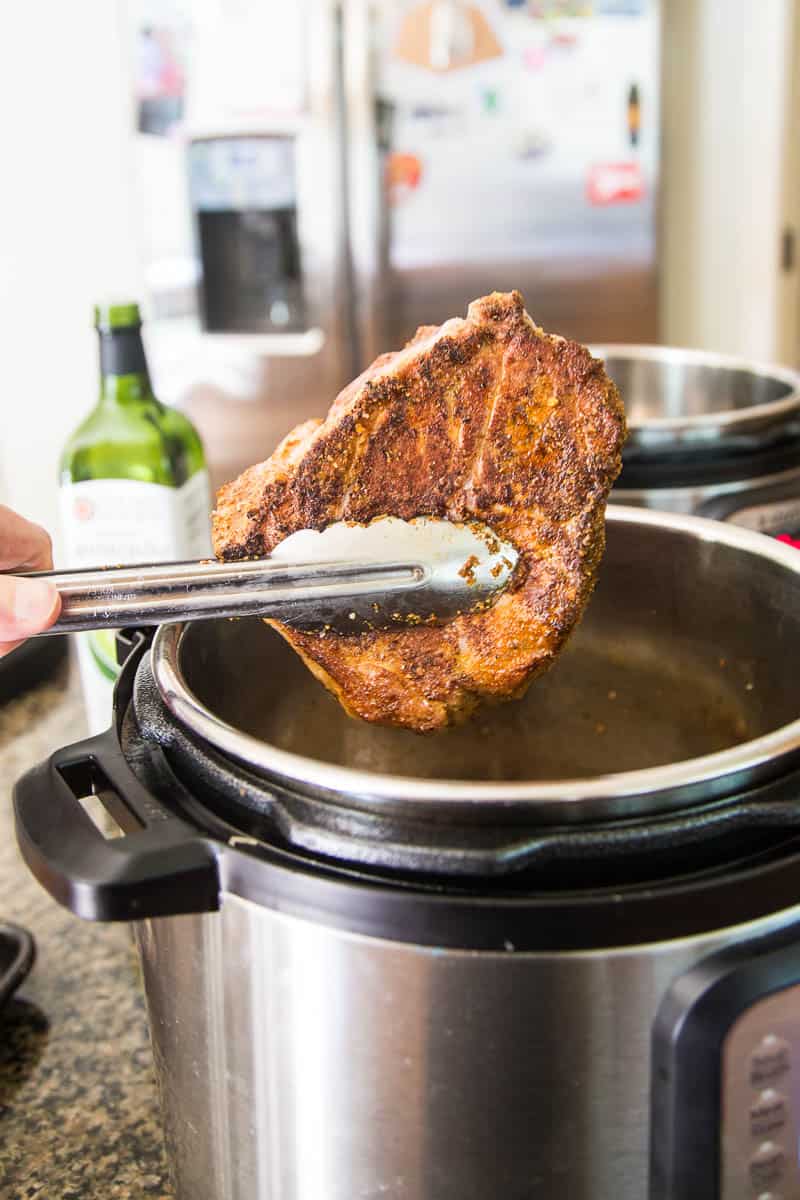 I put two pieces of pork roast in there at a time and formed good sears on both.

After that I put some chicken broth in there to deglaze the pot (it loosens the crispy bits stuck to the bottom) and give the pot enough liquid to produce steam in order to pressurize the pot.

Then I returned all the meat to the pot(s) and cooked them for about an hour each. I put some notes on cooking time for different weights of meat. Just check the recipes notes.

There are two kinds of steam releases — natural release and quick release.

For large cuts of meat like this, I highly recommend that you let the pressure cooker release steam naturally.

This takes about 15 minutes depending on what you’ve got in the pot. This also allows the meat to rest for a bit before you shred it, and it will also help the meat to shred more easily and be more tender. 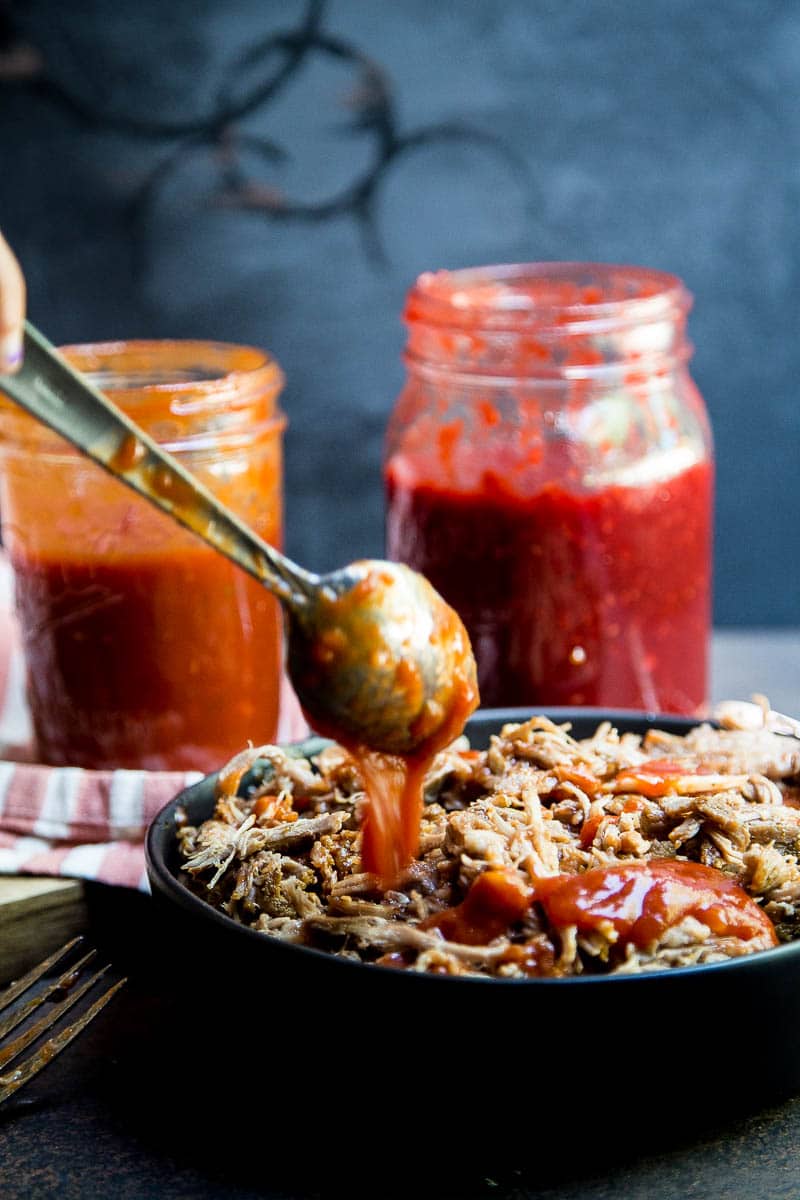 If I put all of the meat back in the pot with the liquid and THEN put the BBQ sauce in there, it would be really soupy. And I’d be bummed that the BBQ sauce would be watered down and not as tangy and delicious.

Trust me on this one.

Now for the good part — the BBQ SAUCE. Or sauces.

My all-time favorite BBQ sauce is this Balsamic BBQ Sauce I use on a grilled chicken recipe, but it’s also good for pulled pork.

I made a couple more sauces to use for pulled pork that I posted last week — Honey Lime Ginger BBQ Sauce and Low-Carb Raspberry Chipotle BBQ Sauce. You could use low-carb sweetener in the first sauce, too, if you like. Both sauces are super delicious on pulled pork and can be made several days ahead of time. 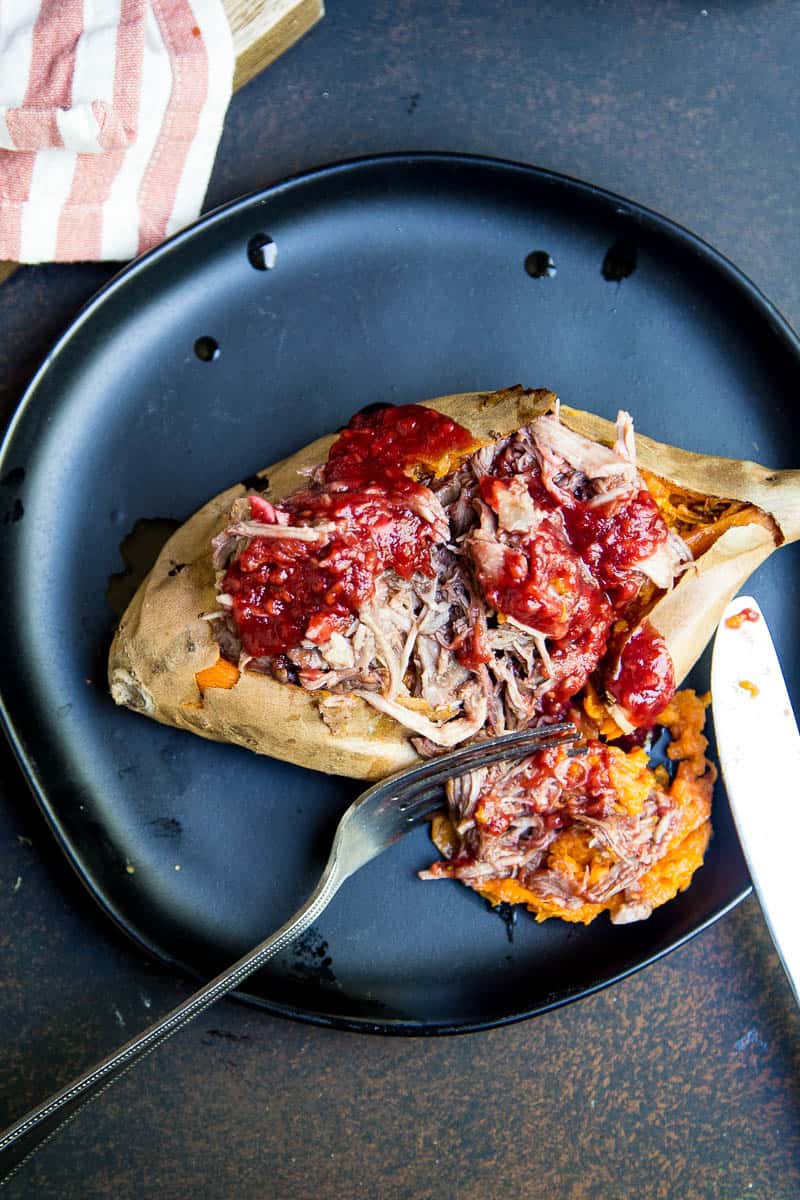 How do you like to eat BBQ pulled pork? We don’t typically use buns. Sometimes we’ll use toasted sourdough bread (if I happen to get adventurous and make some that week), but I really love the meat and sauce on baked potatoes — particularly baked sweet potatoes.

It’s also good to make into a BBQ pulled pork salad. Pro tip: save some of that BBQ sauce and mix it with paleo ranch to make some fabulous BBQ ranch dressing for your salad.

Simple roasted or sauteed vegetables are great with it, too! Like Magical Sauteed Green Beans, Sweet Potato Fries, or Parmesan Roasted Broccoli.

1. You can use whatever BBQ sauce you like! I have a few homemade BBQ sauce recipes on my site -- Balsamic BBQ Sauce, Honey Lime Ginger BBQ Sauce, and Low-Carb Raspberry Chipotle BBQ Sauce. 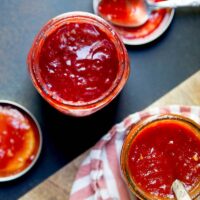 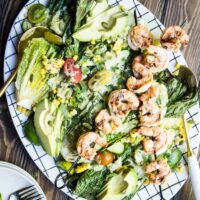