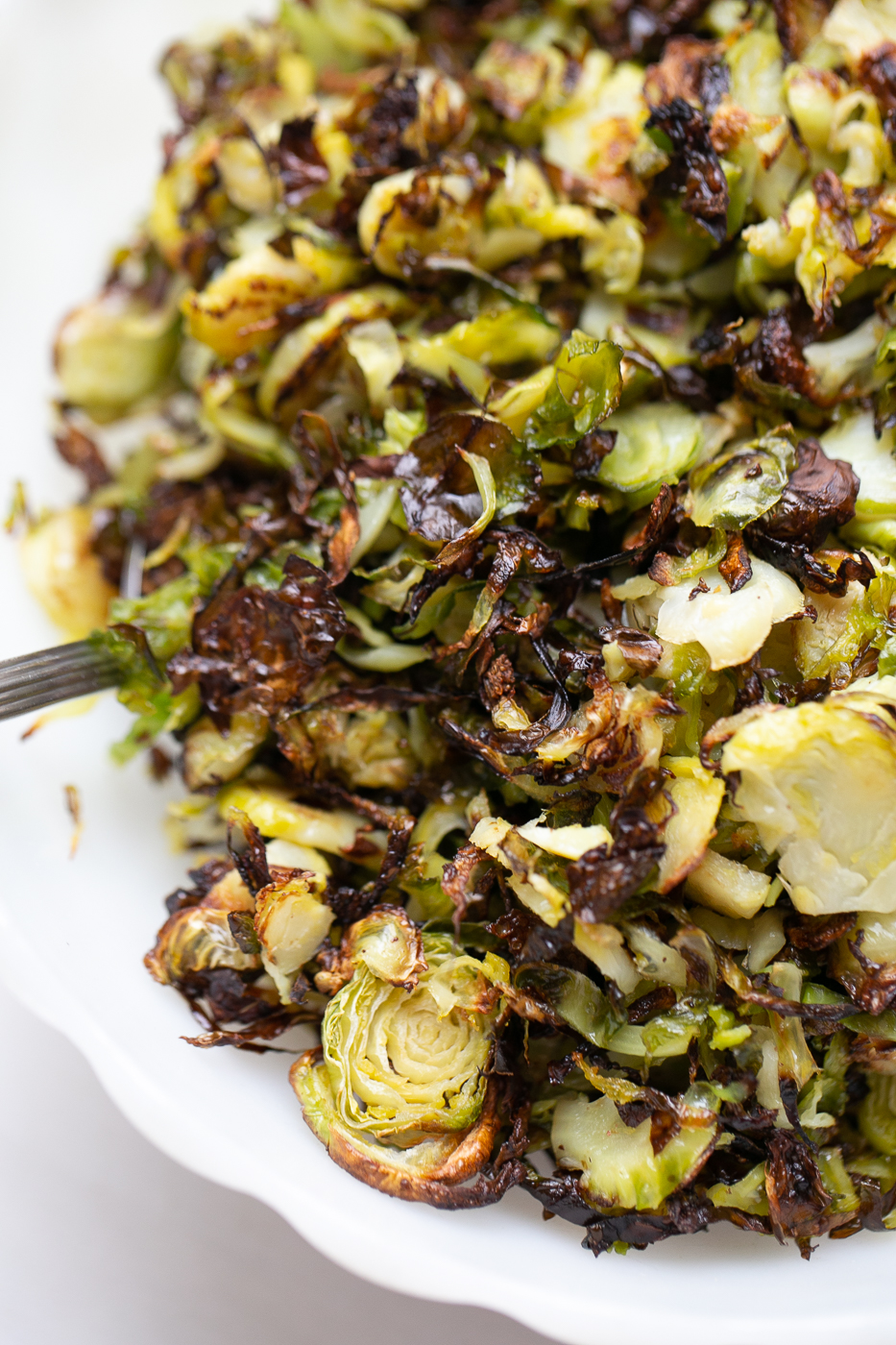 Ok, first off, do you call them Brussel sprouts or Brussels sprouts?

I had to look this one up — it’s actually BRUSSELS sprouts. As in Brussels, the city. And the B is always capitalized.

I totally drop that S when I say it, though. But if I know something needs to be spelled a certain way, I can’t ignore it. Even if it’s awkward. #nerd

How do you get someone to like Brussels sprouts?

Before we moved to Nevada, my best friend in Cali (and her husband) took us out to eat at a swanky little place called Neumanali for what turned out to be one of the best (if not THE best) meals of my life.

One thing that I particularly loved was a side of roasted shredded brussels sprouts.

I was determined to recreate them in my own kitchen, and I think I did a pretty good job.

So good, that my kids will occasionally eat these. And I’ve converted many a Brussels sprout hater with this one.

Brussels should never be boiled. Ew.

I distinctly remember the first time I ate a Brussels sprout. I had gone to one of those buffet places with a giant salad bar with a couple of friends. (Fresh Choice!) They had some cold, boiled Brussels sprouts in the salad bar, so I grabbed one.

We never ate Brussels as a kid. My mom had never liked them either (until I converted her to roasted ones. Why wasn’t roasting vegetables a thing in the 80s/90s???)

So I decided that was that day I was going to try one, despite their reputation as being a horrible task to push through to get a dessert.

I put it in my mouth and chewed for a second. It came out immediately.

I’m not a super dramatic, spitting-out-food type of person. It rarely happens. But when that bitter, slimy sprout hit my tongue, I wanted it out as soon as possible.

NO WONDER why they’re hated so much! They can be sooooo nasty if they aren’t prepared well! Can I just suggest that we quit boiling all vegetables? There has to be a petition going around. Or some legislation we can pass.

OK, boiling potatoes is fine. Because I’m not sure I want to live in a world without mashed potatoes. 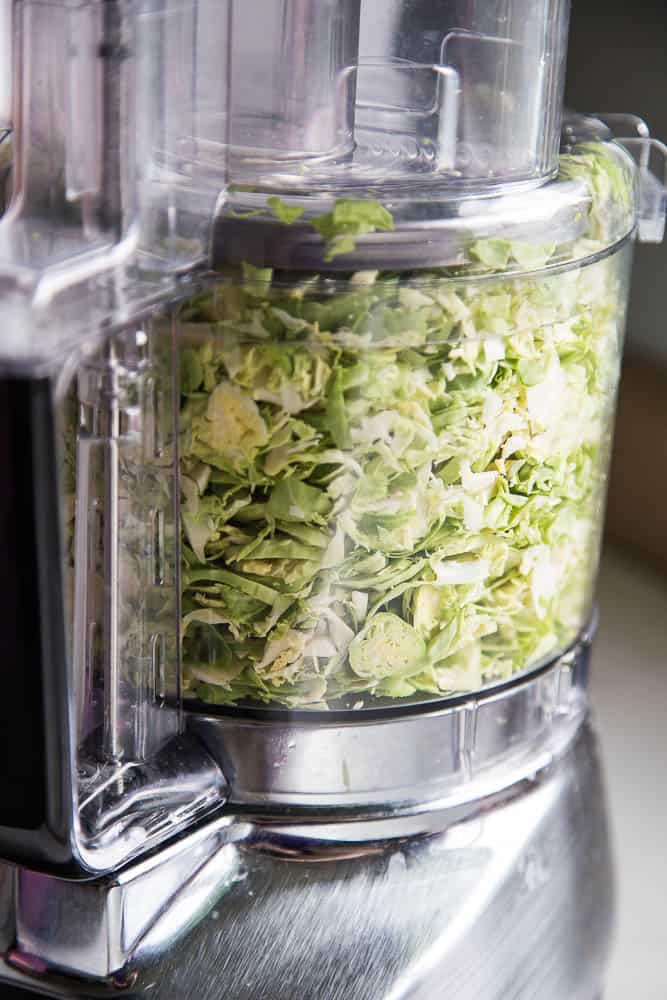 I included a full recipe for baked brussels sprouts below, but really… you don’t need a recipe for this. Here are the basic instructions.

How to Shred Brussels Sprouts 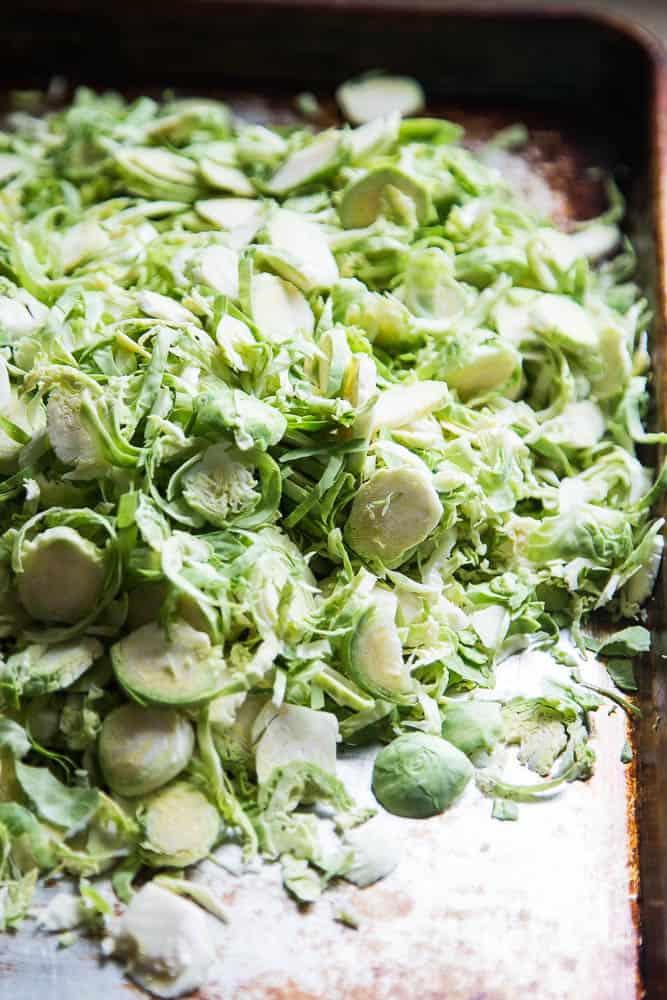 When I started making these, I’m a little embarrassed to admit that I sliced them really thinly with a knife by hand for about a year — while standing a foot away from my food processor. It never occurred to me to use it. *facepalm*

You can use a slicing blade (what I do) and shave them or just toss them in there and pulse until they’re shredded well.

Either way using a food processor or some kind of gadget that will slice them for you will guarantee you will make these more than once. And possibly on a weeknight — they’re that easy.

Now that I’ve seen the light, I can whip these up so much faster.

(Update: You can actually buy shredded or shaved Brussels sprouts at the grocery store now. I’m so glad the world is headed this direction.)

Since these cook up quickly and shrink up quite a bit, you can load that baking sheet full and still get a good toast on them. Just toss them around a few times during roasting and roast them longer if you’ve got a full pan. 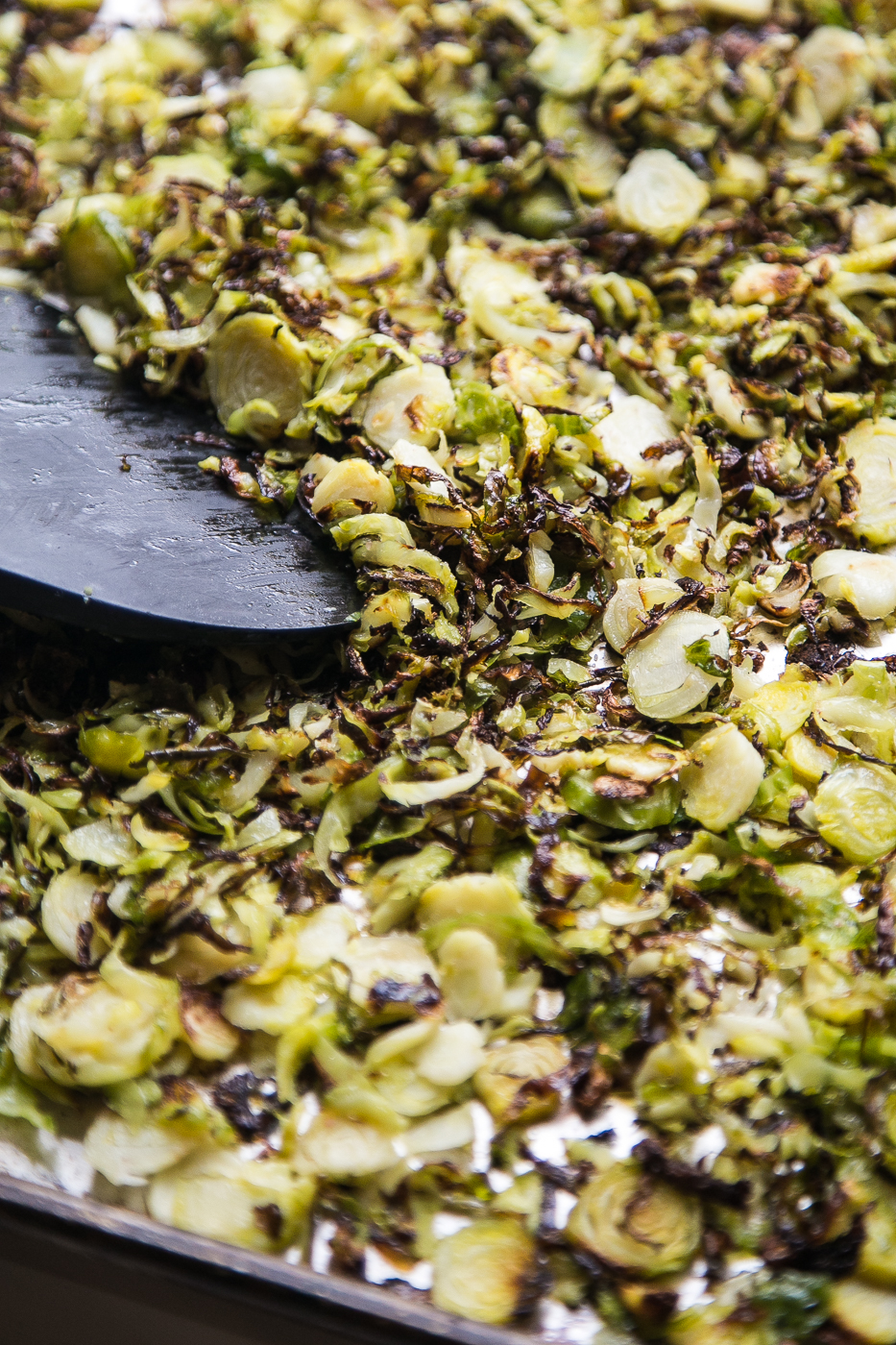 As far as side dishes go, this is one of my favorites! It’s easily customizable, too.

We love Parmesan cheese on ours (sprinkled on during the last few minutes of roasting). A squirt of lemon juice or a drizzle of balsamic vinegar is great, too.

I’ve heard people roasting them with maple syrup, too. (Perfect for a Thanksgiving side dish!)

If you get ambitious and want to shred more Brussels for later you could always make this Apple and Brussels Sprout Slaw from A Mindfull Mom! OR air fry them with this Air Fryer Brussels Sprouts recipe on Vegetarian Mama. 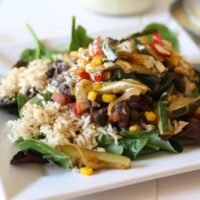 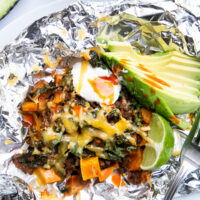 You sold me when I read your narrative about the boiled sprout & your subsequent discovery of a better way. I'm looking forward to finally being able to enjoy this remarkable vegetable with your recipe. Thank you!

I'm making these for Christmas dinner. Both of my tweens (even my very picky son) like roasted Brussels sprouts. They've never had them shaved, though, and I think they're going to love the crispiness!

I hope they liked it!

I can’t figure out how to attach a picture but MAN I wish I could. Beautiful delicious easy

I just used this as a base recipe for some extra large slightly wilted Brussels sprouts left over from the holiday. I’m cooking a pork loin in the oven and during the last 15 minutes of cooking surrounded it with the shaved Brussels drizzled with a garlic powder, olive oil and balsamic marinade I had used on the pork. OMG it’s AMAZING

My husband and I like all the ingredients, and followed the recipe and instructions exactly. "Leathery" is the word that comes to mind. I think brussels sprouts are simply a vegetable that does not roast evenly and so what I ended up with was stem ends that were crunchy, some that was wilted and some that was charred. I threw out half of husband's helping and the leftovers. I will not make these again.

I'm sorry these didn't work out for you. Were they shredded evenly? Sometimes that makes a difference. Also, it sounds like the oven temp may have been a little hot. Sometimes ovens don't heat to the temperature on the read-out. I hope that helps.