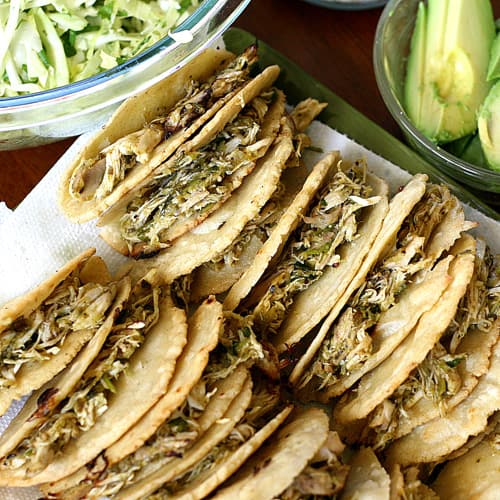 I’m so in love with crispy tacos. Not the crispy tacos made from the shells you buy at the store, but from (preferably homemade) corn tortillas.

In a nutshell, you fry the tacos (with the filling already inside) in a little oil until they’re crispy. If you’re a Pioneer Woman fan, you may have noticed the chicken taco recipe she recently posted to her cooking site. These ones are similar, but much easier, I think.

I made tacos for the first time like this a couple years ago when I discovered the Crispy Black Bean Tacos from a Bon Appetit mag, but never played around with fillings. That vegetarian version has graced our table many, many times. 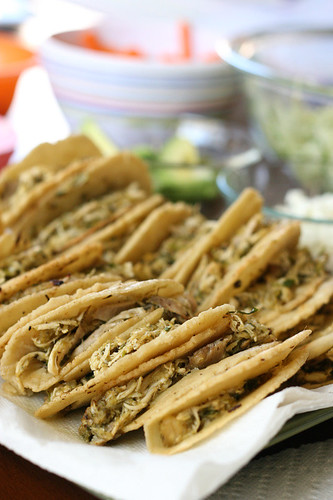 There’s another reason why I’m excited for this post. This first variation was actually a collaboration between myself and a real-life friend (Mindy) who lives 600 miles away. Mindy, who runs the book review blog  Reading for Sanity, emailed me one day and told me that she’d used my taco seasoning to make some pretty wicked chicken tacos. . .

Since I had planned on roasting a chicken in the next week or two, I tucked away the idea until I had some leftovers. Because I can’t leave well-enough alone, I added a variation of Southwestern Cabbage Slaw (which tops pretty much every taco I make), used cotija cheese (that’s what I had), and fried them in a little oil.

Uh yeah… any other recipe I find that calls for leftover shredded chicken better have a lot of potential because if not, that chicken will turn into a taco every time.

Fast forward a couple of weeks… I had more shredded chicken in the fridge along with some salsa verde I made on a whim (see my previous Roasted Tomatillo-Chipotle Salsa post about my impulse tomatillo purchase).

In the meantime I had also purchased a tortilla press

on Amazon, which made smaller and thicker tortillas. You can see the difference by comparing the photo above (hand-rolled) with the photo below (pressed). I’m OK with either kind, although the smaller, thicker ones were harder to manage while frying.

Anyway I made the same tacos again using salsa verde instead of taco seasoning. Another fantastic taco! There are so many variations you could do with this. And the best part is that it’s super fast and easy!

Thanks for the inspiration, Mindy!

And although I don’t really celebrate Cinco de Mayo, I just like any excuse to eat Mexican food. So if you do celebrate (for real), have a good one!

You could also fill the tacos with my Slow Cooker Green Chile Chicken or the Best Instant Pot Shredded Chicken for Tacos! 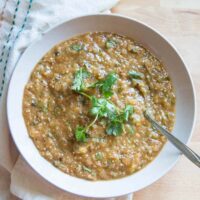 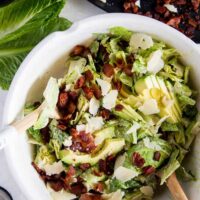 But wait, your website says "paleo". Does "progressively paleo" mean not really paleo? Corn? Really? On what planet is corn paleo?

Those look SO good. I've been craving fried tortillas lately so I made baked taquitos today. I just brushed on some melted butter and they were almost like fried. But this way with just 1/4 cup oil sounds good, too! I have a tortilla press too but it's useless. At least for flour tortillas. They always come out tiny and super thick.

I love your pictures! Nice and vibrant.

Thanks so much for the link! My family is going to have a taco night now!

This sounds so delicious!!! I'm having a slight problem though, the taco seasoning link isn't working... Can't wait to make this... soon!

Shaina I'm sorry about the link! Some of the links within the posts aren't working because of the recent changes in the site. The taco seasoning post is still there, and I updated it within the text. I'm not able to place links within the recipes right now so here's a quick link: https://www.perrysplate.com/2008/11/perrys-plate-taco-seasoning.html

I know the black bean taco recipe you speak of and it's one of our faves! I always bake mine instead of frying, though, and I'm sure I'm missing out ;)