This is the only gluten free pie crust you’ll ever need — and without xantham gum! Truly. It tastes better than most traditional pie crusts, and you can even work it into a lattice!

When I decided to make a million pies for Thanksgiving (OK, eleven) I made the potentially disastrous choice of making all glute free pie crusts.

Why potentially disastrous? Because I’d never made a gluten free pie crust recipe, and I didn’t do a test run. (Gluten free baking can be finicky.)

Also we were having company for the big dinner.

I live on the edge, what can I say?

Luckily it was SO good. Like, if someone made me a pie with this gluten free pie crust recipe, I would never know it was gluten free crust. Honest. This flaky crust is even better than most traditional pie crusts I’ve eaten. (I’m a pie crust snob.)

All I did was take an all-butter version of my Grandma’s flaky pie crust recipe and use a gluten-free flour blend. That’s it.

Her recipe has an egg and it’s very forgiving, so I figured that would give me a head start.

I’ve played with this recipe before, substituting whole-grain flours, but this variation is by far the best. It tastes and feels almost identical to the original. (I’m curious to see if Grandma would even notice…)

AND there’s no xanthan gum. Using xanthan gum doesn’t bother me, but I know some people don’t like hunting down ingredients that are unfamiliar that they might not use often. So, you’re welcome.

The flour I used is an adapted version of the King Arthur Gluten-Free Brown Rice Flour Blend Recipe.

IMPORTANT NOTE: If you try this recipe with other gluten free flour blends, I can’t guarantee it will turn out well. Also, this recipe will not work with almond flour, cassava flour, or coconut flour.

Since the website with the recipe isn’t online anymore, here’s the recipe:

I’ve been using this gluten-free flour mixture a lot lately, and it’s my current favorite. The ingredients are all easy to find, especially if you have a grocery store with a bulk section.

(If you are baking for someone with severe gluten allergies, then bulk bins aren’t a great idea because the risk of cross-contamination is higher.)

Using a food processor to make pie crust changed my life. A pastry blender (or a pastry cutter) and a large bowl get the job done. So do a couple of forks, but by the time you finish cutting the butter into the flour you’ll want to stick a fork in your eye.

And that reminds me — yes, I use cold butter. You can probably use palm shortening for a dairy free option, but I make no promises about the outcome. I use Kerrygold grass-fed butter because it tastes amazing. And because, butter.

Just toss that flour and salt into the work bowl, give it a buzz, and then drop pieces of butter in and pulse it up.

Leave some larger chunks of butter in there and don’t blend it too much.

Here’s the important part. Have a big glass of ice water ready, and measure out 1/4 cup of the water. Break an egg into it and beat it with a fork.

Then pour it into the dry ingredients and pulse some more.

Until the dough starts to gather to one side of the processor in a big clump.

Empty the dough out onto a floured surface, split it in half, and shape it into two disks.

Cover them with plastic wrap and chill for about 30-40 minutes. You want the dough to be cool to the touch, but not hard.

Now we move to my countertop with the ugly sand-colored formica. Sigh.

Flour the surface and use a rolling pin to gently roll out the dough. Move from the center of the dough out toward the sides in all directions. You’ll want to work quickly, too, because as the dough warms up to room temperature it’ll be more difficult to work with.

If you happen to have a pastry scraper you’re in good shape. You can also use a metal spatula.

TIP: Laying a piece of parchment paper or plastic wrap on the counter makes it much easier to transfer the rolled dough to a pie plate.

I like using glass pie plates because you can invert it on the rolled out pie crust dough and see exactly how much you need to roll out your dough.

Slide it around the edges of the crust to release it from the counter and then gently transfer it to a pie plate.

Sometimes it will tear a little, but just pinch it back together.

Trim the edges if there’s more than 1/2 inch hanging off the plate and then tuck the edges under to clean it up.

I like to crimp the edges with my knuckle because Grandma always crimps hers, and I think it looks prettier than using a fork around the edges which also flattens it and make it burn more easily.

Did I mention this recipe makes a double-crust pie? Or two single-crust pies.

At this point you can add your pie filling to the bottom crust and bake it like normal! Or use it to make a double crust pie.

How to Blind Bake or Pre-Bake a Pie Crust

If you’re going to pre-bake it, prick the bottom of the crust with a fork so it doesn’t bubble, cover with parchment or foil and add some pie weights or dry beans. Then toss it in a 400 degree oven until golden brown — maybe 15-20 minutes.

Remove the foil halfway through baking to get it a nice light golden color.

I don’t have pie beads, weights, or dry beans so I just lightly press foil onto the crust and cover the edges.

Ready to be filled!

I used this crust for 7 of these pies — including the heart cut outs and the lattice. The lattice on the apple pie was a little tricky, but I thought it worked out beautifully!

By the way, if you want to know the details and recipe sources for those pies, you can find that on the Instagram post.

I also filled one with Cleaned-Up Chocolate Silk. You may want to get in on this. It’s a naturally sweetened chocolate silk pie and the only dairy is grass-fed butter. It’s rich and decadent and delicious.

Obviously this recipe works beautifully for sweet pies This gluten free pie crust works well for savory pies, too! It makes a delicious top crust for a chicken pot pie.

How to Freeze Pie Crust

If you’d rather make your pie crust ahead of time, here are a few ways you can freeze it:

The step where you form the dough into a slightly flattened disk? Instead of putting it in the fridge, wrap it again with some foil and stick it in a freezer bag. You can fit several crusts in a gallon bag, so this way saves a lot of space. Lasts a couple months in the freezer.

TO USE: Let it thaw for several hours — the last couple of hours can be room temperature. It should be somewhat chilled when you roll it out.

This option works whether you plan to pre-bake your crusts or not. Roll it out and form it in a freezer-safe pie plate. Cover the whole thing with plastic wrap and a layer of foil and then freeze. I wouldn’t leave this in the refrigerator for more than a week because it has a higher chance of drying out since it’s already rolled out.

TO USE: Thaw it out (but at least keep it chilled — room temperature is like death to a pie crust) and either pre-bake it or fill it and then bake. This probably goes without saying, but DON’T put frozen Pyrex dishes in a hot oven unless you plan on making a broken glass/pie dough mosaic art piece.

Wait until the crust cools, wrap it in plastic wrap and foil and freeze for up to a week. Honestly, I probably wouldn’t do this unless I was REALLY pressed for time for Thanksgiving pie making on the actual holiday because the pie crust could dry out really easily and you may run the risk of breaking it while trying to wrap it.

TO USE: Let it thaw somewhat so it isn’t icy when you add your filling.

Can I make this pie crust dairy free as well?

Vegan butter has better flavor than palm shortening, though. Straight coconut oil was the most difficult to work with and gave the crust a pronounced coconut flavor which might not work, depending on the type of pie you’re making.

If you’re using vegan butter make sure to use the stick form instead of the tubs since the fat/water content differs and will affect the outcome of your pie crust.

Here are a few recipes on my site that use this delicious Gluten-Free Pie Crust recipe!

Recipes to use Gluten-Free Pie Crust

Grandma Inez’s Pineapple Pie is at the top of this list. It’s my favorite pie in the whole world. If you’ve never had it, it’s like a pineapple version of lemon meringue. 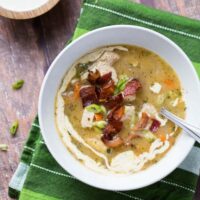 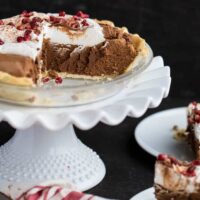 Natalie , can you use white rice flour instead of brown ?

Hi Natalie , can you use white rice flour instead is brown ? The bobs red mill only has white rice at my store ? Also the potato starch is hard to Find , any replacement ? Ill order online if I need to . Thanks

This is a great recipe. I was never great at pastry even before our grandson and then others diagnosed celiac GF. I have had many failures and was ready to give up until now! It turned out perfect and also appreciate the mock King Arthur flour recipe, I live in Western Canada and it is not available here. Thanks so much for this easy, delicious recipe. Rhubarb pie for dessert tonight🙂

I'm so glad it was a success for you! Rhubarb pie sounds delicious!

I believe you can use the KA blend you have. The recipe I use is a mock version of that one.

Any suggestions on this recipe without using egg? I’m gf and allergic to eggs ?‍♀️ And have yet to find a good crust option.

You could try using a chia egg? I've never used a chia egg in this crust, so I can't guarantee it will work. Leaving the egg out might be OK, but the crust will be much harder to work with.