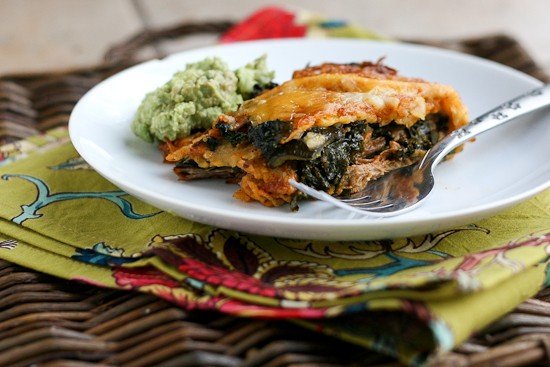 Oh, gosh. I’m so into these layered enchilada things. Have you tried the Stacked Roasted Vegetable Enchiladas that exploded all over Pinterest?

I was so excited about them that I made Stacked Chicken and Zucchini Enchiladas with Creamy Green Chile Sauce.

I thought there should really be a beef version, so I took some of the leftover shredded beef and sauce from the Taqueria-Style Shredded Beef recipe and made a third member of this little stacked enchilada trio. 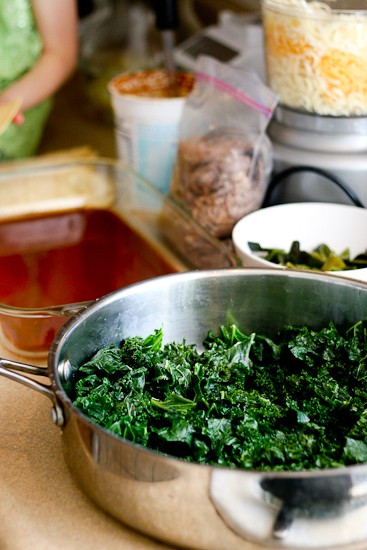 Whenever I make something like this (a cheesy, grain-loaded meal) I try to cushion the blow by doing two things — 1. to make it at least gluten-free (Steve and I feel a lot better afterward) and 2. to stuff as many vegetables as I can into it.

I think three poblanos and two whole bunches of kale was sufficient. By the way, it’s a frightening amount of kale, but keep in mind that it does cook down. I have to remind myself still. 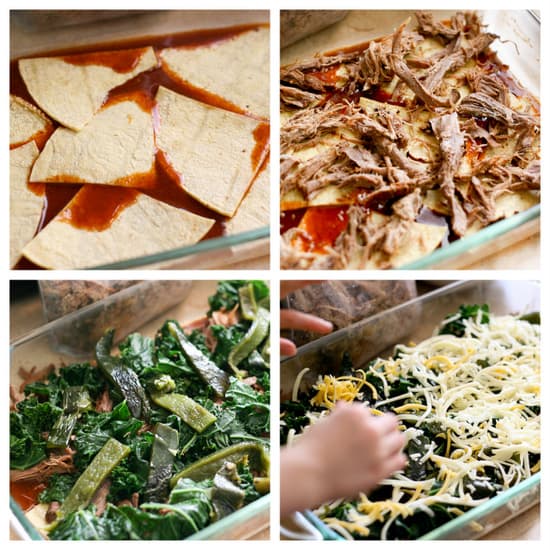 If you go from zero to enchiladas in one day you’ll be completely exhausted. To make it easier, add these Shredded Beef and Kale Enchiladas to the same weekly menu as a slow cooked beef recipe. Then you’ve got the beef (and maybe the sauce) sitting in your fridge, and all that remains is the vegetable prep and assembly. (Both of which can also be done ahead of time.)

And by the way… I got a lot of suggestions to include more freezer-friendly meals. Well, THIS IS ONE OF THEM.

I’ve frozen the roasted vegetable version as well as this beef version and they cook up great after their cryogenic naps. You’ll have to double the cooking time when they’re frozen (and try to use metal or foil pans because frozen glass may explode in a hot oven), but you’ll have more time to do other things.

Like scrape dried baby peas off the kitchen floor. Or take a shower.

Hopefully your life is a little more glamorous than mine. :) 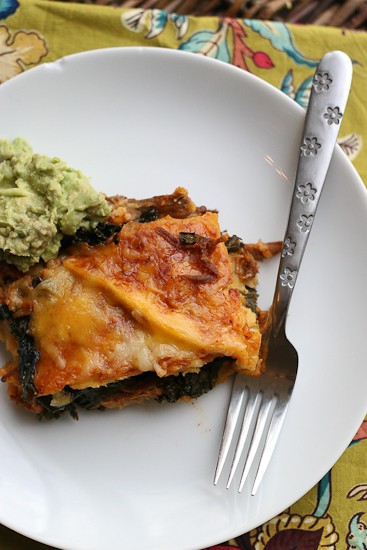 You could also use some leftover Slow Cooker Green Chile Chicken or Slow Cooker Chipotle Shredded Beef in this! 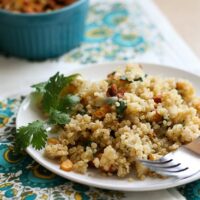 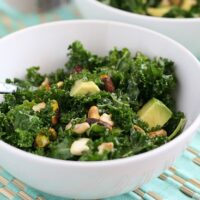 Oh you knooooow I'mon' love this.

I ALWAYS choose to make stacked enchiladas over regular ones....so much less work!! And you can get more filling in there. Which I love.

All this kale makes my heart happy.

Oooh, I really do love the look of these enchiladas. That shredded beef and all the deliciousness packed in there looks mouth-watering! :)

I LOVE that you added kale to your enchiladas. YUM!

I love it too. I pretended that it cancelled out the tortillas. And the cheese. And the big glob of sour cream on top. (oh dear)

LOVE THIS. I have been wanting to make stacked enchiladas ever since I saw your veggie ones all over the Pinterest but I just haven't gotten around to it. This has convinced me to bump it way up on the priority list. YUM!

Awesome! Let me know if you make it!